Comic-Con sideshows: the $6 million yacht, the preacher, the cigarette bummer 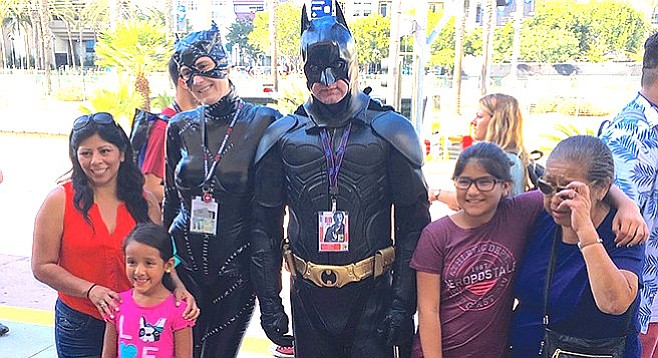 Mark came to Comic-Con from Laguna aboard his friend’s 85-foot, $6 million yacht Motown, a sleek gray vessel tied up alongside the Embarcadero just south of the convention center. “I’ve been here every year for the last ten years,” he says. “I bring my son and his buddies from all over the place; I enjoy watching them have a good time. He’s been into writing his whole life, and he goes to the breakout sessions about that. Usually, we’re at it from early in the morning to late at night. But this is our first time coming on the boat, so I’ve spent a little more time relaxing.” 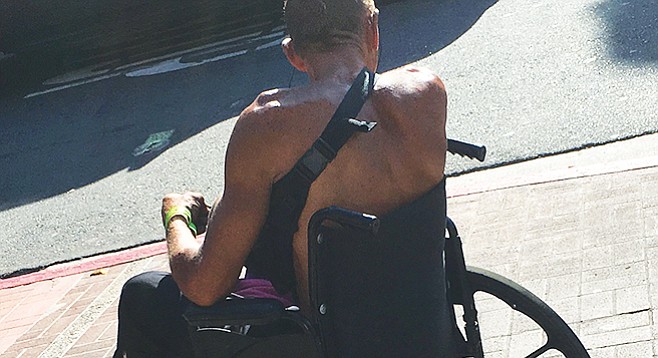 “Anybody got a cigarette with them?"

Just now, the boys are stretched out in the sun on Motown’s decks, within sight of the thousands of people hiding from that same sun under the hundreds of tents that make up the line for Saturday’s Hall H presentation from Marvel studios. They are here for proximity and priority: to be near the screen gods and goddesses who grace the Hall H stage, and to hear the good news of what’s to come a few minutes before the rest of the webbed-up world. Inside one, a father pours water over his infant son’s head to keep him cool; across the sidewalk from him, cool kids play cards and drink bourbon inside another.

Jeff from Lake Murray Church is here preaching at the corner of Fifth and Harbor because “This is my parish, and these are my parishoners. It’s a hard crowd. But we proclaim the Gospel message that God was in Christ making the peace with the world, and he says to the world, ‘Make peace with me.’ Look at that massive amount of people. They’re all eternal beings. They all have an eternal destiny. Our exhortation to them is, ‘Why follow something that is a fantasy when you can know the living God?’”

Older marrieds Raymond and Julie are here dressed as Batman Begins–era Batman and Batman Returns–era Catwoman. This is their fifth visit, but only their second in costume. “The kids get a kick out of it,” says Raymond as Julie lifts a bead of sweat off his chin. “They smile, want their photo taken. It’s fun to make a little kid’s day.”

“And it’s a little for us,” says Julie. Last year, she came as Captain Marvel because the heroine is “badass and tough.” (She got the costume custom-made through Etsy.) This year, Raymond picked Batman, “because he’s the antihero.”

The Chairman is here at the corner of Fifth and Island because, as he mutters to himself, “A lot of people out and about today.” He plants his wheelchair expertly in the middle of the sidewalk; the stream of Comic-Conners parts effortlessly around him. He wears no shirt; his skin is cracked leather, broken below the elbow. “Anybody got a cigarette with them? Anybody got a fucking cigarette? Any of you fuckers got a cigarette? Fucking faggots.”

Fifty feet away, Batman and Wonder Woman pose for a photo.