"‘Cheese Sandwich’ is about when Kelley and I were living in the back of a U-Haul." 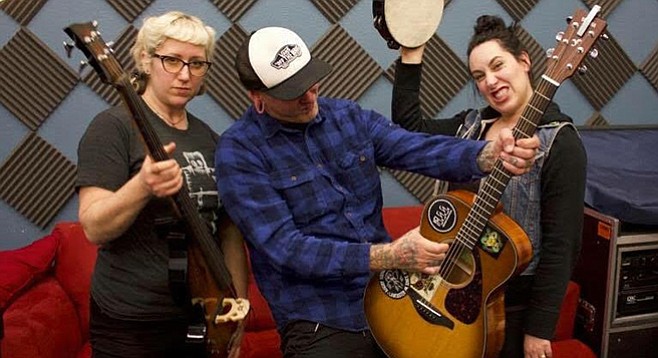 “Kelley and I lived in San Francisco for a year and a half,” says Scotty Bones, who moved to San Diego in 2011. “We were super homeless and super drug-addicted.... Kelley and I mostly liked to shoot meth and heroin. Amanda was a drinker.... 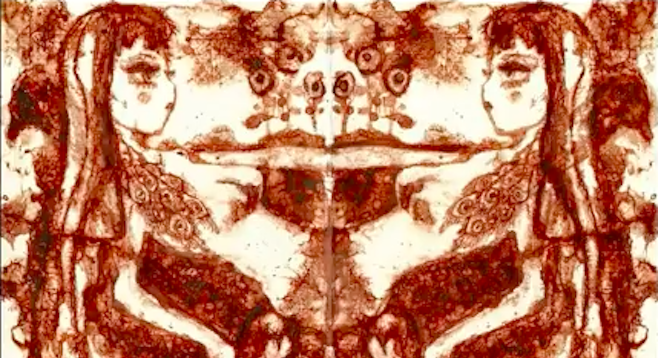 “I was a body piercer for six or seven years. I was using so much that I decided to stop paying bills and do drugs full time…. I hocked my guitar multiple times. I stole a lot of bicycles back then. It’s really not a super proud thing I did. I was looking at a prison term. They said either spend seven years here or go to rehab. A friend of mine who lived down here helped me find out about the Alpha Project and its men’s live-in facility called Casa Raphael. I spent a year there getting clean.”

“She got clean when I did,” says Scotty. “But then we didn’t speak to each other for, like, two years.” Scotty married Amanda Bones, who plays percussion and does backup vocals. Now all three play together, and the women, he says, “are like family.”

“A lot of our songs are about drugs and death and dereliction. ‘Blue on the Bathroom Floor’ is about Philip Seymour Hoffman. He was a big inspiration for us. His death [in 2014] really hit home about how real addiction really is....

“A lot of the music we play now I wrote when I was homeless. ‘Horse Faced Pirate’ is about someone who doesn’t know how to take care of themselves, like getting the basic things in life....‘Cheese Sandwich’ is about when Kelley and I were living in the back of a U-Haul and all we had to eat was cheese and bread we stole from the store....

“Most people can’t relate to the homeless.... You just can’t sweep a human being under a rug and expect them to go away or buy them bus tickets to other cities. They’re still people.”

Blind Mountain Holler appears Tuesday, August 8, at the Merrow with the Shane Hall Trio and the Shane Shipley Band.