"It's a little less than 300 square feet. We had to be a little imaginative." 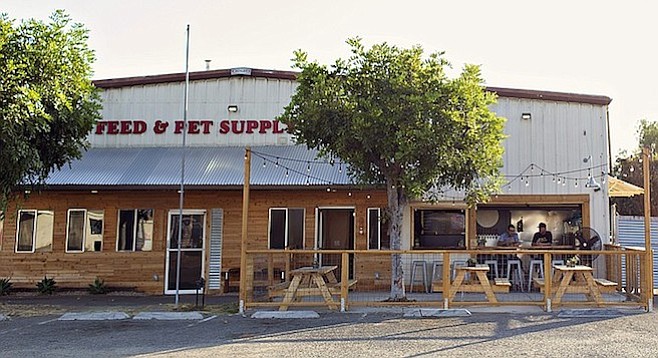 A 14-year homebrewer, Ketchen Smith has long dreamed of leaving his job in the medical device industry to start a brewery. "I wanted to go 15-barrel," he says, "and retire to brewing."

Doing so would probably have required selling his Escondido home and potentially moving his young family to compete in a less saturated beer market. His wife, a fourth-generation Escondidan, had another idea: start small and see if the brewery pans out. So they started very small, brewing out of unused space in a friend's feed-and-pet-supply shop.

That friend, Evan Smith (no relation), owns Escondido Feed & Pet Supply, which has been in his family nearly 40 years, and had a small corner of office space going unused. "For years," Evan says, "I've been thinking about all kinds of crazy ideas that I can do in this space."

Ketchen came to him with the brewery idea, and the two Smith families partnered to open Escondido Brewing Company, which opened to the public July 7th. In doing so, they barely managed to fit a cold box, taproom, and tiny 1.5-barrel brewhouse in the 300-square-foot space. "It's a little less than 300 square feet," Ketchen clarifies. "We had to be a little imaginative."

The taproom bar faces out, meaning customers actually drink outdoors, in a dedicated beer garden. Inside, the brewery's small fermenters sit inside the type of glass display cooler that keeps beer cold in a convenience store. A modest water-filtration system sits on the outside of the building to save space. "To me, this is a very awesome version of my garage," Ketchen jokes.

Aside from plumbing, the brewery partners built everything themselves. They also work the bar. "It's cool to meet all our customers and tell them our story," says Evan. "They can ask questions, they can talk to Ketchen…people dig that."

Since both men work day-jobs, the brewery opens only Friday and Saturday. Sunday is brew day, when they produce homebrew recipes that earned Ketchen 18 awards over the past several years.

Escondido Brewing's beers include Hidden City pale ale, which previously won a Coachella Valley Brewing Co. homebrewers contest; and Marshall Nose, which garnered second place in a field of 426 in the American IPA category at this year's National Homebrew Competition. That beer is part of the brewery's Hop Animal series, where recipes and different hop bills will see the IPA change and evolve throughout the year.

Even open just two days a week, the nanobrewery already finds itself selling beer at a rate almost too fast to keep up with on its small system, giving Ketchen reason to start dreaming about a 15-barrel future once again. As he pours a small taster of his nearly sold-out supply of Grape Day, an IPA featuring Nelson hops and muscat grapes, he says, "I think we're already seeing signs that we need to go bigger."