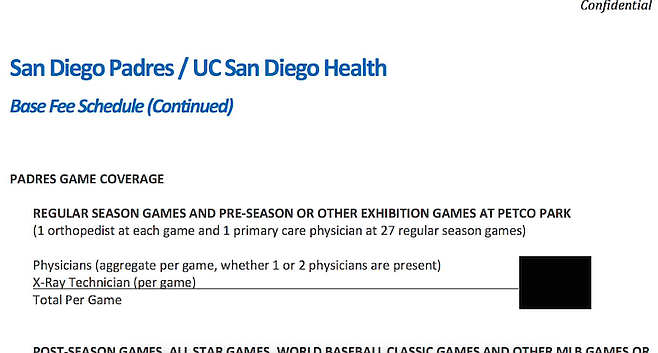 The San Diego Padres, perennial laggards on the playing field, are getting millions of dollars in cash and a secretive deal for discounted medical care from UCSD as part of a costly endorsement and promotional arrangement agreed to earlier this year between the professional baseball team and the powerful California state-run La Jolla university’s healthcare complex.

Heavily redacted documents released this week after two months of delay following a request for the material under provisions of the state's public records act show that UCSD has agreed to pay the Padres - identified as San Diego Ballpark Funding, LLC - $1 million in 2017, $1,050,000 in 2018, and $1,102,500 in 2019, with equal installments payable April 1 and June 1 of each year.

In return, the university division known as UCSD Health that runs the school's medical center and physician group have been designated an official team sponsor, with rights and appurtenances including an "Upper Right Field Iconic Sign," an "Outfield Wall Sign," an "Upper Deck Fascia Fixed Sign," along with regular "takeovers" of the so-called light emitting diode-illuminated ribbons encircling the interior of the team's Petco Park, according to a January 12 contract.

"Sponsor will be entitled to refer to itself in printed, broadcast, digital, internet and display media and communications (including, without limitation, in connection with marketing and advertising, public relations and community outreach activities and events) as the 'Official Health Care Provider of the San Diego Padres' and the 'Official Sports Medicine Provider of the San Diego Padres,'"

In addition to the $3.1 million in up-front expenses, there are concealed costs to the university in the form of discounted medical care provided under a separate Medical Services Agreement between Padres L.P. and the University of California, extending from January 2017 through the end of 2019.

Among other services, the deal calls for UC Health to provide pre and post-season physical exams for both players and coaches of the team and its minor league affiliate, the Lake Elsinore Storm. In addition, "UCSD will provide an orthopedic doctor to provide general medical coverage for each day of Spring Training" in Arizona and the team’s Dominican Republic training camp.

"UCSD will provide a team of doctors, the exact makeup of which team will be determined by mutual agreement of the Padres and UCSD, for a trip to the Padres’ facility in the Dominican Republic to perform physicals for minor league players, meet with local doctors used by the Padres and assess the medical care available at the Padres’ Dominican complex.”

Adds the agreement, “The parties anticipate that at least two orthopedists and two primary care or sports medicine physicians will be on site at the Padres’ facility in the Dominican Republic for a period of two consecutive days during this trip."

During the regular season, a UCSD doctor "will arrive at least one hour prior to the scheduled start of the Padres Game and will remain until all immediate medical and treatment needs are attended to following the conclusion of the Padres Game. In addition, UCSD will provide one primary care or sports medicine doctor for 27 regular season Padres Games in each year of the Term on a schedule to be determined by mutual agreement of the Padres and UCSD.”

Medical services are not limited to athletes. "Game coverage will include as-needed medical services for Padres players, visiting players and staff, umpires, Padres front office executives and staff and, as may be reasonably requested and as time and capacity permit, player/staff immediate families."

Other services to be provided by the university include "Medical review of amateur draft candidates, including grading of player risk," and a "care coordinator/navigator to assist Padres staff and players with navigating all appointments, logistics and questions related to UCSD’s provision of the Medical Services.”

“We ultimately chose UC San Diego Health because of their pioneering work in research to help prevent injury and re-injury," Padres General Manager A.J. Preller said in a news release quoted by the Union-Tribune February 7. The paper reported the team's contract with Scripps Clinic had expired at the end of 2016 and was not renewed.

How much of a bargain the baseball team is getting from UCSD for its medical coverage remains a deeply held secret, as monetary terms of the arrangement, including the amounts of discounts listed for Padres employees, have been excised from the documents released by the university.

Whether or not the university is on firm legal ground in withholding the data remains to be seen; documents revealed thus far show that the Padres and their employees are getting a better deal at UCSD than the average taxpayer.

Says the contract released by school officials, "For each person identified by the Padres for participation in the UCSD Executive Health and Wellness (“EHW”) Program, UCSD shall discount by [redacted] the annual fee customarily charged by UCSD to the public for participation in such program. For 2017, the annual fee charged by UCSD for the EHW “Gold Package” is $2,500, resulting in a fee to the Padres for each designated participant of [redacted]."

Amounts to be charged the team by the university for administrative fees, Dominican Republic and other out-of-town trips, optometry, orthopedists, spring training and game coverage, employee coverage, June draft medical reviews, physical examinations, out-of-town surgery, and related services have also been withheld by the university.

Yeah, but just think how cool it is to be the Doc who gets to care for all those sport celebrities. You know the current ones and the "has beens" who now work in the Padres front / back office. And visiting team players too.

No wonder these documents are heavily redacted. I'm surprised you even got them to acknowledge the public record request! I'm just wondering how many "oh shit, what and how are we going to respond to this" statements were uttered during the delay in getting the nearly useless info to you. I'm also wondering just how high the answer went up the food chain? Maybe all the way to the Chancellor's office? I'm also wondering what other quidpro quos were consumated in this bargain that you haven't discovered.

Outrageous. Absolutely outrageous. The arrogance on the part of both institution. Here's hoping you can force more detailed information out of the University. The public's right to know is greater than the University's wish to hide the facts. All the doctors on site - at games and out of the country in the Dominican Republic - is astonishing. I wonder: do they get a special box with free game tickets? I wouldn't be surprised.

It's a cool deal, no doubt. But I'm curious to know what the numbers were under the old Scripps Clinic arrangements -- the UCSD Gold Package of $2500 mas o menos per player is a lot less than what Scripps Clinic charges one person for concierge coverage through its private internal medicine center.