The very worst kind of NIMBYism? 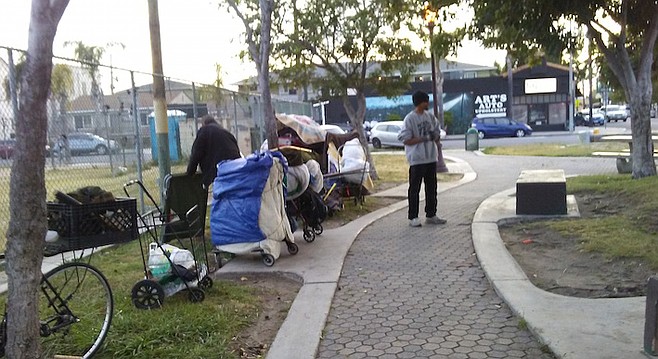 The Adams Avenue Recreation Council voted Tuesday night to take action seeking curfews at two parks that will allow the police to roust the homeless who are camping there.

"Who wants to bring their children when these people are always there - they live there." Juan Ortiz declared. "They are not homeless, they are transients. They go from neighborhood to neighborhood robbing and stealing."

Normal Heights seems to be experiencing a surge in the number and visibility of homeless people, especially with a campground appearing and disappearing at the south end of Ward Canyon Park and in the parklet on the south side of Adams in the thin swath of land at the northern edge of the ball fields just east of Mansfield St. Neighborhood chatter online ranges from indignation over the sad and terrible appearances and behavior to concern over crime. Others take the there-but-for-grace-and-luck-go-I view, and wonder what is to be gained by adding misery to the lives of people who already aren't doing well at all.

Dave Rodger, the rec council chairman explained that a deputy district attorney and a member of the San Diego police department Homeless Outreach Team had discussed the neighborhood's options at an earlier meeting. Rodger came away understanding that the curfew would be a tool the police could use to create a record of problems, to push services and to clear the parks.

"They're moving them from here to there to downtown where they can get services," Rodger said. "I think the parks are made for kids and recreation. I don't think they were ever intended for living in."

The small group struggled for consensus, at one point with people declaring how close to the park and its problems they live.

"I have five people on my block who won't let their kids go past these people to get to school," said Matthew Bandy . "We're choicing out of Adams and going over to Alice Birney or North Park for school."

Rodger encouraged people to call the homeless outreach team. He explained that the police officers don't make arrests, but rather try to connect homeless people to services. "Only six or seven percent accept services, he said, adding that 63 percent are habitually homeless.

He encouraged people to call the non-emergency police line and report incidents and sightings.

"You probably won't get them to send a cop and they don't write reports, but it creates a record so when a judge looks at the number of calls, he can show there's a problem and just put them in jail without having to offer them services," Rodger said.

Neighbor Harry Mort had concerns about some of the proposed actions to irritate the homeless.

"I heard you are trying to take the benches out of the park," Mort said. "That's wrong."

The board voted to pursue establishing a curfew for the two public spaces - an effort that will take adding it to the Municipal Code.

"This is the very worst kind of NIMBYism," Mort said afterward. "These are people with nowhere to go."