The gulf between San Diego and Austin hipsters yawns deep

On the odium toward sellouts 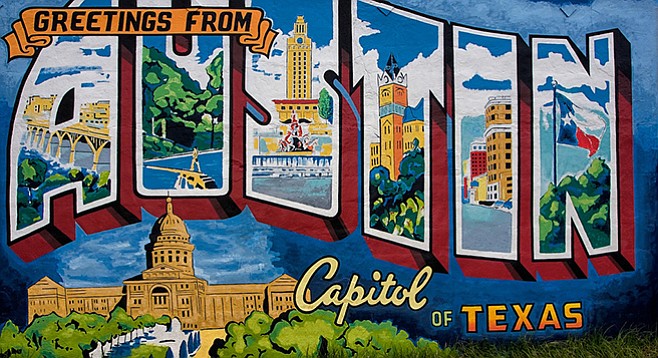 Okay. How about the difference between San Diego hipsters and hipsters from, say, Austin, Texas?

To the uneducated eye, a local hipster may be indistinguishable from a far-flung Texan cool kid. But, rest assured, while the gulf between them may be narrow and require a keen mind to elucidate, that gulf yawns deep.

The Austin hipster used to live in California, before it got too expensive to make ends meet on a craft mixologist/ironic gangsta rap ukulele singer’s salary. She’s keeping Austin weird, and she’ll remind you that, even though she only moved there in 2015, Austin was being kept weird before Portland proclaimed its intentions to keep itself weird. She always used to roll her eyes at the ultra-carnivorous hipster restaurants serving meat on meat with a side of meat, but these days she’s developed a taste for brisket as a means of connecting with the spiritual heart of her new home. Wearing Wranglers and cowboy boots makes her feel oddly, uncomfortably, and unexpectedly Republican.

The San Diego hipster actually just moved here last year, from Houston, to leave behind the shitkicking ways of his oil-rich brethren and country-music fans. He heard that L.A. was played out and full of wannabe movie stars, so he came to SD because it’s “more chill.” Although he never went in for ’cue back in Texas, the SD hipster’s Lone Star roots lend him enormous credibility as a born authority on smoked meats. He never fails to leverage that clout when meeting groups of friends for ribs, which he now enjoys. He gets to wear his cowboy hat every year at Coachella...ironically, or genuinely, who can tell and who cares!?

Why exactly do hipsters so resent a “sellout”? What’s so wrong with success? Isn’t this America?

I feel like this relates to the issue of “how to spot a poseur.” Any sellout who doesn’t acknowledge his sellout nature must surely fit the bill as poseur du jour.

The dark heart of the matter is that cool stuff doesn’t pay, and when some enterprising soul inevitably turns what’s cool into what’s profitable, such capitalization drains the formerly cool activity of its coolness faster than a tweaker with a Big Gulp at the end of a four-day bender. Taking something cool and exclusive, then popularizing it among the masses, that takes all the fun out of being into something that others aren’t cool enough for.

By way of example, craft beer was a lot more enjoyable back when people still called it “microbrew” and Johnny Fratbro still regarded non-mainstream beers with deep suspicion, perhaps overlaid by an inch of dread and salted with the embarrassment at his own lack of knowledge. These days, when my teenage cousin from East Butthurt, MO, can use the phrase “highly sessionable IPA” with unbridled earnestness, I feel like the bartender is going to get me wrong, perhaps even judge me harshly, if I order an Arrogant Bastard. Where’s the fun in that?