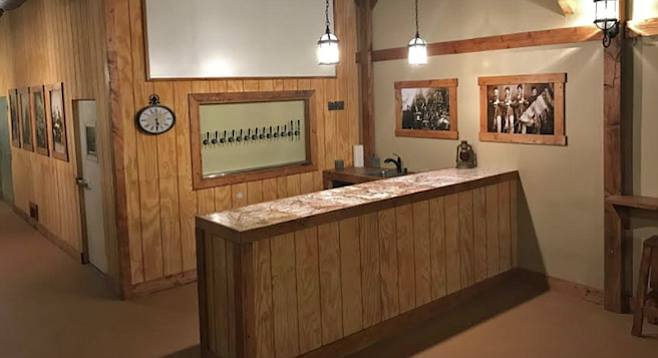 Brewer Mike Nelson is starting the small company with longtime girlfriend Natallie Phillips. The San Diego natives both grew up on the coast but moved to Ramona about 20 years ago.

"We moved up here to get away from the city, and we just love it," says Phillips. "The country is awesome."

While Nelson originally picked up homebrewing in the late ‘90s, he started making beer consistently about ten years ago. During that time he's entered a number local homebrew contests and done pretty well. "I can honestly say," Nelson adds, "I've only not won awards three times, out of a hundred-plus beers."

While he recently lost a number of those recipes to a computer malfunction, the water utility worker by trade has several of his favorites locked down, including his preferred IPAs and stouts. "I brew to style pretty much," he says, "other than the specialty beers." Those include a kumquat wheat ale and an extract-free smoked peanut butter beer, and a pumpkin saison in the fall.

For Smoking Cannon, Nelson built his own three-barrel system, and both he and Phillips contend they would like to see the brewery remain a relatively small, mom-and-pop shop, with the focus on making good beer. "Once it gets big it's not special," says Phillips. "This is about the passion, not the money"

Family contributions include advice from Nelson's nephew, a brewer at Green Flash, and his brother, who owns a woodworking business and helped the couple build furniture and add wood trim to the tasting room. The 1800-square-foot space was made to resemble a 19th-century saloon and is decorated with Civil War photos. That time in history also inspired the name of the brewery.

"One of my other hobbies is making scale-model cannons," explains Nelson. "I've always liked Civil War stuff." He's naming each of his beers after a different large ordnance.

“There's probably 75 different makes of cannons," he says, including names like Parrott Rifle, Rodman Gun, and the squat, high-caliber mortar dubbed “the dictator.” He hasn't yet matched up cannons with beers but aims to follow the premise, "The bigger the cannon, the bigger the beer.” So, an imperial stout will most likely be named “the Dictator.”