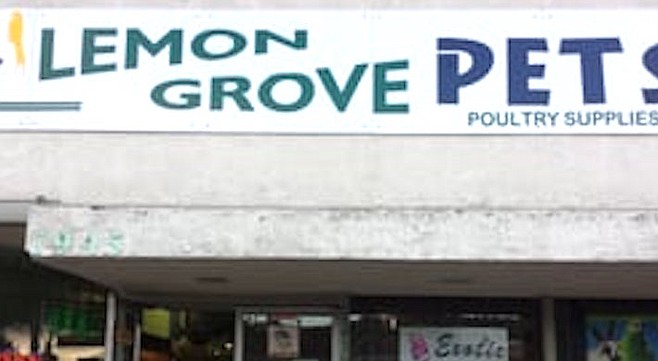 Complaints about Lemon Grove Pets have piled up over the years. Online reviews describe crowded cages, empty bowls, and odors. The store, which sells fish, birds, cats, rabbits and other small pets and animal supplies, has been in business since 1989.

On April 18, animal advocate Lani Stacks spoke to the Lemon Grove city council about it for the second time this month. “I just get awfully frustrated with these three minutes,” she said, comparing the slice of time for public comments to her huge concerns about the "horrible dungeon" at 7945 Broadway. So, she keeps coming back.

As she sees it, nothing ever changes.

Eight cities in San Diego, with a push from local animal welfare groups, have banned the retail sale of dogs and cats from commercial breeding operations. Last summer, National City, with its four pet stores, voted down a ban while Solana Beach followed the lead of the city of San Diego, which passed the strictest law in 2013, requiring pet retailers to source their cats, dogs, and rabbits from city or county animal shelters, humane societies and nonprofit rescue groups.

Now, state legislators are considering a bill that would require all pet stores in California to do the same. It too, applies to dogs, cats and rabbits.

In fact, county shelters have their hands full with a range of homeless pets looking for love; adoptable pigeons and pythons, rabbits, turtles, lizards, chickens, ducks, guinea pigs, and more. San Diego even has a rabbit rescue.

To Stacks, bunnies are puppies, too. So are the fish and birds that might not be as cuddly, but are all “sentient beings,” just like the cats and other furry creatures at the store on Broadway. And they are held captive in miserable conditions, she told the council, urging them to enact an ordinance, as 33 cities in California have done.

“There are animals that are suffering, and just because they're sitting on a perch doing nothing doesn't mean they’re O.K.”

But are the animals sold at Lemon Grove Pets being mistreated?

Not according to state and local laws, officials say.

Miranda Evans, who manages Lemon Grove’s animal control contract, says that the City Council and Animal Control have followed up with complaints and concerns related to Lemon Grove Pets, a business owned by Roland Baloy. The most recent visit by Animal Control was a surprise inspection on March 3, 2017, she says in an email. “No violations of the penal or municipal code were found.”

Stacks, who had been advised of the results, applied the penalty of perjury clause to the truthfulness of her statements at the meeting, “to protect my integrity of what my eyes, my ears and nose” and others who share her experiences have witnessed. She told the council that after the inspection, someone who visited the store “not once but twice” in March, informed her that they had spotted a large, dead fish. “A second trip produced witnessing a dead rabbit,” she said.

Since July 2008, the Humane Society has received 27 complaints about the store, according to Captain Mel Jones, Humane Law Enforcement officer for San Diego Humane Society.

None have resulted in citations. “Some minor issues were noted, which the owner dealt with immediately. A judge would require that we give the owner a chance to address the problem prior to issuing a citation.”

One common complaint about pet stores is cage size. In general, animal welfare laws require cages to provide just enough space for an animal to easily turn around, stand, stretch wings, sit and lie in a comfortable position. Lemon Grove’s code also states that enclosures should be big enough so that the animals “can obtain adequate exercise.”

The pet industry defends cramped quarters as temporary housing, assuming the animals will be sold before they’ve had to endure the confines for long. But buyers often pass up unhealthy looking animals, meaning those that don’t thrive in a pet store aren’t going anywhere. As Jones advises anyone bringing home a pet, “be sure he doesn’t look ill, depressed or lethargic.”

For those who witness neglect or cruelty, Jones suggests reporting it by calling their Humane Law Enforcement Department or through the website. Going undercover with a camera isn’t their recommended strategy. And what looks cruel may be legal. According to Jones, current laws are simply inadequate to protect animals.