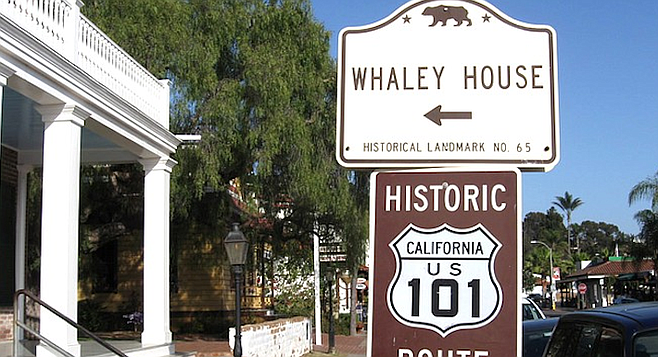 The last stop for Dave Potter, before ordering historic Highway 101 signage to put up along Morena Boulevard, was to get one last final thumbs-up from the Clairemont community planning group on April 18. 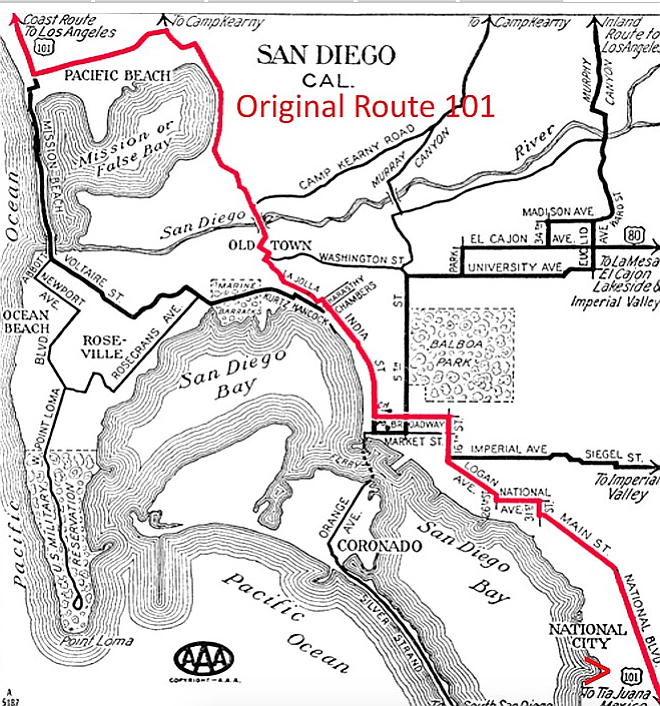 Original 101 in 1926. Potter confirmed that Morena Boulevard, between Taylor Street and Balboa Avenue/Garnet Avenue, was part of the original Route 101.

Potter, a Bay Park resident and urban planner with decades of experience, has been working on this for a while. He had first mentioned it to me back in March 2016 right after he got the green light from the city to install neighborhood signs in Bay Park.

Potter, far left, holding 101 sign: Anyone who wanted sign could probably find one on eBay for about $90.

Potter has put a lot of time into this. He did the research that confirmed that Morena Boulevard, between Taylor Street and Balboa Avenue/Garnet Avenue, was part of the original Route 101. He coordinated with District 2 staff, got clearance from the city, and secured funding. 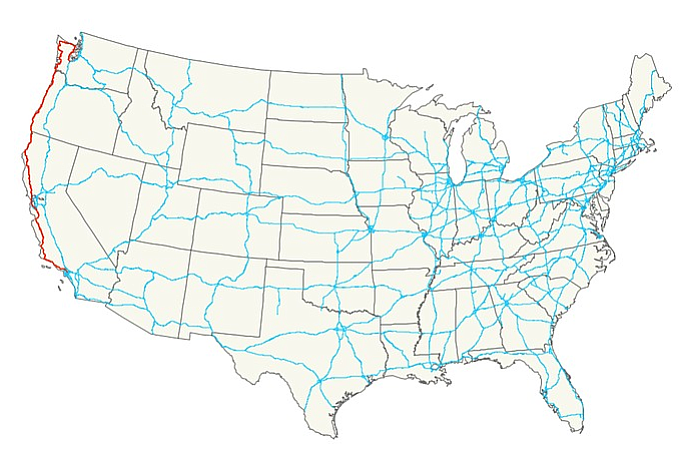 101 was first commissioned in 1926 as a highway starting at the Mexican border and ending at Olympia, Washington.

According to Potter, the Clairemont town council is paying $361.61 for four of the signs and the Linda Vista town council along with the Morena Business Association is picking up the tab for the other four. The total project cost is $723.22. The city has agreed to install the signs at no additional cost. 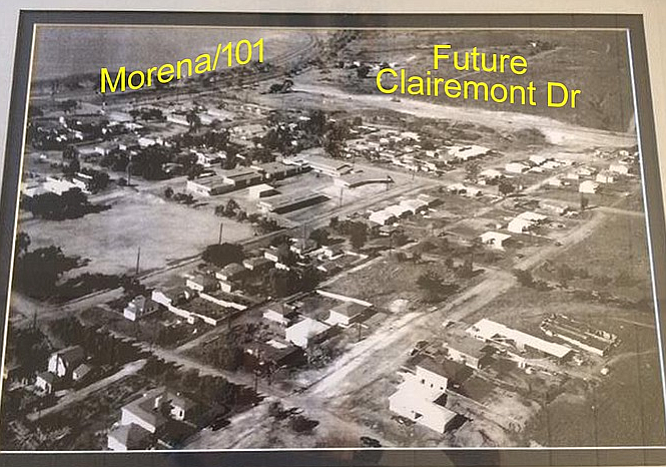 Bay Park before I-5. One Clairemont resident: “Morena was not a part of old 101. I-5 was built over where 101 was. As an early teen we used to run across the 101 or crawl under it to go fishing at Mission Bay where the Hilton is now.”

“Route 101 is one of the original U.S. highways,” said Potter. “It’s one of the last remaining highways as well as being the longest U.S. route still active in California. It was first commissioned in 1926 as a highway starting at the Mexican border and ending at Olympia, Washington. At some point though, the 101 was truncated in Los Angeles when I-5 took over the route in San Diego.” After the I-5 was completed in the mid-1960s, Highway 101 was mostly defunct in San Diego circa 1970. 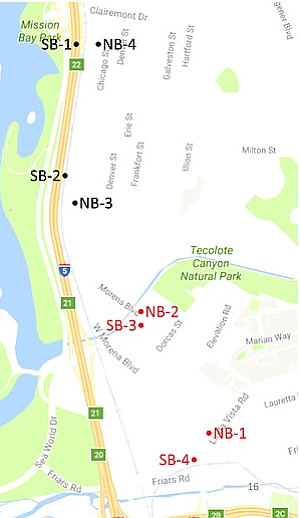 Eight signs will be installed along Morena Boulevard in Bay Park and in Linda Vista.

Potter said that Route 101 was one of the original national routes. It was designated in 1926 by the American Association of the State Highway officials. “Existing roads and streets were selected to create connecting highways. In most cases, they didn’t improve the streets when they did this. East/west routes were even-numbered, while north/south routes were odd-numbered. The reason for this was really to encourage travel.”

According to a California Highways Journal from 1924, “The building of the state highway system in California had its inception in 1910 when the first highway act was approved by the people.” It was at this time that a state highway commission of three members was created.

Potter pointed to several places in San Diego that have already posted Historic Highway 101 signs such as in Old Town in front of the Whaley House. Solana Beach and Oceanside have them too. Potter commented that they seem to be far more popular in the northern area of the county.

So where exactly was Highway 101 located between Old Town and Del Mar? Potter said, “There was a time before any of us existed when 101 and Pacific Highway wasn’t there. The research showed that the original 101 route went from Old Town up to Morena Boulevard and passed over into Pacific Beach and then up to La Jolla.”

Potter pointed to 1998 when the California state assembly adopted a resolution recognizing the historical importance of Route 101 and how it played a major part in developing California. The resolution also pointed out that this wasn’t just a highway route as we think of them now, it was "main street" to many cities and towns. The resolution asked for historic highway markers to be consistent throughout the state.

Richard Jensen from the planning group wanted to add a motion to include historic 101 signs in residential areas. Potter said he would be more than happy to help shepherd that along if funding could be found, but for now he wanted to move forward with the eight signs the city had already approved. He didn’t foresee any trouble getting something like that approved in the future though.

Someone in the planning group asked if Potter was going to raffle off the Historic Highway 101 sign he was holding during his presentation. Potter said he was keeping it, but if anyone wanted one they could probably find one on eBay for about $90. Potter said the sign he was holding is smaller than the 2-foot by 3-foot signs that will be installed along Morena. He said they will be very similar to the historic Route 80 and Route 395 signs that one might see along El Cajon Boulevard.

When it came time for the planning group to vote, they were unanimously in favor. This was followed by applause from the audience. After his presentation, several people walked up to Potter to congratulate and thank him. Councilmember Lorie Zapf wants to thank Potter for leading the effort and is looking forward to the dedication ceremony. She said, “This is very exciting to see this vision become a reality.”

Ryan Trabuco, formerly the president of the Clairemont Town Council (he recently moved on to work with California state senator Toni Atkins), said the town council was happy to help Potter make this happen. “Not many people remember Morena Boulevard as Highway 101, but this was a way to help celebrate that history and legacy.”

This is true as some dispute Morena as ever having been a part of Highway 101. One Clairemont resident commented, “Morena was not a part of old 101. I-5 was built over where [the] 101 was. I remember quite a lot about the 101. As an early teen we used to run across the 101 or crawl under it to go fishing at Mission Bay where the Hilton is now.”

Potter reflected that old-timers fondly remember Pacific Highway, but this resident like many others are not old enough to remember Morena Boulevard prior to 1933.

Potter has ordered the signs and will be coordinating with the city to install them and with Councilmember Zapf’s office to schedule a dedication ceremony. He said the signs take about ten days to arrive after ordering.

One Bay Park resident had this to say, “Nostalgia reigns large. Whenever I see those historic 101 signs up north, it makes me think of a simpler time, before the congestion we all think of when hopping onto a freeway now. There was a time when people took joy rides up the 101. People still do, of course, as they head north to take the old scenic route.”

Perhaps not the original route, but Morena Blvd clearly was the highway replaced by I-5. Four lanes, center divide, off ramps onto Balboa, design of the bridges. This section has all road standards of a 40s - 50s Calif. highway replaced by the interstates. Great job Dave Potter.

Great job, Dave. I'm glad the Linda Vista Town Council and the Morena Business Association were able to contribute to get two of the signs made and posted.