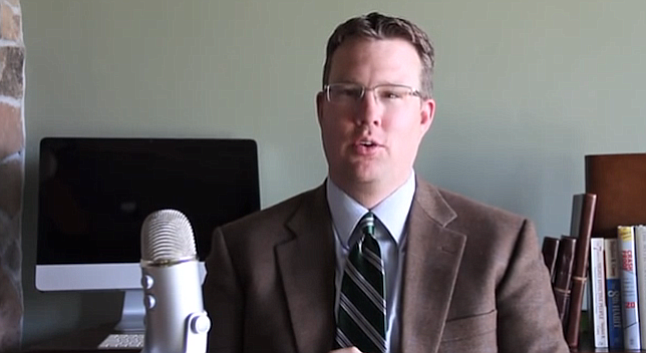 The Securities and Exchange Commission three years ago charged him and his firm, Total Wealth Management, with fraud. The agency said he got kickbacks for touting stocks without divulging the ruse to his clients. Some of his ill-gotten gains went into a Washington City, Utah gun shop called Dixie Gun Worx, according to the San Diego law firm of Aguirre & Severson, one of the firms that has filed suit against Cooper and his firm.

He was arrested on a warrant from Superior Court in San Diego, issued by the San Diego District Attorney's office, according to paperwork accompanying his arrest. Among the charges are securities fraud, misrepresentation on sale of a security, and theft from an elder.

According to Tom Harvey of The Salt Lake Tribune, writing two years ago, "A number of alleged victims in the San Diego area are members of The Church of Jesus Christ of Latter-day Saints. On a Total Wealth web page, Cooper touts his two-year Mormon mission in New England and boasts that he is an Eagle Scout."

The Reader pointed out in August of 2014 that he touted his participation in "Boy Scouts, Marine Corps, Mormon Church," and boasted of his investment savvy on his KOGO radio program.

According to the arrest papers, Cooper is "currently incarcerated in the Purgatory Correctional Facility in Hurricane, Utah," which is the main jail in Washington County.

Says Gloria Templin of Bonita, one of the victims, "I lost $263,000 — my entire retirement savings. The majority of us [victims] were seniors." She originally went to Cooper after listening to his radio broadcasts. She and her fellow victims "feel like the biggest fools on the planet."

This kind of thing is why we need to have a social security system. While the government my not always be the best they are secure. If, as the Republicans want, us to manage our own retirement few would be able to do so the rest would be bilked out of every dime. Conservatives think that the worker should save for retirement and health care but it is impossible to save the kind of money to do either let alone both.

AlexClarke: There are several lessons to be learned from this tragedy. One: be wary of radio talk show hosts claiming to be experts. Most are not; Two: be wary of any financial advisor boasting of his or her piety or community spirit. That's a classic con artists' trick. If a financial meeting starts with a prayer, walk out; Three: Don't ever give all your money to one advisor. Diversify; Four: Never give money to the advisor. The understanding should be that the money is kept in a financial institution, not kept by the advisor. The advisor may tell the bank to buy or sell a security, but the money stays with the bank.

People apparently invested with the idea that Cooper's portfolio was conservative. But if he was getting kickbacks from the companies whose stock he was touting, his stock selections could NOT have been conservative. Blue chips like General Electric do NOT pay stock touts to promote their stocks. In fact, ONLY small, insignificant -- almost always crooked -- companies pay a radio person or a financial advisor to tout their stocks. Of course, Cooper's victims didn't know he was getting kickbacks.

Would it be possible to ask KOGO, or any of the many other stations, if it has taken steps to insure that their financial guru programs are legit? I've listened to so many of them for many years on weekends, and they all seem to sound about the same. Milquetoast is the word I'd use to describe most of them. Apparently I missed out on the best of them, including Total Wealth Management, and never wanted to employ them.

BTW, I do use a financial management firm for some of our holdings, but I still self-manage even more of it. That firm charges plenty, whereas my cost is nil. The danger is if I become demented, make bad moves, and nobody sees it until the damage is done. But if that happens, I'll never know it happened, so why worry?

Visduh: Most if not substantially all of the local financial talk show hosts on radio these days pay the station to be on air. Nationally syndicated shows don't fall in that category. The stations must think they are in the clear legally or there wouldn't be such arrangements.

As Maria Severson of Aguirre and Severson says, there is no money left in the Cooper scam. Is it possible to sue the radio station? Somebody might try it.

I have my money with a large brokerage, but I call the buy and sell moves. I use research from the firm and other sources. Best, Don Bauder

I thought your money was in Berkshire Hathaway shares?!

Your post raised another matter and that was Cooper claiming to be an Eagle Scout and presumably a Marine. If he was a member of the LDS church, he might well have been an Eagle Scout, since that church makes Boy Scouting a big part of its program for youth. But, a Marine? I wonder. Plenty of people like to claim to be veterans of one sort or another when they are not. We've had some really egregious examples of that over the years. But I'd guess that if he was a phony in one way, he might have been a phony in many other ways, such as making bogus claims of prior accomplishments.

Visduh: Right you are. Pretendilng to be a Marine sells very well in San Diego, obviously.

There is no question that he touted his Mormon faith. I don't know why he wasn't also charged with an affinity scam. Mormons trust other Mormons, and there are lots of examples of scams against people of that faith. Also, Utah is a wide open state. There is little effective state regulation, so crooks abound. Federal agencies have offices there, but don't seem to push as hard as they do in other states.

Mike Murphy: Yes, that is an excellent question. If a financial advisor/huckster thinks he has all the secrets of investing, why doesn't he keep quiet and generate a huge fortune privately? The answer is that the huckster makes his money selling advice, not investing. Such con men also make bundles writing get-rich-quick books.

Long ago I did a story about a Washington state outfit that was putting on financial seminars around the country. But the company was publicly-held, and had to file with the SEC. The filings showed that the company had a fund that was following its own advice. It was losing money.

I also did a story about a Rancho Santa Fe guy who had written best sellers on how to make a bundle in real estate. I found he was in Chapter 7 bankruptcy and wrote a column on it. Best, Don Bauder

a bit like knowing there is gold in you own back yard, but telling everyone about it and not digging it up yourself

Jacob Cooper now deals in another kind of fiction... science fiction. His works are available on Amazon. The bio on his website says:

"Aside from writing, Jacob is an accomplished percussionist, pianist, and composer. He enjoys power sports on land and water, as well as spending time with his family." 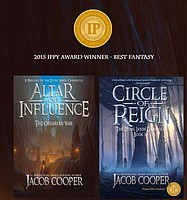 Ponzi: Are you sure this is the same Jacob Cooper. In doing research, I discovered there was another one. Best, Don Bauder

I am certain. The upper-left photo is a picture of him taken in jail, the upper-right photo is Jacob accepting an IPPY Award for one of his books. The bottom photo is Jacob in his home office, please compare the microphone on his desk and the microphone in your stories photo. Look up the website domain address (circleofreign.com) in ICANN WhoIs and Jacob Cooper of Total Wealth Management, LLC is the registrant. Giving an address of 8880 Rio San Diego Dr., San Diego California and an email address of: ja[email protected] 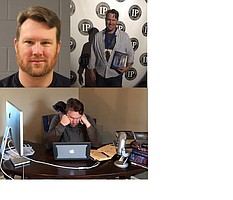 Ponzi: I will take your word for it. Best, Don Bauder

I wonder if he will get to keep his 7,200 sq. ft. home and houseboat? For a million dollars you can buy quite a house in small cities in Utah.

Ponzi: Yes, he had a million dollar home in Washington City. I don't know if he will get to keep it. A surprising number of villains do keep their fancy homes.He did plead penury to the SEC. His wife started a similar operation, but it is now defunct, according to Bloomberg. Best, Don Bauder

Christopher Carmichael: Yes, almost all radio financial "experts" pay to get on the air. The stations don't care if these people know a thing, as long as their check doesn't bounce. It's wise not to take any advice they give. Best, Don Bauder

The personality to whom he referred is Ric Edelman. I do hear him on weekends, and his advice is, to my mind, generally good. But you must realize that he doesn't tout investments on the air; he touts himself and his firm as investment advisors, and invites inquiries for "no cost" consultations. There are so many of those operations out there that they have to promote themselves somehow, and by paying to put a call-in program on the air, they can accomplish that. This is not to say that I'd recommend any of them who are on the air.

Visduh: Touting yourself and your firm on air is pretty tacky, too. You are smart not to recommend any of these on-air "experts." Best, Don

Don - just for the record, there is no "Washington City" in Utah. There is a Washington County (located in the extreme Southwest corner of Utah), which has a city named Washington in it. It is right next to St George, Utah - which is also in Washington County. The gun store is in St George.