San Diego homeless vets down, homeless in tents up 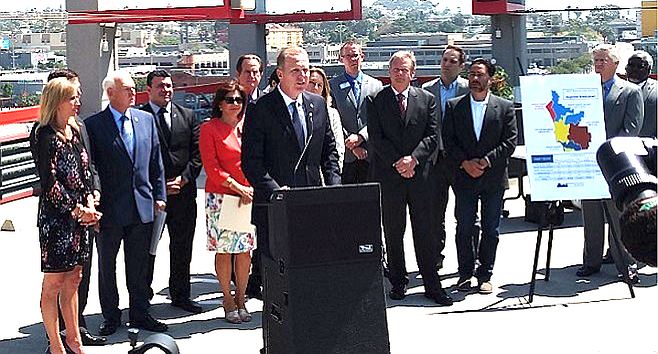 The number of homeless people on the streets of San Diego is on the rise, but fewer of them are finding their way into shelter beds. This, according to the latest numbers from the Regional Task Force on the Homeless, which on Thursday morning (April 20) released the results of its annual point-in-time account conducted in late January. 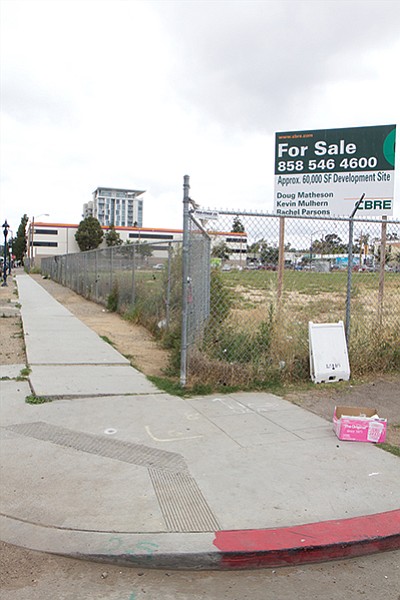 Homeless tents recently cleared out across the street from Pinnacle, which will soon be ready for occupancy.

According to the findings, there were 9116 homeless individuals in San Diego County as of January, up five percent from 2016. 3495 people were spending the night in a shelter at the time of the count (down six percent), while 5621 were on the streets overnight (up 14 percent). Of these 5619, significantly more than half, were living somewhere in the city of San Diego, though significant populations were also found in El Cajon, Escondido, National City, Oceanside, and Vista (each with over 200 in the count).

"This is affecting every part of the county, there isn't an area that doesn't have the homeless as an issue to deal with," said county supervisor Ron Roberts, who called the press conference along with city councilman Chris Ward. 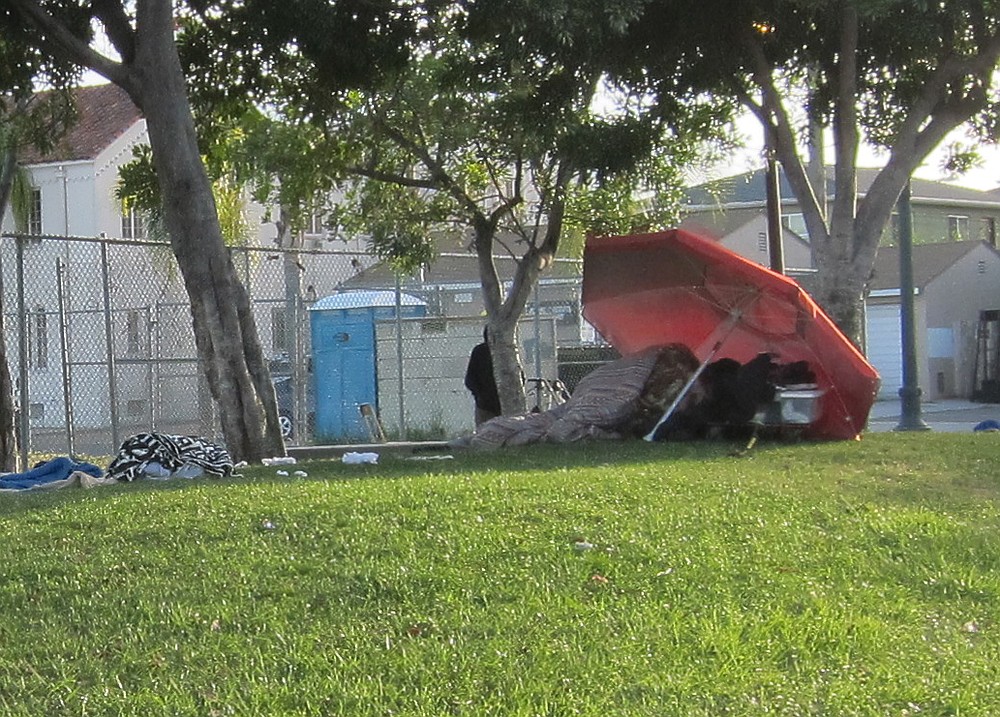 The count includes three parts, Roberts continued. The first two include counting individuals – on the street and inside shelters. The third is a questionnaire component in which 20 percent of those contacted agreed to participate. 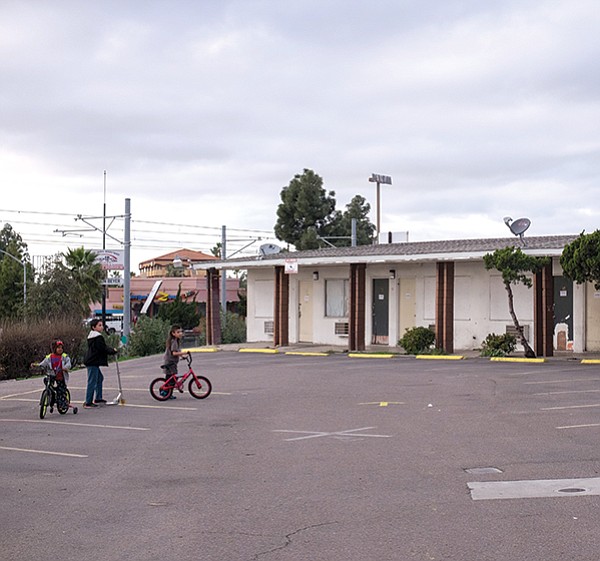 San Ysidro motel. The school surveys include those in motels or trailers, those abandoned by parents and staying with extended family members, and those in housing with more than one family.

Findings from that survey: 31 percent indicate chronic, or long-term homelessness. 39 percent self-identifed as suffering from mental health issues, and 20 percent admitted to substance abuse problems. Perhaps more relevant in a city where critics have said year-round good weather and abundant access to social services have caused the nation's homeless to flock to San Diego, 79 percent say they experienced homelessness for the first time while living in the county.

Dolores Diaz, executive director of the task force, shared a handful of statistics along with some of the methodology behind the study. To determine the total population, for example, assumptions that change on a yearly basis are made about the occupancy rates of vehicles and tents or other "hand-made structures." Use of tents and improvised shelters are up 58 percent over the last year.

"Even though we say that we have a five-year trend of a two percent decrease, homelessness is more visible because of tents and hand-built structures," Diaz admitted. "Veteran homeless went down by nine percent."

San Diego mayor Kevin Faulconer, joined by mayors from several other cities throughout the region, touted the success of initiatives targeting veterans, but a later comment suggested a crackdown may be coming: "The report shows that homeless individuals using their own personal tents is on the rise throughout the region, even though we have indoor shelters available. That's a problem that we cannot allow to continue."

"An area I have a big problem with is the definition of 'homeless.' The homeless count, I would say, doesn't include the majority of homeless families, because they hide." Criscenzo says. "They're settling for precarious housing, whether that's doubling up with another family, going back to or staying in an abusive situation, or agreeing to live in spare rooms of friends."

Criscenzo tells me about a family of seven, a single mother with six children, who she's been working for months to settle after the family faced an eviction last year. While they still don't have permanent housing, a family member has agreed to take them in, where the group shares a living room in what she describes as an already-cramped house as lodging.

"The moment they did that, they became housed so far as HUD is concerned," Criscenzo says. "They then immediately lost access to the services that could help them find permanent housing, even though the son-in-law at any time could reach the point where he's had his fill of having all these extra people in his living room and tell them to get out, leaving them to start all over again."

"The only way I can come up with some kind of estimate is to look at the schools. They were required to report on the numbers of housing-insecure students," Criscenzo continues. "So if a child is living in a situation that you wouldn't consider secure housing, doubling up or living part-time in a hotel, they'd report it. According to the numbers in 2014, there were 22,000 children throughout the county reported as homeless.

"This year's count says 29 percent of the homeless are women. Take their numbers and distribute them, and every woman would have to have like 70 kids in order for the findings to be accurate. So obviously the number of women and kids who are actually homeless are grossly underrepresented.

That "79 percent say they experienced homelessness for the first time while living in the county" point is really eye-opening. It's good that it refutes the 'snowbird migration' theory of homelessness, which assumes that those who can't afford shelter can afford to transport themselves and their belongings cross-country.

But more importantly, it shows that most people stay near where they were living before they became homeless. Which is why the bulldozed lots in the East Village that used to hold affordable places to live now have tent cities all around them.

Developers like to claim that any and all new building automatically creates affordable housing, in order to distract from how their destroying older housing stock in the process makes a bad problem even worse.

"More inhumanity (to man) has been done by man himself than any other of nature's causes."

"I didn't mean to be a songwriter; I just was writing for fun, you have all day to do it. I was homeless so that's all I had to do." --Jewel

The solution to homelessness is to 1. Remove the mentally ill and place them in institutions, 2. Train those who want to work, 3. Place into treatment programs those who want to get off drugs and alcohol, 4. Provide housing vouchers to all who are working, training or in treatment. The rest are bums and deserve nothing.

It would take money, more money than the taxpayers would be willing to spend. Yes, what few state run mental institutions are full. Jobs? There are jobs that require training to gain the skills. Education is a slow and painful process. Other than some political photo ops nothing will or can be done for the thousands of homeless. There is no political will.

The "will" seems to be now coming forcefully from the large downtown business interests. The millionaires that own major hotels, apartment buildings and condo developments have had quite enough of the homeless living on the streets, way too close to their properties. So they are putting the pressure on the pols to stop babbling for the cameras, and start putting real plans into action. Hopefully it will make a difference. But 3rd District Councilmember Chris Ward had better step it up. This is his bailiwick!