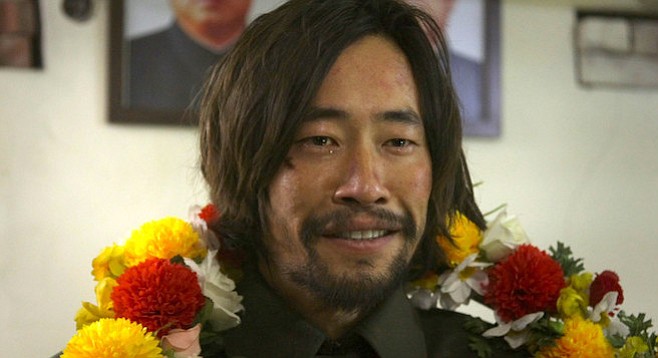 In spring, a San Diego cinephile’s fancy turns to the Asian cinema. With its 20 film schedule, this year’s San Diego Asian Film Festival’s Spring Showcase is the biggest in its seven-year history. The festival runs April 20-27 at UltraStar Hazard Center.

This year’s documentary-abundant lineup includes a pair of features with subjects ripped from today’s headlines. Easily the showcases’ biggest coup is the San Diego premiere of the latest from Steve James (Hoop Dreams, The Interrupters). As a result of the 2008 financial crisis, only one bank — a family business in New York’s Chinatown — saw criminal charges brought against it by the Feds. Abacus: Small Enough to Jail samples audio transcripts from the trial, news footage, and interviews with the major players. James’s dogged documentation makes for fascinating viewing.

Nothing is left to the imagination in Kim Ki-duk’s (Three Iron) heavy-handed, equally topical narrative feature The Net. A poor fisherman from North Korea accidentally ventures into enemy waters where he’s picked up and brutally tortured by the South Korean government. If repetition is the key to learning, it goes without saying that when set adrift in friendlier harbors, he’s picked up by the North Korean government and put through another round of abuse. The allegory follows an issues-first, subtlety-free plan of attack to telling its simple story that left me cold.

Whether you like animation (Window Horses), romcoms (Yourself and Yours, She’s the Boss), Martial Arts (Mystery Kung Fu Theatre), or documentaries too numerous to mention, there’s something for everyone at the Spring Showcase. Tickets are $9 for members and $12 for nonmembers. There’s also an All-Access Pass ($65 for members, $100 for non-members) that comes complete with front-of-line privileges. For more information visit festival.sdaff.org.