And then the singer went crazy... 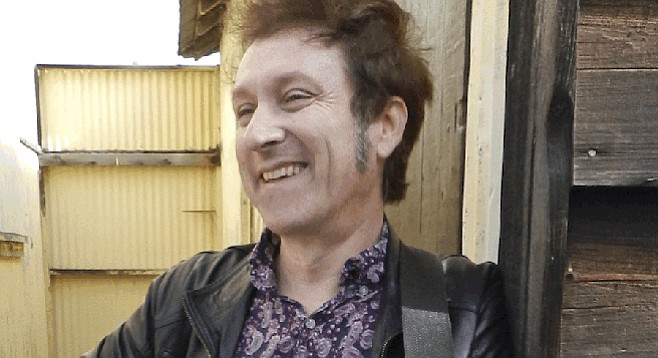 “It’s a power-pop ballad based on the true and tragic story of the murder of San Diego musician Chuck Duerr, a friend and coworker of mine,” says Scott Samuels of his single “Not Far Enough.”

“The crime itself received little coverage, but Chuck was an incredible guitar player, a likeable, happy-go-lucky guy, and someone who was always an early adopter, both in terms of music and music technology.... We worked together at Community Care Network, a not-for-profit company in Kearny Mesa. I first met him when there was a company Halloween costume contest, for which he dressed up as Jimi Hendrix, bringing his Stratocaster to work to complete the outfit. Back in the early ‘90s, he was the first guy I ever heard covering Nirvana....”

The alleged killer was a fellow performer, or at least aspired to be one.

“Shortly before I left [Community Care Network] in the late ’90s, Chuck excitedly told me he had met a singer who was paying him a huge sum of money to play guitar on and produce an album the guy was recording.... The singer went crazy when the album didn’t sell. He had been locked away in a mental institution for several years and believed that Chuck had stolen his songs. When the guy was finally released, he inquired around of Chuck’s whereabouts through mutual friends, and tracked Chuck down to his house in Boulevard. The police found Chuck’s body on the stairs inside his house, with a bullet wound to the head. The singer guy was tracked to another state, where he was found dead in his hotel room, a suicide....

“The song basically tells the tale of a guitarist whose fortunes were on the rise, and a singer experiencing an arc in the opposite direction,” says Samuels: “You bought a house and a brand new car/ He kept thinking he could be a star/ He’d come so far but it just wasn’t far enough.”

Scott Samuels appears April 23 at the next edition of Songwriters Acoustic Nights at Bethany Lutheran Church in O.B.