On the way to the “super bloom”

The first bite was reminiscent of a backyard barbecue 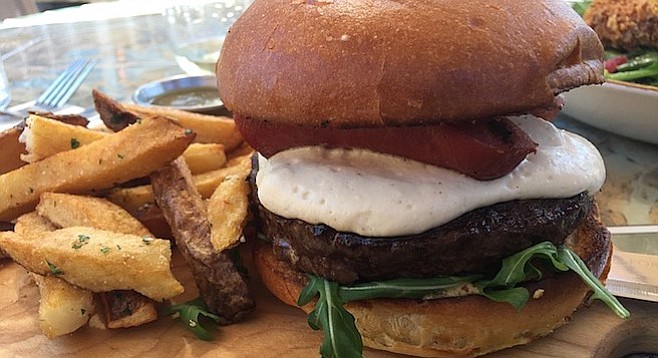 We didn’t know where we were going, not at first. All I knew was that it was a beautiful Saturday afternoon and I wanted to drive, ideally toward a field of flowers, as my news feeds were filled with images of San Diego’s “super bloom.”

As we headed north on the 5, impulsively I decided to exit onto the 56. “East is where all the flowers are, right?” I was asking David, who was seated in the passenger seat, equipped with the map on his phone and tasked with finding us a place to grab a late lunch. “Maybe we should go all the way to Temecula,” I said.

But David wasn’t up for a road trip, and he’d stumbled upon a map pin that intrigued him — a place called The Wooden Spoon in Escondido. At first, I balked. “Escondido? There are not going to be flowers in Escondido, not outside of Hacienda de Vega,” I said. 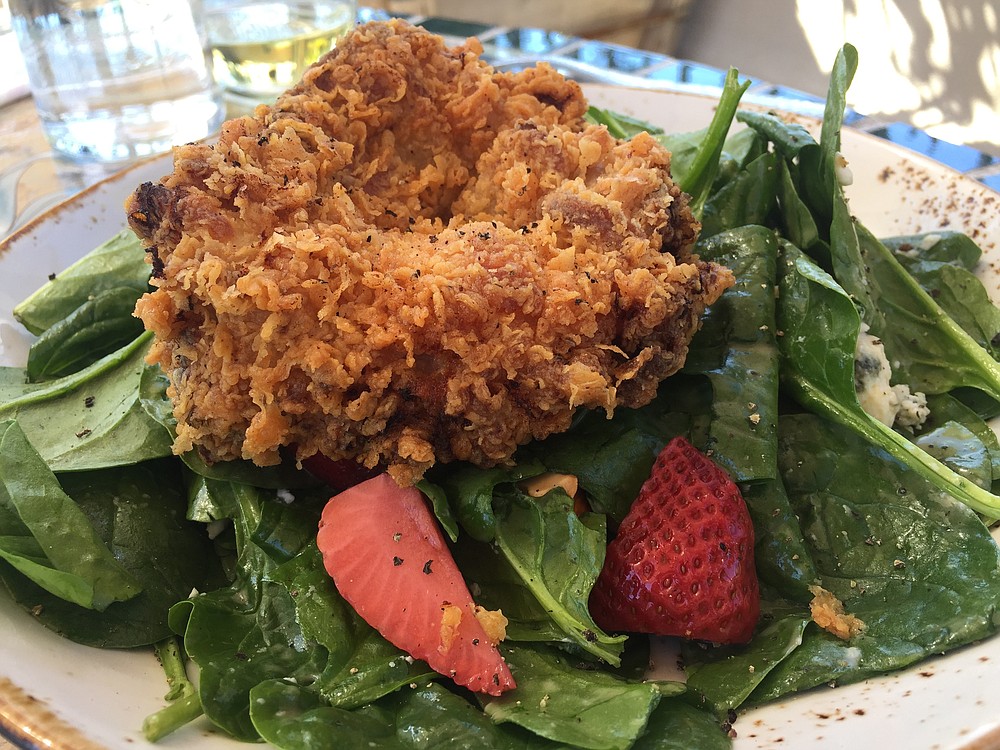 The salad of the day reflected the season by featuring strawberries. Buttermilk Fried Chicken was added for $8, which became the star of the dish.

“How do you know? You haven't been anywhere in Escondido outside of Hacienda de Vega in years,” David said. He had me there, so toward The Wooden Spoon we went.

It was a warm and sunny afternoon, so we opted to sit at one of the tables outside. Even though our only view was of a busy industrial road, the patio was casual and relaxing, with red umbrellas providing shade and a low wall with a wrought-iron fence enclosing the dining area. The lunch menu was simple with about a dozen options, from salads and a soup of the day to a handful of straightforward-sounding sandwiches including a burger, tuna salad, grilled cheese, and banh mi.

A note at the bottom of the menu informed us that because everything is cooked to order, we should allow up to 18 minutes for our food. So we ordered a glass of white wine and chose to share both the salad of the day and the burger of the day. The chef and co-owner (along with his wife Catherine) is Jesse A. Paul, who hailed most recently from Vivace at the Park Hyatt Aviara. The Wooden Spoon opened in 2014.

The salad of the day reflected the season by featuring strawberries, along with blue cheese and giant spinach leaves. We added Buttermilk Fried Chicken to the salad for $8, which doubled the price of the salad, but it was worth it, as the chicken was the star of the dish. The skin was crispy, and the meat was tender and juicy. The spinach had that fresh-from-the-farm texture that no triple-washed boxed grocery store greens can duplicate.

The Spoon Burger, made from meat ground in house, is only available for dinner. For lunch it was implied that the meat was different, not ground in-house but sourced elsewhere. This seemed odd — I mean, if you’re going to grind it, why not grind enough for both lunch and dinner? But we didn’t press on the issue, assuming it was a cost thing. And it didn’t matter, as we were going to order it anyway because the preparation of our only burger option sounded interesting: the beef patty was topped with beer cheese and a grilled bratwurst ($14.50).

The first bite was reminiscent of a backyard barbecue, the kind where you can’t decide whether to go for the grilled burger or hot dog and your inventive, fancy-chef brother-in-law says, “Why not both?” and puts it together with beer cheese and peppery arugula and a toasted bun and makes a whole thing of it.

The burger comes with House Fries, which are made from Kennebeck potatoes and seasoned with sea salt and parsley. For 50 cents, you can get a sauce — that includes the ketchup, which is also homemade. We sauce-splurged for a dollar and ordered the ketchup and the Spoon Sauce, which is spicy and green, like a chile verde. I would have liked a little more of the ketchup, especially since we were paying extra for it. It was gone well before we’d finished the modest amount of fries.

All in all, the meal was pleasant enough to keep me from complaining about not seeing those flowers in Temecula.

As a style point, shouldn't a restaurant review provide the street address? And even the phone number? Oh sure, it's easy enough to look it up, but a complete review isn't complete without it. BTW, I've never heard of the place.

Did you try clicking on the link (in the blue font)?