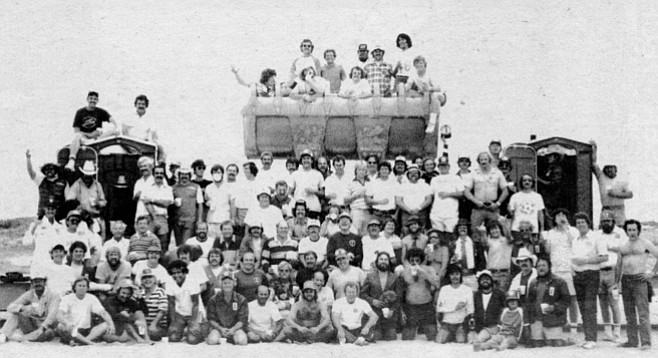 For Big Kids Only

The foot of Redondo Court was a focal point for a couple of reasons. It was the end of a line when streetcars ran through Mission Beach, creating a natural stopping point for everybody. When the streetcars were eliminated in 1939 it turned into the end of the line for a bus route. Also, there was a bath house there until 1948, and a permanent lifeguard tower; it was a natural place to hang out and play over-the-line. 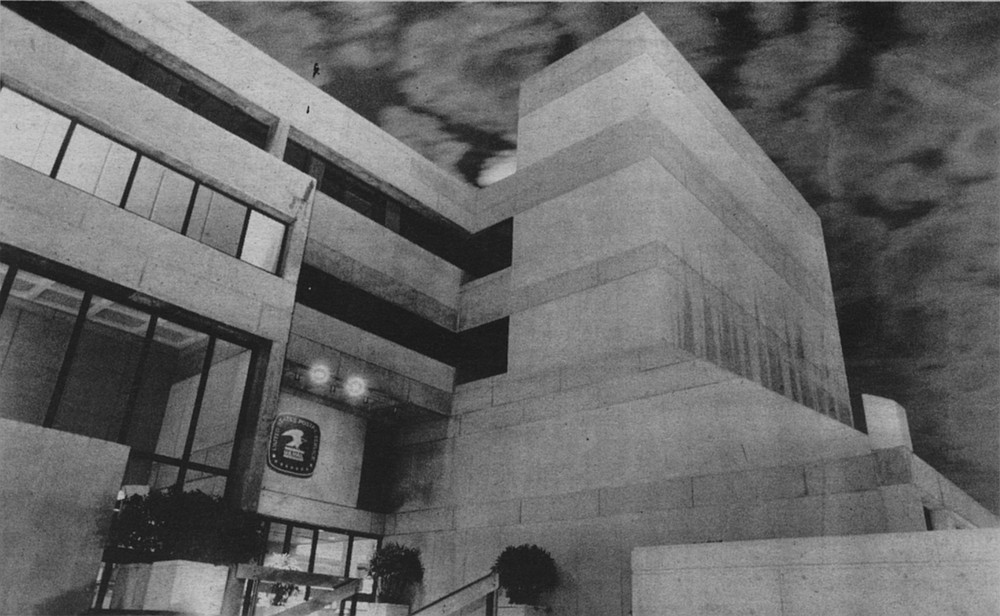 Midway Drive U.S. Post Office. Workers, other than clerks and carriers, usually work eight-hour shifts between the hours of 6:00 p.m. and 7:00 a.m.

“You sell your soul for a few bucks,’’ he says, arching his eyebrows for emphasis. “You tell yourself. ‘Where can you make this type of money without an education?’ Yet many have had educations.” Carlos has a degree in economics from UCSD. “It’s not just the work,” he continues, “it’s the whole damn environment. The management here is the worst I’ve ever experienced or known of. How could a worker feel a part of the place?” 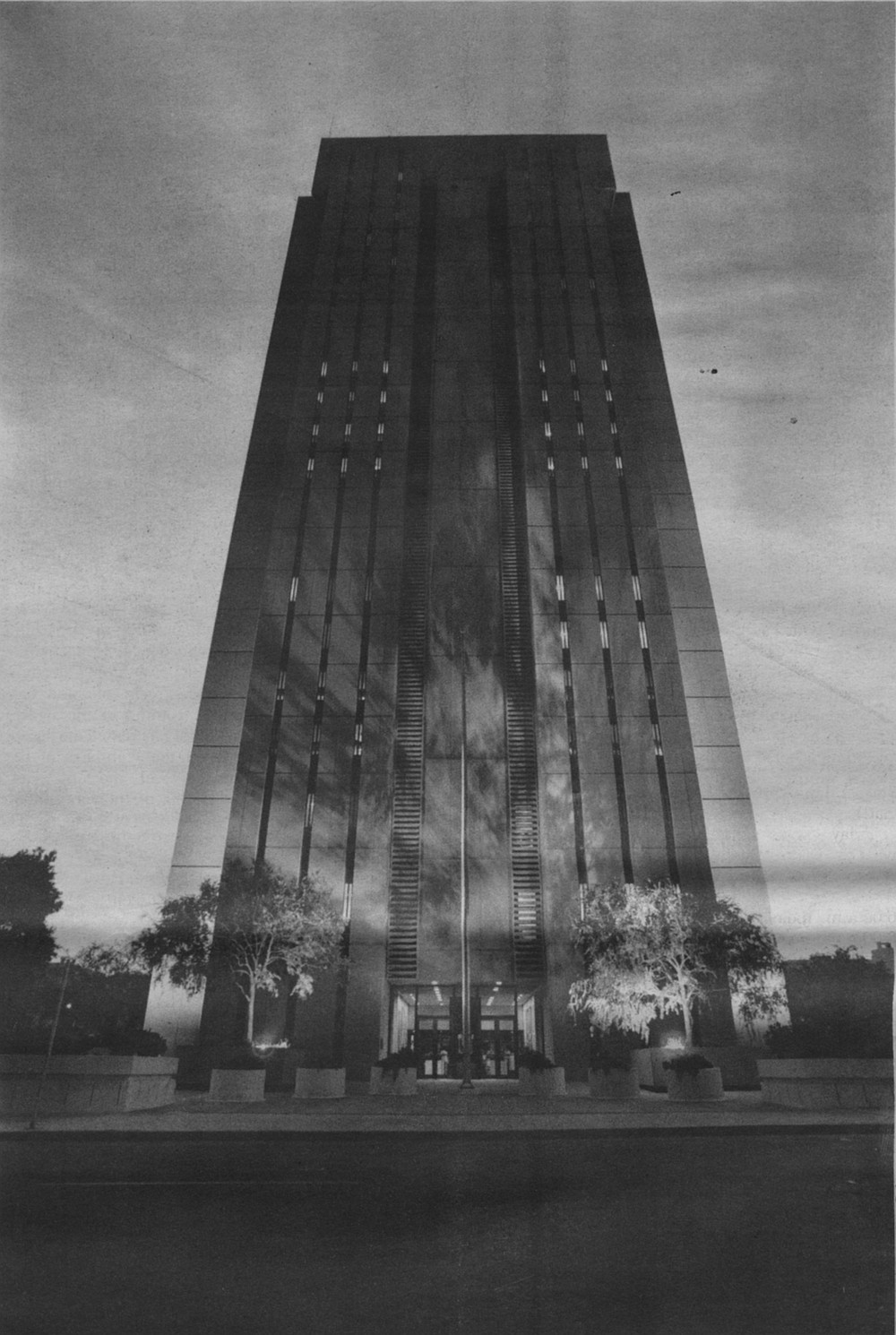 MCC. This place is divided into three camps. White, Black, and Brown. The blacks get along better with us however since we are Americans.

Letters from the Inside

A couple of my Mexican friends approached me with this news. “So & So is going to kill you tonight or tomorrow.’’ My tattooed friend had made up his mind. On several occasions I had informed the people in power that I thought my life was in serious jeopardy. This was laughed off: “I’d like a transfer. My life is in danger, too.’’ So upon receiving the warning, I decided to handle things myself. 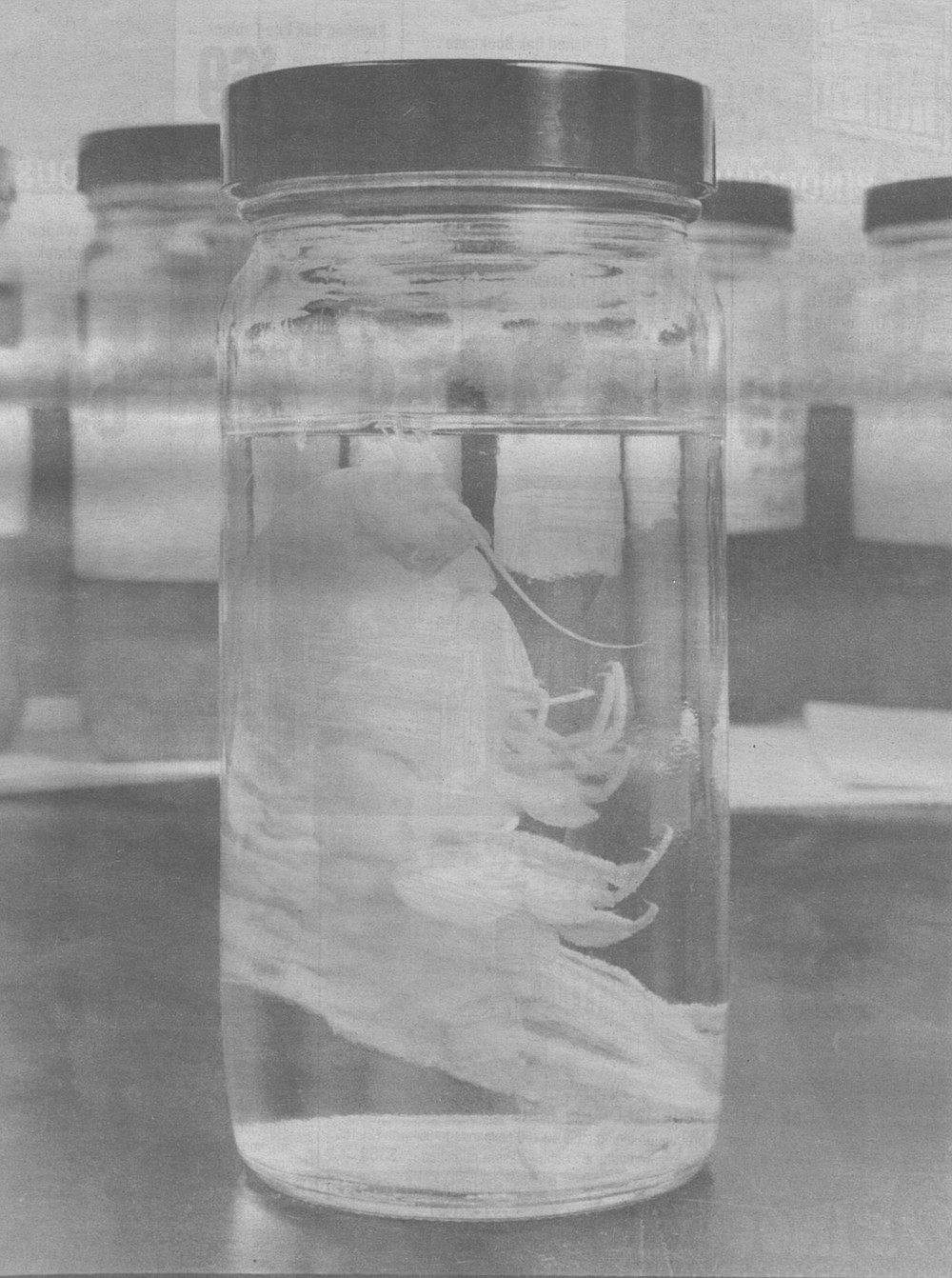 An amphipod. Amphipods are interesting because they have these things in their guts. You can isolate a large variety of very interesting microrganisms.

O We Sail the Oceans Blue and Our Amphipod's a Cutie

Kaufmann is gutting mackerel with a filleting knife and wrapping the gory chunks of fish in screen-line black netting material. This is bait for the amphipods. When the trap is retrieved and opened, the black netting should be covered with amphipods trying unsuccessfully to feed on the mackerel. "We don’t want the bait to be actually eaten because we want an idea of what’s in these things stomach’s ordinarily at that depth," Kaufmann says. "Also, if they eat the bait... well, we’ll run out of bait.” 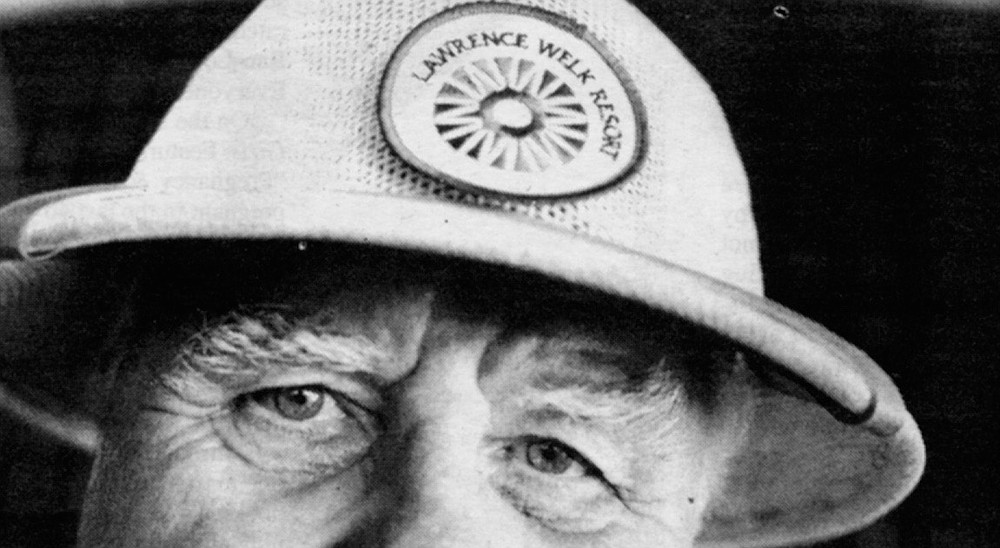 The guard: a smiling bejowled grandfatherly type like a town father on The Andy Griffith Show, someone who’d’ve offered Opie an apple for the answer to a tricky math problem.

Fewer than ten porkers, male, not all of them bald, most remaining hairs grey, in V-necks, cardigans, crew necks (red, beige, white, green), no conspicuous jewelry; an equal number of fatties, female, with 2-lb. earrings, hair recently in rollers, lightly teased and sprayed, some golden blonde, some silver-blue (but no pink), primary-color sweaters, decorated w/ embroidery and doodads. Underneath sweaters, both sexes, a shitload of Ban-Lon (does that still exist?) in lieu of current synthetics. 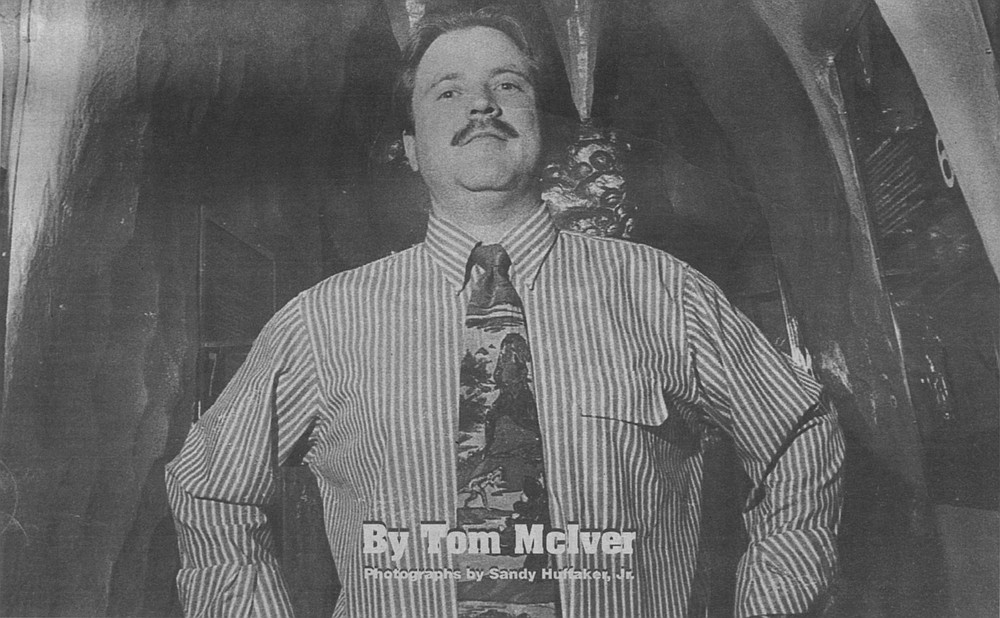 Curator John Rajca Rajca assured me that the hostile coverage, particularly a critical CNN report, had generated a surge of interest.

A Little Bit East of Eden

There are also sharp disputes about Noah's Ark within the Creationist movement. Some years ago, in the ICR museum, I helped John Morris, their principal ark investigator, look for signs of the ark in telephoto slides he took of various likely sites on Mt. Ararat. Morris has not yet found the ark but remains convinced it is on Ararat because of all the reported sightings. ICR presents many of these photos in the museum's ark exhibit. 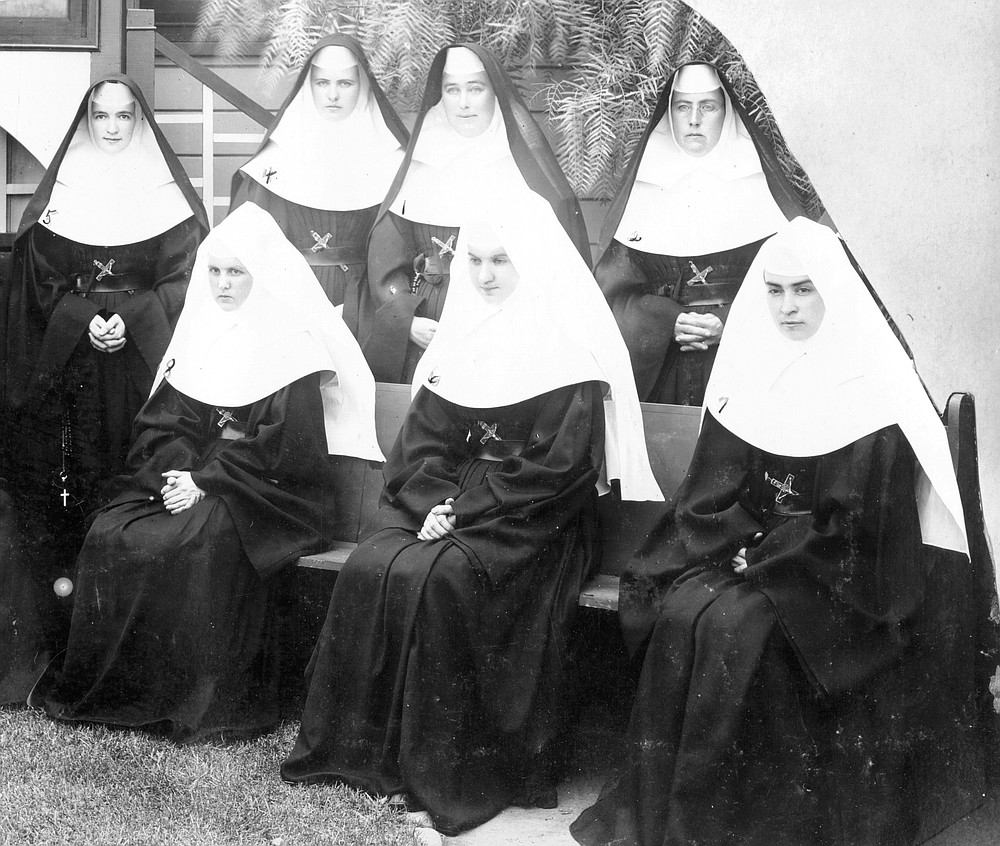 Ten patients are now being cared for at the Sisters of Mercy Hospital, Sixth and H. Yesterday a very delicate operation was performed there by four surgeons. The sufferer was a girl of 12, who had accidentally swallowed a piece of wire two weeks before. It stuck in the trachea and refused to come up within reach or to go down, so that she could speak only in a whisper. An incision was made into her windpipe, the wire removed, and the part sewed up.

Sun broke through the morning haze as the boats commenced. The clubhouse – two two-story structures joined by a one-story link in the center – creaked, and balked, and groaned. The trip, nudging across the bay, took three hours, during which every window shattered. “Unbelievably,” says historian Iris Engstrand, “the scheme worked!” When high tide ebbed, the clubhouse dripped dry on 25 pilings. It required numerous internal repairs, but all agreed that the move was a success. 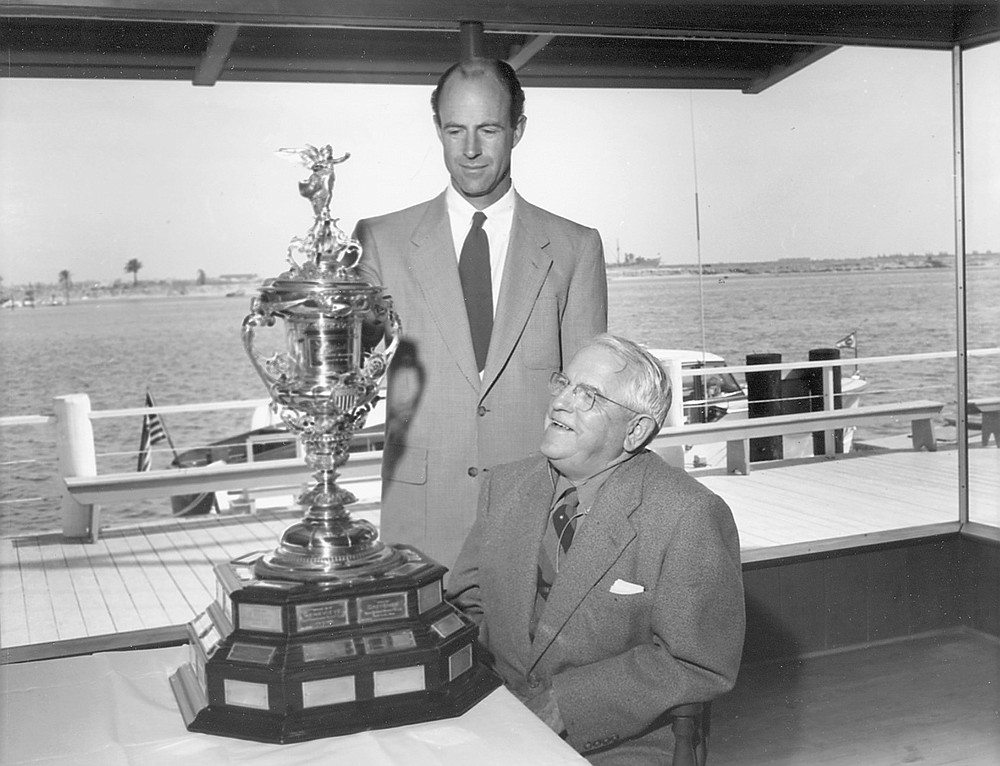 Gary Gould (standing) and Alonzo Jessop with yacht club trophy, 1953. Commodores of the club include Jessops, Goulds, Frosts, Frazees, Kettenburgs who have steered local history for the last 114 years.

Yachtsmen Are Mindful of Ladies

Shelter Island evolved as an afterthought. The dredging created an area where sail and power boats could come in and make a turn. Plus, it provided much safer anchorage than before. The island started as a place to dump leftover “spoil” from the channel. Charles La Dow: “The name Shelter Island, chosen by [club] members, was no euphemism. Low as that sandspit now was, the southerlies would, hopefully, no longer devastate us with heavy chop.”

Soon, of course, we’re talking Vietnam. “It basically ruined my life,” says Rudy. “I can remember that first day of combat, when they rolled over this dead soldier. He was a kid. Vietnamese. But his face — he looked just like my younger brother. I was so…shocked. After that I found I couldn’t hate the enemy.” Rudy was a Marine, 20 years old. “That tour in Vietnam turned me into a loner.”