And Bill Maher pays for it 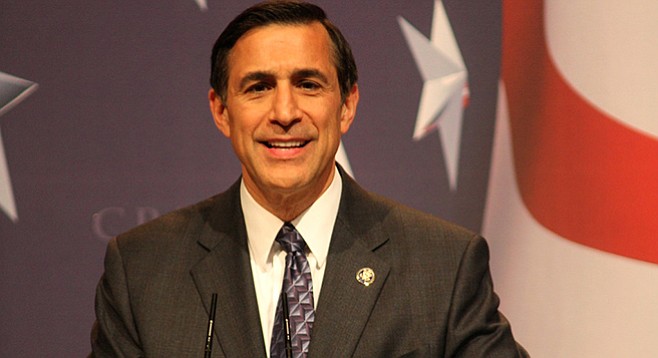 North County congressman Darrell Issa made news when he appeared on liberal Bill Maher’s HBO talk show in late February, calling for a special prosecutor to investigate Russian meddling in last year’s presidential election. “We have to work with [the Russians]; we don’t have to trust them,” Issa said. “We need to investigate their activities and we need to do it because they are bad people.”

Then Maher grilled Issa on whether Donald Trump’s attorney general Jeff Sessions should recuse himself from the investigation. “You’re right that you cannot have somebody — a friend of mine, Jeff Sessions — who was on the campaign and who is an appointee,” Issa agreed. “You’re going to need to use the special prosecutor’s statute and office.”

As it happens, Issa, the wealthiest member of Congress, with a net worth said to exceed $750 million — far more than Maher’s estimated $25 million — got his tab to the show paid for by Maher Live, Inc., the program’s production company. A disclosure statement filed with the House of Representatives ethics committee reveals that Issa’s transportation to and from Oceanside cost Maher Live $786, along with a room at the posh L’Ermitage hotel in Beverly Hills for the GOP House member valued at $457. “I was invited to appear on the Bill Maher [sic] to discuss the legislative outlook for the policies put forward by the Trump Administration and the [Michael] Flynn investigation on his dealings with Russia,” wrote Issa in his trip justification report, dated March 13.

Back in February 2008, Issa received $825 for appearing on what was then known as Real Time with Bill Maher. “A chauffeured sedan will drive him from his home in Vista, CA to our studio in L.A.,” said a declaration from the show’s talent supervisor. The congressman subsequently donated his fee to an unidentified charity, according to a later financial disclosure filing.

This just comes down to longtime TV show rules regarding guests. When multi-millionaire Tom Hanks goes on SNL, he probably gets R/T airfare and hotel paid, plus an appearance fee. Most likely he donates the money. But when Issa goes on a junket abroad, he should definitely pay his own way. And he should never accept free meals or trips from lobbyists.