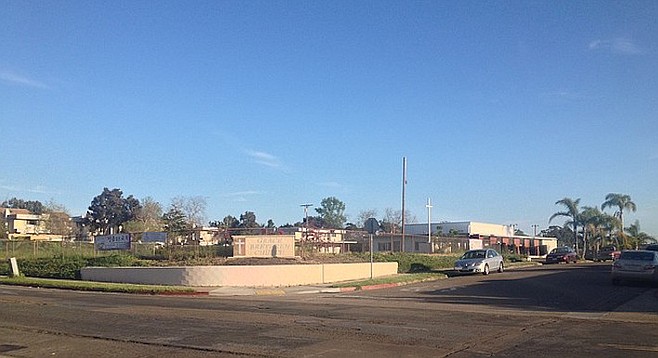 On March 21, Sam listened to an engineer from Leppert Engineering present a project to the Clairemont community planning group. The project proposes to build eight houses on what is currently a one acre church daycare play area (the entire lot, including church facilities, is approximately 2.8 acres). “The church on that site wants to create some cash flow by building a few homes on excess property. This is the first step — gaining approval for subdivision of the property. It was well received. The church needs cash, the community needs homes, no outrageous density, everybody wins.” 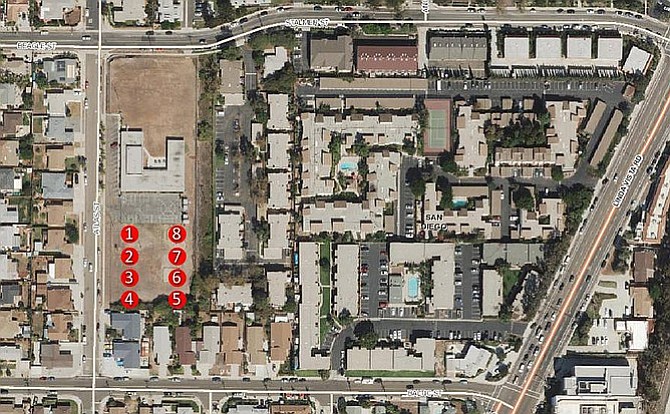 Ariel view of project site with approximate position of houses. One shared driveway will be between Homes #1 and #2 and the second between Homes #3 and #4. These driveways will allow access from Atlas for the homes in the back (#5-8).

The property is currently listed for sale at $725,000. The listing states that the buyer must obtain a subdivision as a condition of the sale. This subdivision is what’s being addressed now before things move forward. 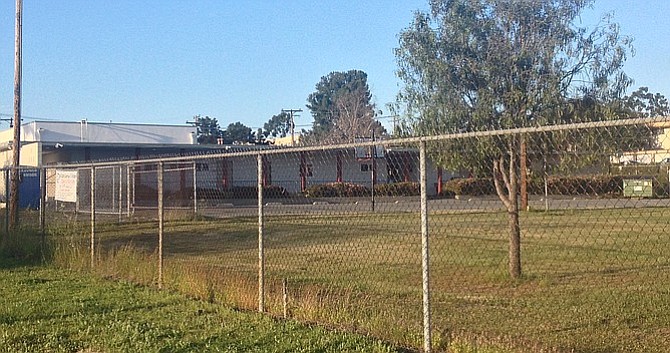 Church parking will be moved behind the church to make room for the residential development.

According to their website, the San Diego Grace Brethren Church has been at the same location since 1957 (3455 Atlas Street between Stalmer Street and Baltic Street). The church is sandwiched between two large, mostly vacant, lots. The project proposes to build the houses on the lot nearest Baltic and move the current play area to the lot near Stalmer. The existing church plans to stay put.

The city’s October 2016 permit application lists the church, Leppert Engineering, and Blue Centurion Homes as applicants. In October, they applied for permits to subdivide the property into nine lots (one for church operations and eight for residences), to relocate church parking near proposed development to behind the church, to vacate a street along Atlas and Stalmer, and to release the new homes from the current church/daycare conditional permitting.

While the project engineer discussed the proposed houses, driveways, and traffic patterns — what he was actually there to discuss on March 21 was all about getting an old reservation for a “future” street off city maps. The area is located between what is now the church fencing and the apartment complex to the east. When the apartments were built in the 1970s, they built partially into this area. Since it now isn’t wide enough to ever be turned into an actual street, the church is trying to get it vacated so they can configure the residential layout.

Each residential lot will be between 5,000 to 6,244 square feet and will use shared driveways, entered at from Atlas. The two shared driveways (located between houses 1-4 in front) will provide access to the houses in the back (houses 5-8). The current residential zoning (RS-1-7) is in line with the proposed square footage.

Repeated attempts to get someone from Leppert Engineering, Blue Centurion Homes, and the church to go on the record were unsuccessful. Charles Johnson from Leppert was the only one to get back to me. He said he wasn’t at liberty to discuss anything without the owner’s explicit consent.

The city shared details of their initial review of the project in December. The city is currently involved in their second project review.

Tim Daly is the city’s project manager for this proposed development. I asked if the city had approved any similar projects in the past. Daly said that there was a project in Mira Mesa circa 2005 that created 16 residential lots on approximately 2.6 acres within an existing church facility at 11035 Pegasus Avenue.

The city’s December letter, addressed to Leppert Engineering, stated that they hadn’t identified any issues of significance with the proposed project.

However, various issues were noted that needed addressing, involving a wide range of disciplines. As far as parking, the city stated that a minimum of 16 parking spaces was required and that church parking requirements needed to be determined. Since residents will be using a shared driveway, a shared parking agreement is needed. The city also noted an assumption that no significant grading will need to be done because the lot is flat. As far as affordable housing, I don’t have confirmation either way, but it seems doubtful that 5,000+ square foot homes would land in that camp.

Lisa lives across the street from the church. She said she remembers getting notification a few months ago but hasn’t heard anything since. “We are extremely concerned that we never got a notice to the planning meeting [March 21] and have missed our opportunity to participate in the process. We know nothing about this project besides it will be eight residences. We didn’t know if it would be individual homes, condos, or townhomes.”

Tiffany also lives across the street from the proposed project. She said, “I'm not that excited about having eight new homes on my street. Traffic and parking will definitely be worse. Atlas Street is already crowded by the tenants from the apartments on Stalmer Street. However, if the church needs money and this is the best solution that they've come up with to avoid closing their doors, then I guess I can accept that. It would be much worse if the entire property was sold which would really add a lot more traffic than the proposed eight homes.”

Upcoming agendas for Clairemont Community Planning Group meetings are posted on Facebook. One can also request that they be emailed directly.

My first reaction was that 5,000 square foot houses in Clairemont didn't sound at all correct, and it wasn't. A careful read of the story revealed that the LOTS would be that size or larger. They aren't planning for Rancho Santa Fe-sized homes there at all. The headline writer needs to revisit this story and redo the sub-headline.

No one on the project team (land owner, project engineer, or builder) would go on the record. We don't know what their actual configuration will end up being. The current zoning allows for up to 30 feet with a floor area ratio that lends itself to larger homes. They are speculating on perhaps 6,244 sf lots The developer is focusing on vacating the street and getting the subdivision approved before the land can be sold to them. We won't know details until that time.