The other shoe never dropped

A true artist at the heart of every hack 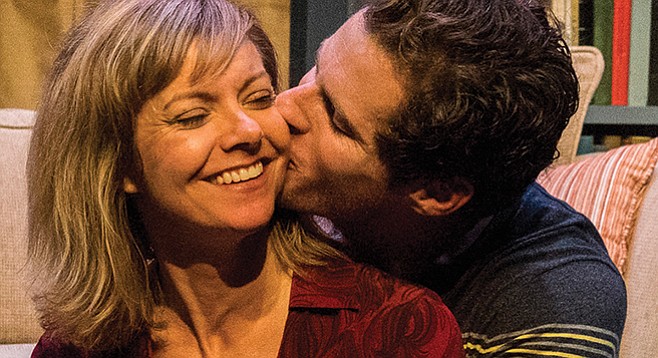 I cynically spent the entirety of Laura Eason’s Sex with Strangers, which played last month at San Diego Rep, awaiting the other shoe. It never dropped. Ethan (Connor Sullivan) blogged about picking up girls in bars and got a book deal for it. At least on the surface, he hates the life where he’s been typecast as a superficial uber-bro. I figured his sensitive soul for a ruse, a cunning attempt to trick Olivia (Lisel Gorrell-Getz) into bed and the audience into sympathy. Indeed, during intermission, I overheard the two younger women say they “liked Ethan, even though he’s a bit ridiculous.”

Joke’s on me. Unlike the rapey pickup “artists” on whom Ethan is loosely modeled, the character’s sincere longing to join the literati runs more than skin deep... which reminded me of The Wire.

For those who don’t remember: in the show, Stringer Bell wanted to move his crew out of drug dealing and into real estate development. His attempts to go straight showcased an odd mix of clever ambition and pathetic naivete. Later, Marlo Stanfield, who replaced Bell as West Baltimore’s leading drug kingpin, ended the show meeting with those same developers in an attempt to legitimize his “business” interests.

I’ve read about that same pattern in real world organized crime. The idea is that crime bosses make good businessmen, and they would have started companies but for the fact that doors were closed to them for economic or demographic reasons. Having succeeded in crime, they later have the means to invest as conventional entrepreneurs, realizing a kind of American Dream that involves fewer chances of assassination or imprisonment.

Ethan is like Stringer Bell in that regard. Minus the threats of death and incarceration, he wants to be a real writer, like Olivia, but he doesn’t quite know how to get there. Also like Stringer Bell, he fumbles during his mad run for the literary end zone.

I’m not sure whether I believe that there’s a true artist at the heart of every hack, but I almost want it to be so, because what could better affirm art’s integrity than that its greatest defamers aspire to be more legit?