The challenge of Highway 79 between I-8 and Julian 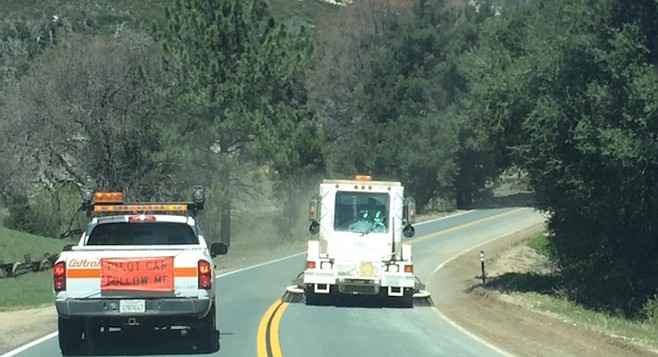 “We get a crash almost every weekend, said Rick Campbell regarding State Route 79, “these are highways and people drive them like they are backcountry roads.” Campbell, 66, is owner of the The Birdwatcher in Julian, and said that he expects about four to five thousand people to drive in before the weekend. 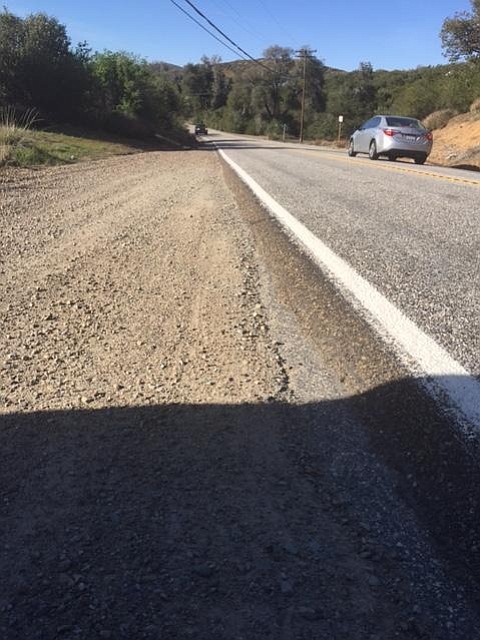 Fresh dirt that was spread on the sides, past the pavement on the shoulder.

On March 29, at approximately 1 p.m., drivers heading north and south on 79 had to make a full stop a few miles north of the Interstate 8.

“We had to wait for about 15-20 minutes,” said Maria, a San Diego mother, who was travelling with her family for their spring break vacation. They were driving north on 79 (before Cuyamaca State Park) when the Caltrans worker stopped traffic. “The Caltrans guy said that they were fixing the edges of the freeway where the pavement ended on each side (by the shoulders),” she said. After the wait, a caravan of about 10 vehicles then passed Maria’s vehicle, which was lead by a Caltrans truck. “The Caltrans truck [driver] then made a U-turn and then parked in front of us (about eight vehicles behind her),” she said. A “PILOT CAR FOLLOW ME” banner was propped on the Caltrans tailgate which led Maria and the rest of the automobiles up north. The escort drove slowly and a “street sweeper looking vehicle” passed them on the right side. She noticed that there was fresh dirt that was spread on the sides, past the pavement on the shoulder

“The Caltrans guy (holding the stop sign) told my husband that if the tire meets the side of the road when it is uneven,” Maria said, “that could be dangerous.”

Candy Fangrat is a waitress at Miner’s Diner in Julian. “Many of the accidents that happen on that freeway are motorcycles,” she said. In the last seven years that she has been serving the tourists and locals; she’s heard of many accidents on the windy two-way state routes. “It’s sad,” she said, “you have to be careful.”

Shortly after the Caltrans sectioned off part of the freeway, a pickup truck was seen being being loaded on a tow-truck.

“That’s a normal situation here (the fixing of the freeways and the shoulders),” said Alina from S&R Towing. She said that when it is wet, then dry, and there are a lot of people driving – the freeway sides tend to have a drop-off (where it meets the shoulder). Her company has been rescuing people’s vehicles and motorcycles in the area since 1986.

“If you go too far to the left, our car shakes when the tire hits the middle (centerline rumble strips),” Maria said, “and if it goes too far to the right, our tires might catch the uneven section; and the car might pull.”

The Caltrans website although posted a bulletin that read: SR 79 [IN THE SOUTHERN CALIFORNIA AREA]

“They are fixing the sides of the freeways for our safety,” Maria said, “the extra wait to ultimately get to our Julian apple pies is worth it. Thank you [Caltrans].”

Why do they call Cal 79 a "freeway"? While it is a state highway for sure, none of the things required of a freeway are there. It isn't limited-access, it is curvy, it is narrow, and is only two lanes.) It is an old highway that was intended for light use back when it was built decades ago. Now it gets far more use and many more heavy trucks than ever, all of which can erode the shoulders. (That's what the "sides" are called in road talk.)

It appears that the writer of the article has little "road" knowledge. All rural roads need "shoulder" work especially after rains. The ideal is to have a smooth transition from the roadway onto the shoulder. This, in case the Mike doesn't understand it, it called maintenance. Hwy 79, like many rural roads, were never intended to carry the volume of traffic they now do.

Well yes, Alex. That was what I was getting at, but you stated it more clearly than I did. We have a major shortfall in the state now, in that the roads, highways, and freeways are handling far more traffic than they were ever designed to carry. Worse yet is the use by heavy cargo trucks that run right up to the max weight limits imposed by the state. Then the drivers, under the gun to keep tight schedules, drive those rigs like they are Camaros or Mustangs or BMWs. Right at the top speed that will keep the rig on the road, tailgating slower-moving cars, and impatient with every delay, they pound those old highways into rubble.