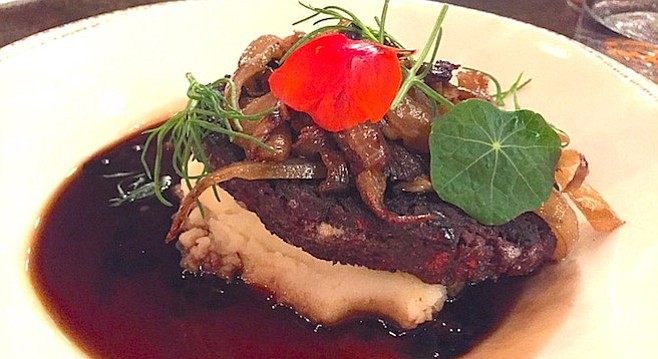 We are all omnivores by nature, but I am also one by choice, as in I choose to eat a variety of foods that include meat, eggs, fish, and dairy. However, this doesn’t mean I can’t thoroughly enjoy a meal free of animal products. As my vegan friends know, there’s plenty of satisfaction and nutrition to be had from fruit, nuts, vegetables, beans, and grains. And because I have many vegan friends, I am always on the lookout for restaurants we can enjoy together. I am happy to note that the number of animal-free options is increasing faster than ever. One of the newest vegan joints in town is Donna Jean in Hillcrest. 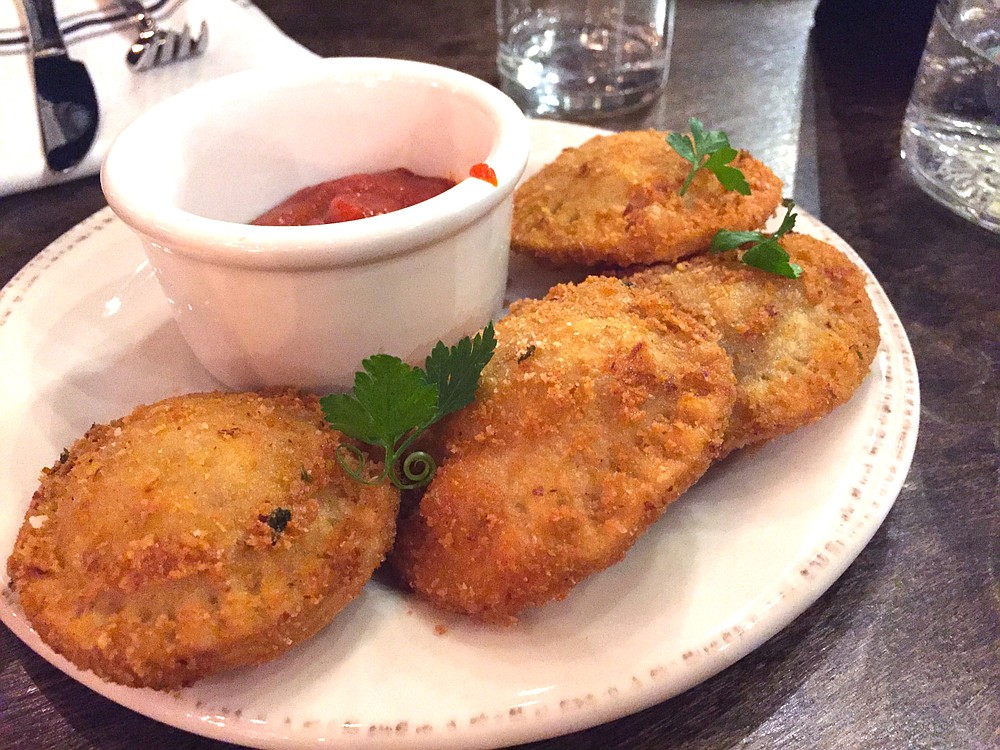 The place is named for the chef/owner’s mother, who passed away at a young age due to breast cancer. On the restaurant’s website, Chef Roy shares his belief that his mother’s cancer could have been prevented had she stuck to a plant-based diet but then confuses matters by clarifying that his restaurant is most certainly, in all caps, NOT a “health food restaurant.” Though if he believes cancer can be staved off by eating vegan, then one could argue that “healthy” is exactly what his vegan restaurant is intended to be. Regardless, we were there to check out the food and ambience, not to ponder our frail mortality, which made me wish I’d not checked the site prior to visiting, but there it was. 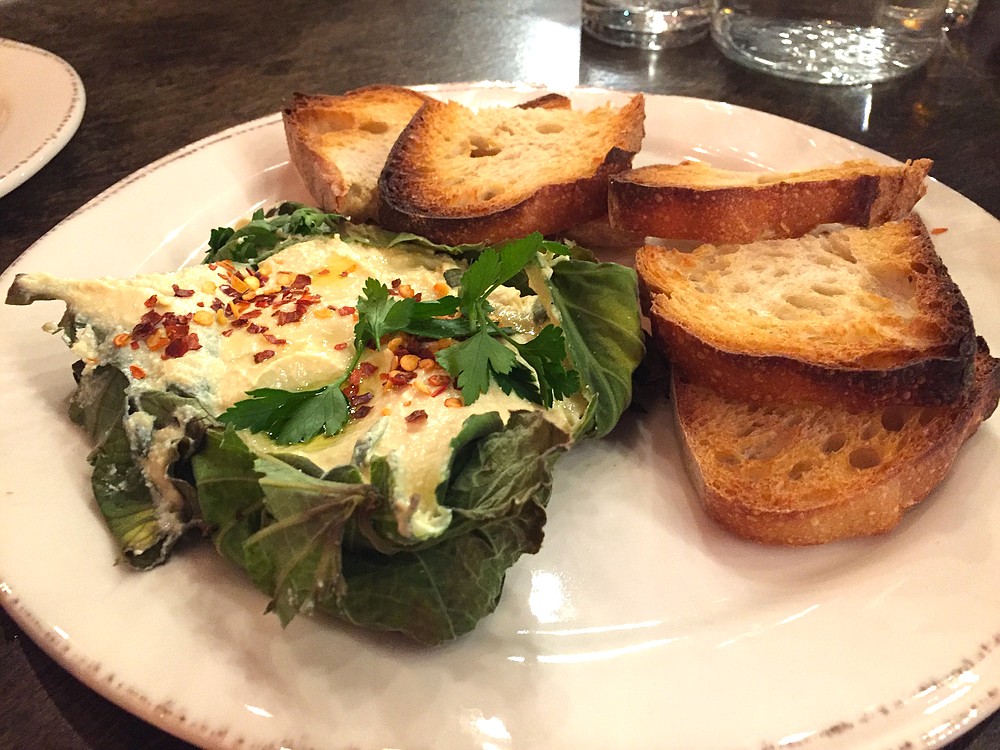 The Baked Ricotta was the favorite bite of the evening

The space has a sizable outdoor patio, and that’s where we chose to sit, primarily because the magical pull of the white lights strung throughout two large trees. The staff was friendly and helpful; our server was able to answer every question we had about each dish, and we ended up taking her recommendation for a few, beginning with the Toasted Ravioli ($9). These fried ravioli were served alongside a saffron arrabbiata. They are great for a group of four, because everyone gets one, and it’s a satisfying crispy, then chewy way to begin. 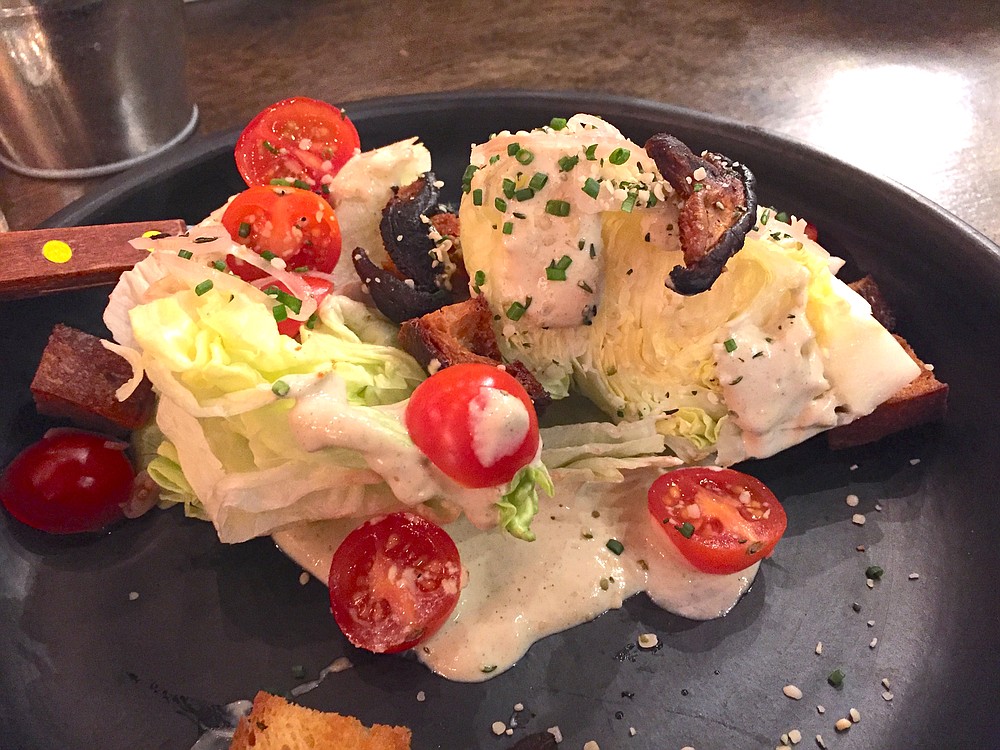 The Wedge Salad was served with a creamy, hemp-based dressing

We also shared the Baked Ricotta ($10) as a starter. This was my favorite bite of the evening, which is saying a lot, because everything I tasted was delicious. The ricotta was served warm, which turned off our friend Mel, but everyone else seemed to like it. Travis and I cleaned most of that plate. Of course, it’s not actually ricotta but a ricotta-like textured tofu. It was flavored with “herbs,” but what shined through was the pleasant freshness of the lemon, which cut the rich spread. 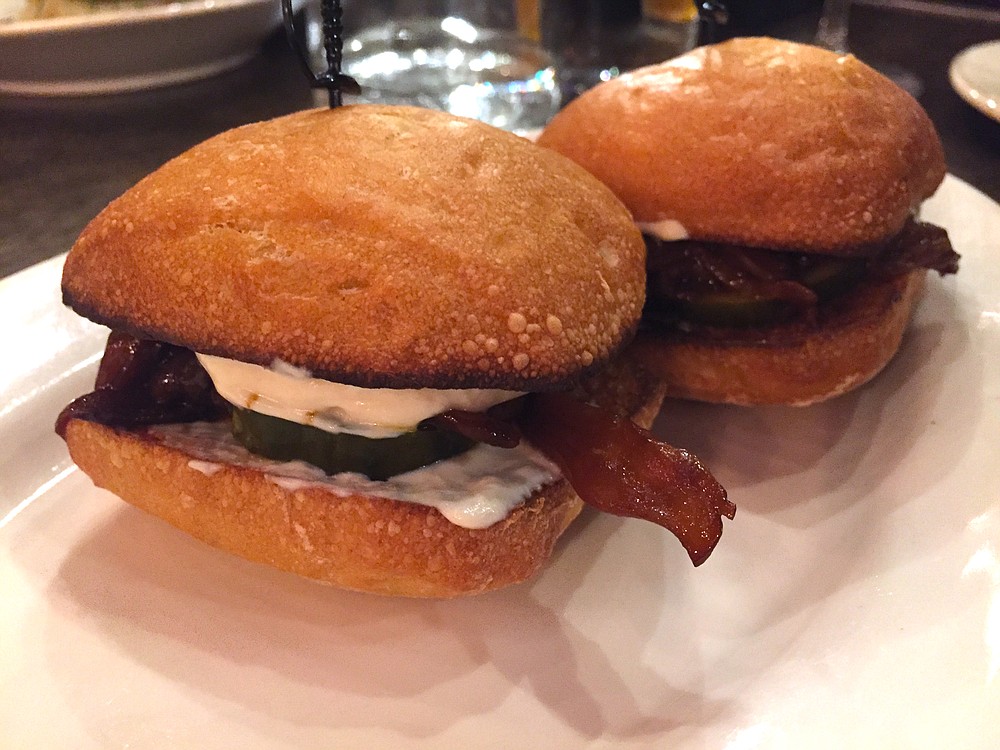 Smoked Oyster Mushroom Sliders. The BBQ sauce was too smoky for some.

I ordered the Wedge ($10), a salad with iceberg lettuce, croutons, cherry tomatoes, pickled shallots, and “black pepper shiitake” mushrooms. It was served with a creamy, hemp-based dressing. No, the hemp dressing didn’t taste like weed. It was more reminiscent of a Caesar and quite tasty. It was a light, balanced, flavorful, and filling dish considering the bulk of it was lettuce. It was listed as a starter, but it worked great as an entrée. 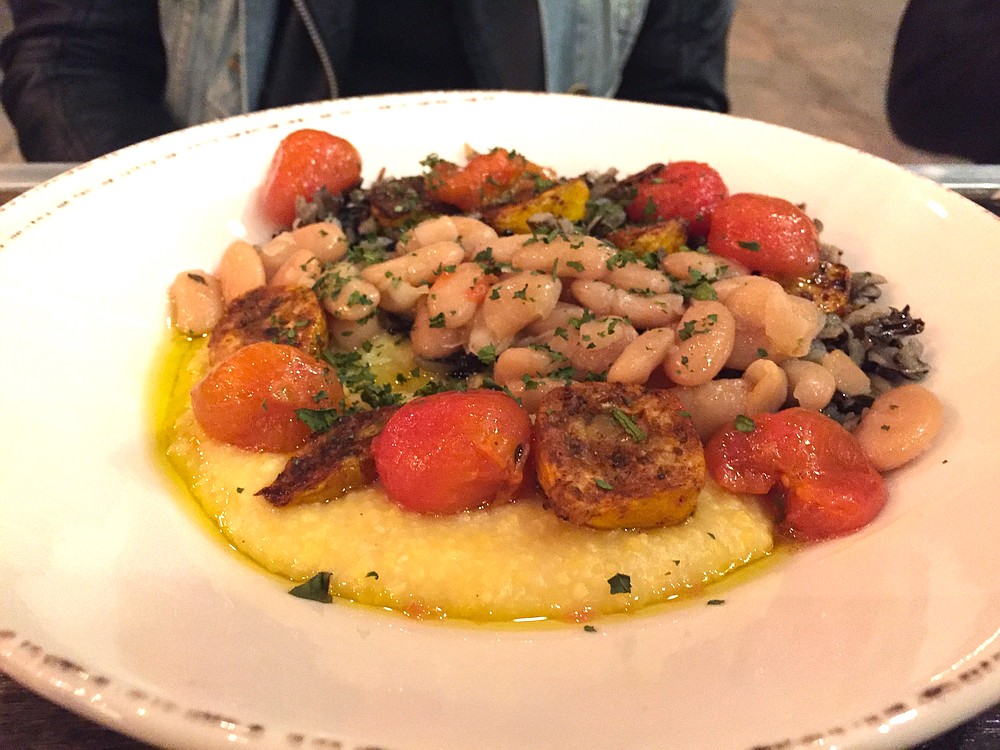 The Grits were delectable, not too buttery

David ordered the Smoked Oyster Mushroom Sliders. The night we were there they were listed as a “Starter” for $13, but on the website it’s since changed to $15 and is listed under “Supper.” The BBQ sauce was fairly smoky, a flavor David loves but I don’t care for. The mushrooms, in the sauce, are dressed with pickles and “mayo.” I wasn’t interested in them, but David says he’d probably order them again. By the way, most vegan restaurants have abandoned the quotation marks around ingredients such as ricotta or mayo that typically use animal products because it’s assumed that if it’s a vegan restaurant that ricotta is dairy free and mayo is eggless, but I chose to include quotations marks to avoid any confusion.

Our friends got the Grits ($13) and Salisbury Tempeh ($17). I didn’t taste the tempeh, but Travis said it was fantastic, and he cleaned the plate of onions, mushrooms, mashed potatoes, and “red-eye gravy.” This style of gravy is typically made using drippings from pan-fried meat and black coffee. Here, that umami quality was likely derived from mushrooms.

I didn’t taste the confit tomatoes, heirloom beans, seared squash, or crispy kale on Mel’s plate, but I did taste the grits, and they were delectable. They had a cream-of-wheat-like texture and were well seasoned. I preferred them to most of the overly buttery versions I’ve tasted. I made a mental note to order this dish on my next visit because it smelled wonderful, and Mel gave it two thumbs up.