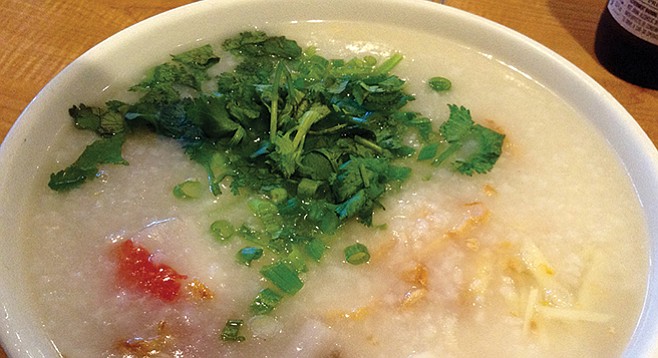 The Eight Immortals are Crossing the Seas. They float by, riding paper mules, lotus flowers, flower baskets, aboard feather fans, storks, even a discarded crutch. 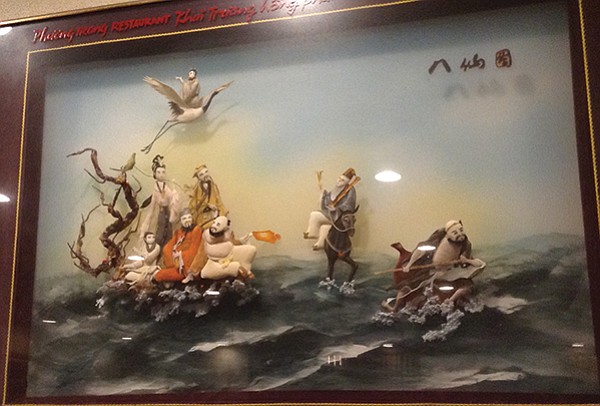 The Eight Immortals Crossing the Seas

People love the Eight Immortals. They represent prosperity and long life. They’re in the painting I’m looking at above the cashier’s desk. Seems they have been drinking and making merry a bit too much and decided to journey forth to discover all the wonders of the undersea realms beyond heaven. Their adventures sound like Don Quixote’s.

Me, I’ve also decided to venture out. I’m in Kearny Mesa in search of one of the most ancient Chinese dishes around. Hoping I’ve found it in a not-so-little Vietnamese heaven here, Phuong Trang.

But maybe I’ve been looking in the wrong places for this jork (that’s what Cantonese speakers call it). So I took the 150 bus from downtown and then a 44 to get here. Got off at Convoy and Othello, opposite Costco. First thing you hear is, like, giant bees buzzing around above. Montgomery Field. Touch-and-go training. Runway’s a block away.

I headed back half a block to a strip mall. And there, among outlets like Petzone Tropical Fish and Home Medical Supply, was Phuong Trang’s sign: a painting of boats and birds sailing and flying upriver toward a distant mountain.

But why all this trouble for boiled rice? Because porridge, jork, jook, chao, whatever, is the Asian comfort food. And mine, too: I have a sentimental attachment. When I was a kid on a three-year wander around Southeast Asia, porridge was your go-to breakfast, plus, your menudo-style hangover cure. The slow-boiled rice was beautifully gentle on the stomach. 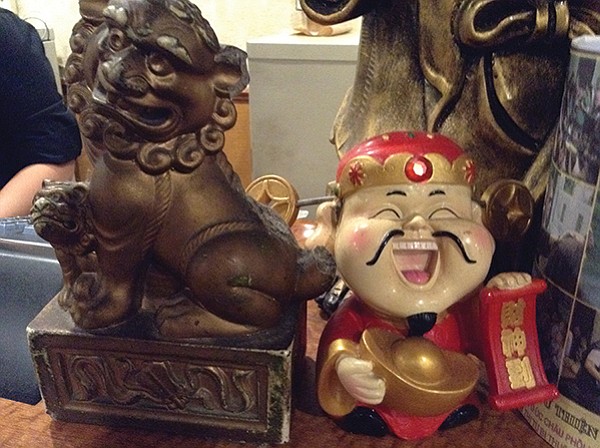 Here at Phuong Trang, I’m waiting for a seat, surrounded by multi-generational table groups. Young couple next door sits with two kids, one in a high chair. Father’s feeding the older girl. Grandma looks on. Wife glances anxiously at her mother-in-law. (And, hey, mother-in-law’s tongue, the spiky green and yellow agave-type plant, is growing right next to them.)

Now an aging son helps his truly ancient parents to a table while their grandkids — or great-grandkids? — buzz and zip around them. Wouldn’t be surprised to see the bà giá (old woman) order what I’m here for, a cháo gà — rice porridge with chicken.

Duy, one of the dozens of waiters flying around, signals. A table has come free.

Foodwise, it’s so tempting to go beyond the porridge. Especially as sizzling dishes sweep past, like the sizzling beef cubes with fried rice. Bo luc lac? did the guy say?

Then again, other waiters zip by carrying these bowls loaded with a forest of greenery. I mean, piles of the freshest-looking lettuce. This must be the rice-paper wraps. Look disgustingly healthy. I also spot dishes like char-grilled pork skewers ($11.95), or Bo Nhung Dam, “thinly sliced beef topped with sliced onions, and cooked at your table in a vinegar fondue.” Costs $16.95. Or $21.95 if you add shrimp.

Duy says the seafood has shrimp, fish cake, imitation crab swimming in it. Sounds good to me. I order that. Pretty soon the chopsticks and napkin arrive, along with a bowl of bean sprouts, lime quarters, and slices of jalapeño peppers. Then the steaming main bowl. Oh, man. The gingery smell in the steam, the hints of red below the surface: imitation crab; the little spread wings of some fish’s fin, the floating green island of cilantro and scallions and celery leaves.

I ask Duy about the plum sauce, the Sriracha, the pepper sauce, the soy. “Should I use any of these?” I ask.

He shakes his head. “Only the pepper,” he says. “The others go with meat like beef.”

So I grab all the bean sprouts and dunk them in, along with the four wagon wheels of jalapeño, and squeeze the limes. And two splots of what looks like chili-vinegar sauce. I take a slurp, chopstick some fish cake up, then spoon in the gingery, gloopy rice. And suddenly I’m transported, back to a stool under a tree beside a little set-up kitchen near the mighty Mekong. Sigh. Back there we called it jork.

But that’s what a taste will do to you. I mean, okay, it’s just porridge. Yet with the combinations in the different mouthfuls with different seafood, flavors shift like currents. And if the rice gets too gentle, you can always crunch a jalapeño wagon wheel in your teeth.

The ancients called Chinese porridge the “first healthy food under heaven.” The Yellow Emperor, who ruled, like, 3500 years ago, started his day with it. This was also the guy who spotted a unicorn. Could there be a connection?

Next time, I’m having chào (jok) porridge with pork and 1000-year-old egg. Should be delicious. No jok.