Fifty years of Kurt Russell puts him in Deepwater 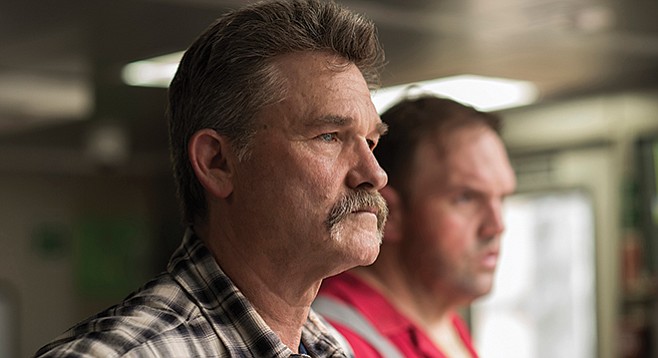 From Disney to Elvis(es) to Plissken and now Jimmy Harrell in Deepwater Horizon, opening Friday at a multiplex near you, those of a certain age would be hard-pressed to recall a period when they didn’t have a Kurt Russell picture to look forward to.

Was there ever a time in his 50-plus year career when it wasn’t cool to be Kurt Russell? Did he “ghost-direct” Tombstone? Assuming that there is something wrong with the business, what does Russell think it would take to make Hollywood great again? For the answers to these questions and many more, read on.

Scott Marks: Is it true that “Kurt Russell?” were Walt Disney’s dying words? He wrote your name on a piece of paper?

SM: With all due respect, how do you know that if he had the energy to go on it might not have read, “Kurt Russell? Kevin Corcoran!”

SM: You have never officially signed off as a director. I read the interview with True West’s Henry Beck where you talk about ghost directing Tombstone...

KR [interrupting]: That wasn’t an interview. That guy did a sabotage number. It was not an interview. He took pieces from a conversation we were having about another movie ... he took pieces of hearsay and wrote an article in True West, okay? That’s the true thing on that guy.

As I said to [Tombstone director] George Cosmatos and everybody else, in making a movie, a lot of different things happen and the object is always to get the movie made. When [screenwriter and initial director] Kevin Jarre was fired, I wanted to make sure the movie didn’t stop being made and would continue on. That’s exactly what happened. George Cosmatos came on board. And as I said to George, publicly I will never speak of exactly what we had to do to get this movie done. That’s the truth.

And that guy wrote that article ... he wrote it as best he thought he could from what he was hearing and from what I said, in terms of giving him pieces of stories — which I was doing off the cuff, with somebody else in the room. And he was looking for a scoop, he was trying to make something happen. I just made sure the movie got done, that’s all I’ll ever say about it. All that matters is when a movie gets made is how it ends up. Did I have a lot to do with it? Yeah. Did a lot of people have a lot to do with it? Of course. All those great actors — those guys did a lot of sacrificing, too.

I told [George] that if the studio heads talked to me and the producers talked to me about what took place on Tombstone in terms of George’s involvement, in confidence I would tell them the private and real truth. Publicly, I have no interest in tainting anything about Tombstone. The credits are what the credits are, and I will leave it at that.

SM: I’m glad you were able to set the record straight. You are an actor, movie star, and cult item in that order. What is it about working in genre films that appeals to you?

KR: I don’t know. I didn’t know they were ... the movies that I did that became cult films or genre films, I didn’t look at them that way. I looked at them as what I was interested in, and how they were going to be done. A few of them just happened to be with John Carpenter [laughing]. 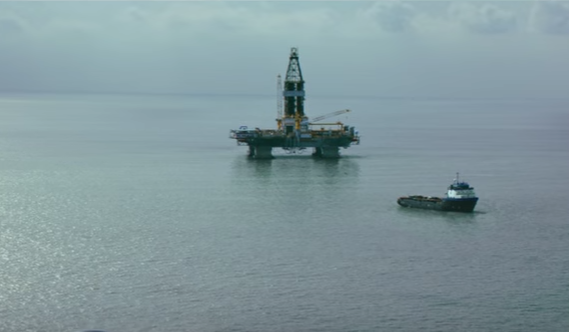 SM: Do you consider Deepwater Horizon a genre picture?

SM: Please don’t get me wrong. I am not trying to diminish the impact of the film. But taken at face value, both Sully and Deepwater Horizon qualify as disaster films, only not in the Jennings Lang, Airport '16 mold. If anything, the tragedies our nation has endured may have sparked a resurgence in this genre, or whatever you want to call it. Now the disasters are presented in a more realistic manner, with melodrama, hysteria, and illogical plotting kept to a minimum.

KR: I agree with that assessment of it. I’d like to see more of these movies being made. I remember when I did Silkwood and Backdraft. Silkwood had this enormous background involving nuclear energy, a very serious movie. But it was focused on the small lives of the people in it. With Backdraft there was this big backdrop of these enormous fires these guys were dealing with, but again it was focusing on the lives of a tradition, a type of person who in that case was a firefighter.

Deepwater Horizon does have that enormity to it. You have to be able to have the money to pull off the enormity of the size of the event. But it’s the smallness of the individuals that are involved in it that you focus on. In that regard, they are tough movies to do. They’re not sequel kinds of movies. You gotta believe in it on a high level of execution. That’s what happened with Deepwater. I’m really proud of it. It has a lot to say. It’s a big subject matter that affects all of our lives. When things go south, you realize how difficult it is, particularly when you’re trying to get oil out of the ground which is a mile underneath water. 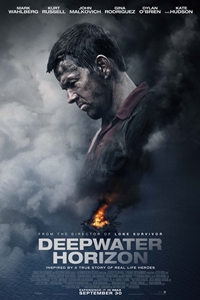 SM: Was there ever a time when it wasn’t cool to be Kurt Russell?

KR: Sure. The years with Disney were tough.

SM: Yeah, but you were their number one box office star for almost a decade.

KR: Yeah. At Disney. For people who liked the Disney stuff, that didn’t have a bias against it. [Laughing.] They were open to watching the story and having a good laugh and they enjoyed it very much. That was a time… I learned later on that there are different audiences for different movies.

SM: During your time with the studio, you averaged a picture a year, and it’s safe to say that you worked with just about every great character actor who passed through the gate. How did guys like Phil Silvers or Cesar Romero … Cesar Romero! You think you’re cool? How did these guys take to a playing opposite a 14-year-old kid who just happened to be Disney’s #1 box office star?

KR [laughing]: I did have the opportunity to work with some great actors. And I still do. I gotta say it’s always fascinating and amazing to watch somebody be able to do something so well that you just get a kick out of it while you’re doing it. It’s one of the great pleasures of being an actor.

SM: Okay. Enough with Disney. Back to Deepwater. Other than having to endure hours in the makeup chair with cosmeticians affixing fake shards of glass to your face, what was the most physically demanding part of making the picture?

KR: Always the most demanding part is capturing the proper and true feeling of the people that are going through whatever they are going through. In this case it’s a rig that is literally burning and falling apart and you’re on it, 41 miles out to sea, and nowhere to go. That’s really what Deepwater focuses on; the event itself and what happens to these people.

In that process you also begin to question accountability and did it come about. Was there anything that could have been done differently. Was there confusion? Was there miscommunication? Sometimes it brews into a perfect negative storm and that’s what happens in Deepwater Horizon. To be able to show that properly.… I was proud of Lionsgate for putting up the money they did to pull it off. The execution of it was on an extremely high level and I’m proud to be a part of that. [Laughing.] I wouldn’t look at it as a potential cult movie.

SM [laughing]: You do know that cult films and genre films are not exclusively intertwined. Like you need me to tell you!

KR: I know. They’re different things. When you’re doing The Thing, which is a genre film that eventually became a cult movie, then you mix the two.

SM: They’re calling this the worst summer for movies in decades. I’m hoping that films like Sully and Deepwater will make enough money to convince studios that while audiences will never tire of heroes, the comic book costumes are getting old. You’ve been doing this for over 50 years. I trust your insight. What do we need to make Hollywood great again or is everything moving along just fine?

KR: I think Hollywood’s pretty great right now. Our business is one where we roll the dice every time we go to work. It always depends on the movie you make. I don’t disagree with you that there’s questions of

the superhero characters having been here for awhile now and perhaps like other genres they ride their wave to a crest and then they fall off.

SM: I love the brush cut look you sport in Deepwater. If you had to pick your favorite and least favorite haircuts out of all the characters you’ve played, which would they be? 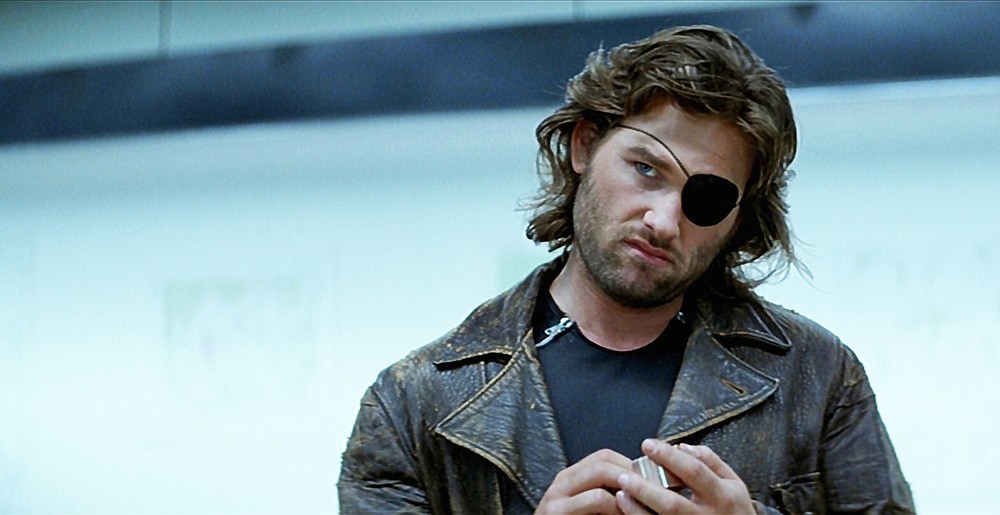 KR [laughing]: Now that’s a good question! I kinda like Snake Plissken’s extreme look. I always felt very comfortable with my hair in Backdraft. I like that short haircut that you don’t have to do anything with. Take a shower and you’re done. The look that I have in Guardians of the Galaxy is one of my favorites. It’s a full-on Moses kind of thing that really cool. I enjoyed that. 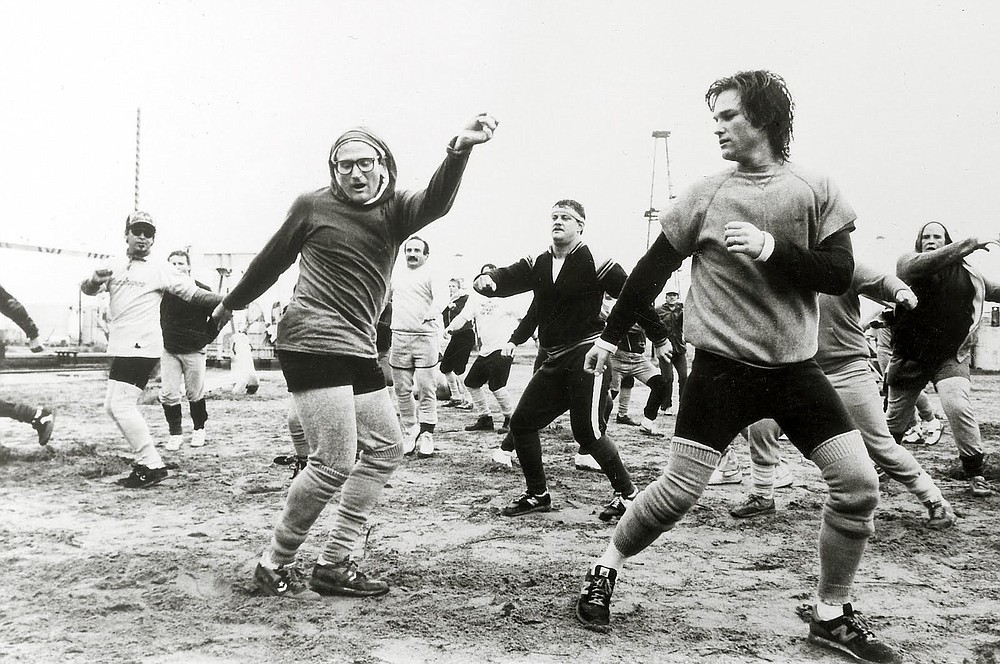 Robin Williams and Kurt Russell get ready to rewrite history in The Best of Times.

SM: If I had to pick my favorite Kurt Russell performance drumroll, it would have to be Reno Hightower in The Best of Times. There’s a fine line between mensch and jagoff that you parade with the greatest of ease.

KR [laughing]: Thanks, man! Roles like that are really fun to do. The same goes for Big Trouble in Little China. You walk a fine line between a guy who is ultimately too much of a jerk but you can never cross that line, you gotta make him a guy you can sorta hang with. And after you bond with him, you may not want to tell anybody about it the next day.

SM: Used Cars is another one. Thank you so much for spending part of your Sunday afternoon speaking with me. It was a great honor.

KR: I really appreciate that. You’re a nice guy and it was great talking to you.