Large animals in the wild 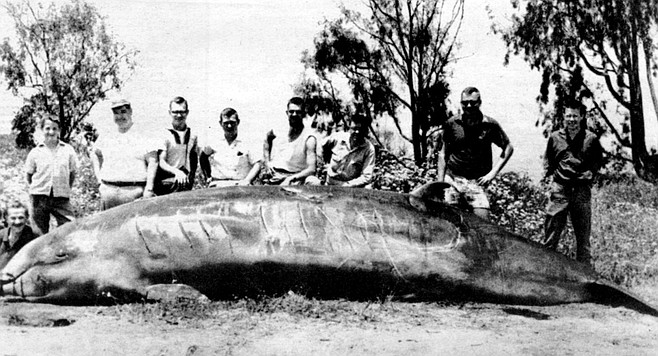 Mystery of the Beaked Whales

By the time they arrived the tide had gone out and the animal lay dead on the sand. “There was a guy from the Navy already there. He was asking the lifeguard questions, and one of the things he asked him was, ‘Did the whale make any sound before it died?’ and the lifeguard said, ‘Oh yeah, that’s one thing I forgot to tell you, it made one sound — kind of a boing sound.” 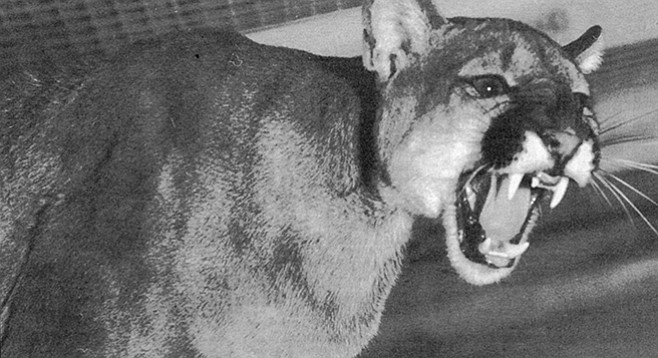 Mountain lion at Fund for Animals Wildlife Rehabilitation Center in Ramona. "The more deer, the more mountain lions. And since the deer are moving in closer to where humans live, the lions move in closer too."

"Some of this may have to do with the fact that hunting mountain lions was outlawed in 1972 In addition to there being more people in the state, people are developing areas that were once wild. They go out into rural areas and start building homes and golf courses and irrigating and planting gardens - doing things that increase the amount of food consistently available to deer, for example. Deer are a mountain lion's main food source. 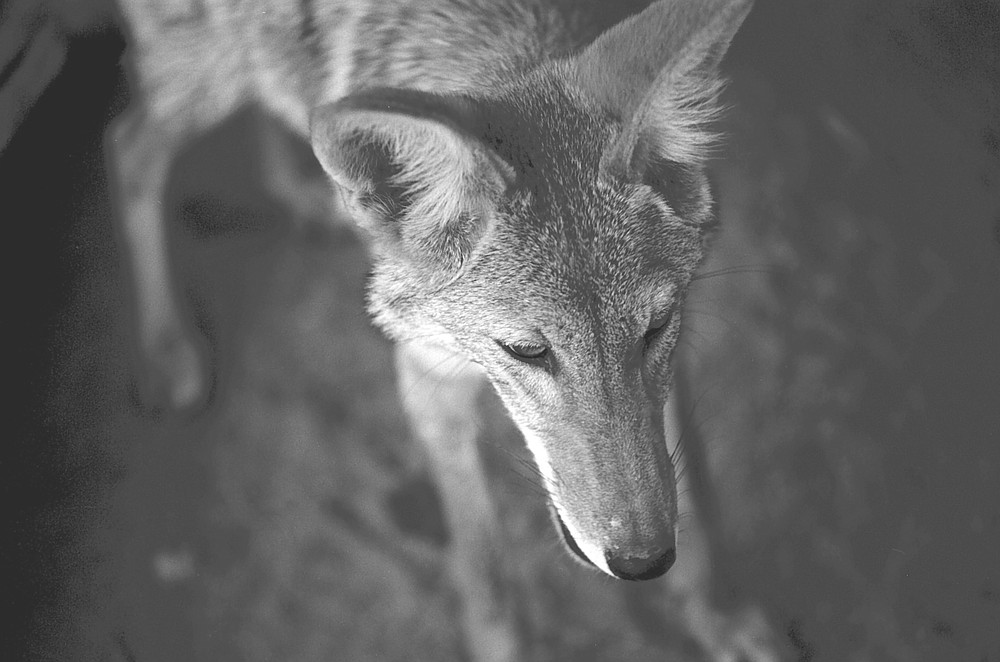 Coyote at Fund for Animals Wildlife Refuge, Ramona. "Domestic dogs are more likely to bite you than coyotes. It's safe to walk in these canyons."

Crooks sees three major threats facing the canyons. The first is cats. "Outdoor cats surrounding the typical canyon kill nearly 1000 rodents, over 500 birds, and 600 lizards per year.” Then there's the coming red fox invasion. Since fur ranchers and hunters introduced them elsewhere in California, they're spreading south. And the third invader? "Ice plant," says Crooks. Ice plant invades down the slope, grows over the native habitat, and kills it. 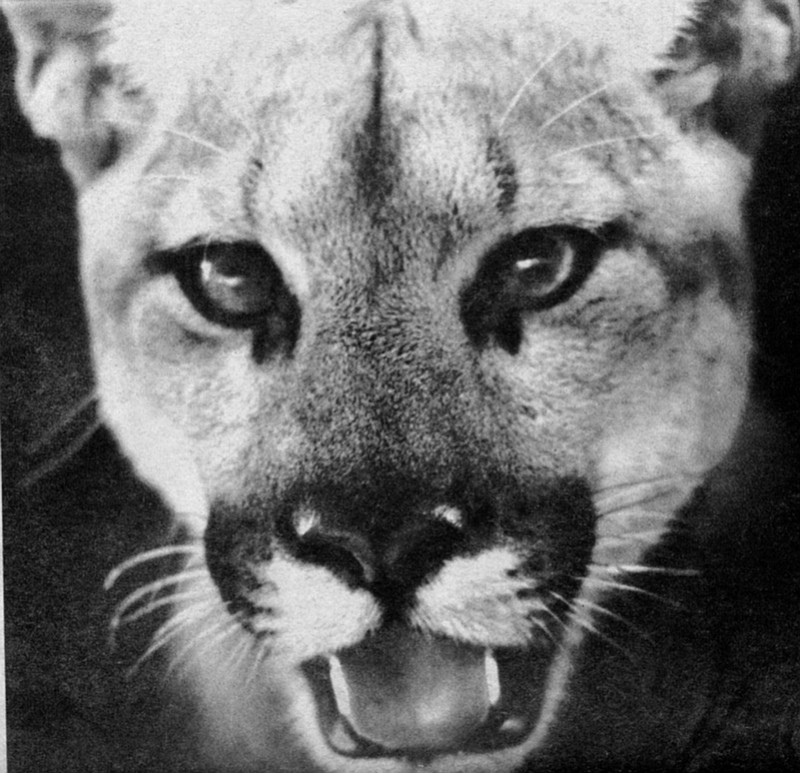 Return of the Mountain Lion

In October 1983, a lion killed a domestic goat at a ranch near Julian; in November 1983, a dead lion cub was found on the road near Santa Ysabel. In January 1984, at the Christian Conference Center near Mount Palomar, a lion killed 20 goats. That same month, a lion was accidentally caught in, and later released from, a coyote trap near Mesa Grande. In April 1984, an adult lion was killed by a car near Lake Henshaw. 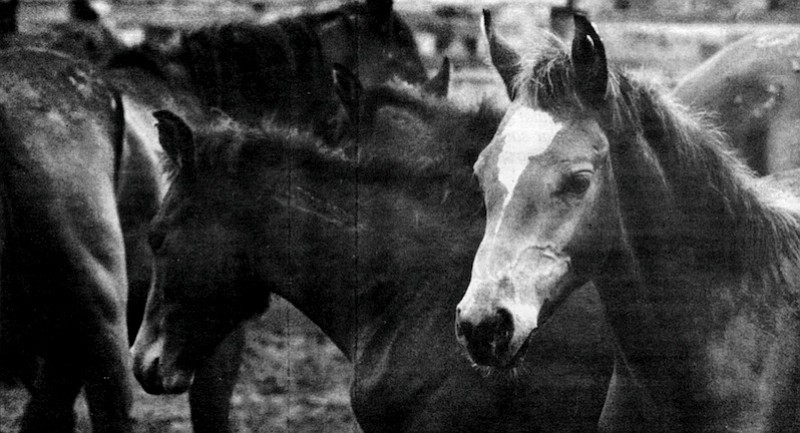 In the spring of 1986, BLM estimated there were forty horses living in the northern portion of Anza-Borrego, in the three tributary canyons of Coyote Creek: Horse Canyon, Nance Canyon, and Tule Canyon.

The Wild Horses of Coyote Creek

I was the only human in the canyon that night — probably the only human for ten miles in any direction. Before dark I walked in a circle on the canyon floor and found fresh, barefoot (unshod) horse tracks. There were also the tracks of wild cows, and later, when the moon rose over the Santa Rosa Mountains, I heard one of them bawling up Tule Creek. It was a forlorn song that lonely cow sang. 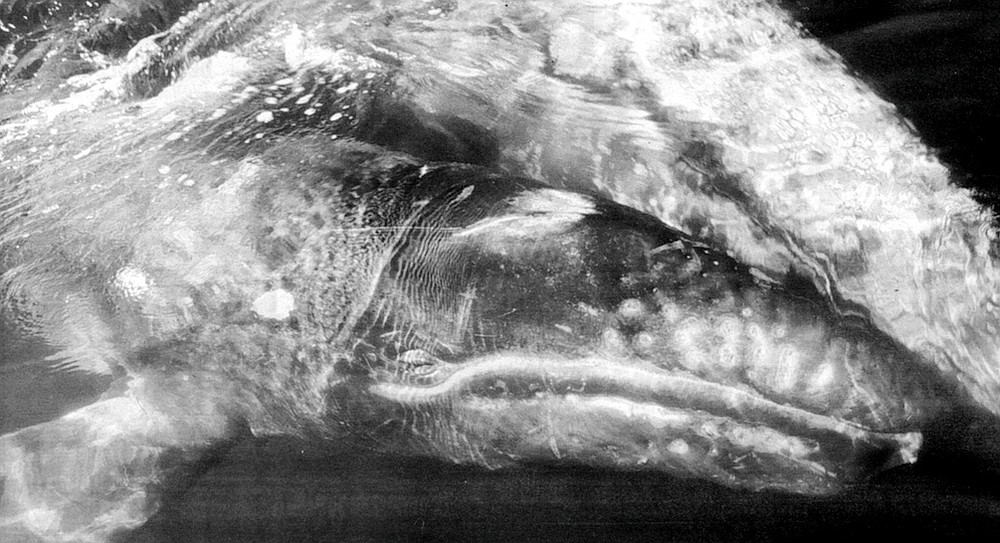 Gray whale cow and calf. “I’ve watched cow-calf pairs when there are killer whales around, and they get right up in the rocks. They stop swimming. It’s obvious they’re hiding."

A Whiff of Whale Breath

For a dozen years after gray whales were first attacked in Magdalena Bay, they did find refuge in the large lagoons along the Baja coast. These lagoons were hidden from view, but in the winter of 1857-58, a sea captain from Maine who’d been lured to California by the gold rush figured out how to make his way into one of them. The name of Charles Scammon still designates that body of water on many maps.