Sandag members checking phones, whispering to each other 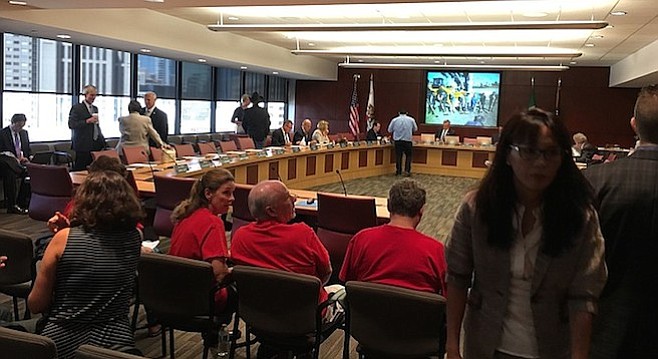 On September 9, the Sandag board voted to take a high-profile corner lot, directly above Mission Bay Park and off the I-5, by eminent domain. The former shopping center on Clairemont Drive between Morena Boulevard and Denver Street was built in the 1950s and has been blighted for about a decade with only a hotel remaining in operation onsite.

Sandag Board of Directors Meeting Minutes

Sandag (San Diego Association of Governments) plans to build a park-and-ride on this site for the new Mid-Coast Trolley set to break ground in October. After appeals by residents that overwhelmingly opposed Sandag’s plans and instead supported Protea Properties' mixed-use proposal — the board went behind closed doors to vote — but not before Sandag chair Ron Roberts commented on how unusual it was to have so much public testimony prior to a closed door session.

James LaMattery, spokesperson of the grassroots organization Raise the Balloon, said he was shocked by the vote. Raise the Balloon was formed in 2014 to oppose a zoning change that would have allowed a 60-foot-high condo project on Morena Boulevard.

“Protea had worked out everything with Sandag prior to the vote — the 158 subterranean parking spaces, the power station, and the off-street bus stop. Since the board voted in closed session, it’s hard to speculate why the decision was made to seize the property. The only answer we've gotten out of Councilmember Zapf's office is that the insidious decision to seize was political."

Besides residents, Jeffrey Essakow (president of Protea) and local developer Bruce Kleege testified at the Sandag meeting. LaMattery said that he anticipated that Kleege would speak out against eminent domain and was taken by surprise when he instead supported the move. Kleege owns the Best Western Hotel on the lot in question (purchased in 2011). Kleege also purchased a shopping center up the hill in 2012 that he intends to redevelop to include condominiums with a proposed height variance of 57 feet (Clairemont Village).

Kleege testified that he wanted eminent domain to proceed so that the lot development could be opened up to other proposals besides Protea’s.

LaMattery said that Protea has decided to challenge the eminent domain by moving forward with the purchase of the lot and trying to transfer title before Sandag completes their seizure. LaMattery also said that Sandag was in the process of eminent domain with the owners prior to Protea being in the picture.

David Potter, a Bay Park resident and urban planner with more than 40 years of experience, said, “According to a preeminent legal expert on eminent domain, Sandag should have control of the property by the end of the year. The value of the land, however, may not be settled until sometime later and possibly in court.”

Potter questioned why Protea had not reached out to the Clairemont planning group or the Morena Corridor subcommittee, currently developing a plan that includes this lot. Potter, former chair of the planning group and a member of the subcommittee, said he considers the lack of transparency to be extremely bothersome.

I asked Helen Gao of Sandag what the deciding factor was in seizing the property and if they were getting something from eminent domain that wasn’t possible with Protea. Gao declined to comment due to ongoing negotiations. She did confirm that mixed-use development of the site is still on the table and that Sandag met with Kleege about the development of the lot as part of their public outreach to adjacent property owners.

Once the acquisition process is complete, Gao said that Sandag will own the property until the project is complete and operational and then it will be turned over to the Metropolitan Transit System.

George Henderson is an engineer that has resided in Bay Ho since 1990. “Sandag just lacks imagination. The reality is that even though I’m excited to have a trolley station nearby, I live on a steep hill so I’ll have to take a $5 Uber to get to the trolley. The park and ride is only going to have 158 spaces. What’s going to happen is parking will spill over into residential streets. It will be like the Old Town station that is a victim of its own success and its own success is causing its failure.”

Henderson testified at the Sandag meeting before the eminent domain vote. “My main comments were about capacity and planning for success. I also asked them to pull back for a few weeks and really think about it and come up with something better than just an ugly parking lot. While I was talking, Sandag board members were on their cells, checking messages, whispering to each other, running off to the back and talking to each other — they weren’t listening to the community.”

Henderson attended the September 20 Clairemont planning group meeting where Sandag made a presentation about the latest on the Mid-Coast trolley project. “They said the trolley extension will add 21,000 daily boardings. When Sandag said they were committed to working with the community, a planning member questioned their sincerity, since even though the community asked Sandag to delay eminent domain proceedings, they voted to move forward behind closed doors.”

Raise the Balloon has a big event planned for October 1 at the vacant lot. “The community will have a chance to talk with Essakow [Protea] and show Sandag that we won’t allow them to ignore the will of the community,” said LaMattery.

Typical of officious politicos to not give a hoot about what some local or neighborhood planning group thinks. Most city councils, county supervisors, etc. have little use for the public comment portion of the meeting as the decisions have already been made behind the scenes. The public and planning groups are just bothersome flies on the ass of an elephant.

SANDAG is just too big and should be broken up. They have had ample time to complete the regional rail system and they have failed. The coaster and surf-liner should have had at least 4 stops between Old Town and Sorrento Valley by now. The new blue line runs next to the surf-liner and coaster. It is; redundant, parallel, separate and expensive. SANDAG is simply too wasteful with our taxpayer dollars and should not receive approval in November. A fraction of the money allocated for the blue line extension could have been directed to surf-liner coaster stations their parking garage structures and minimizing the use of imminent domain. This same issue was a sore on the blue line Tecolote station as well, I was present at the SANDAG meeting when their attorney boasted on how he had fooled the owner of the Tecolote property, a chill went through the audience. Here in University I have been trying to get the answer as to why SANDAG jogged these tracks in Rose Canyon, see photo. There is an article in the September Clairemont Times.