Judy Davis is a stitch as The Dressmaker's mad mom 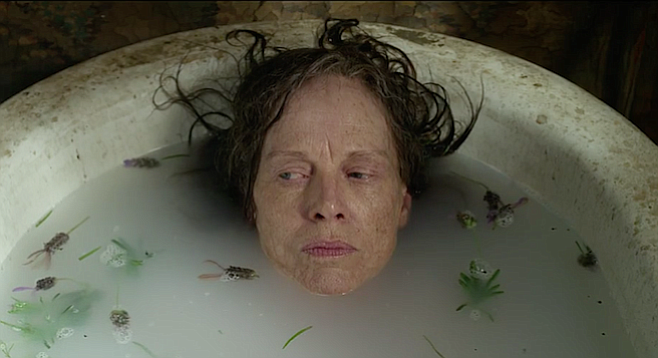 Judy Davis had a bad cold, her normally husky voice pitched a few octaves lower. After a couple of postnasal one-word answers, the interview appeared destined to be the shortest on record.

One mention of her latest film, The Dressmaker, and the phlegm lifted.

The dark-comedy period fable features Davis as Kate Winslet’s mentally defective (or so it would seem) mother, a character so daft, the townsfolk can’t call her “Molly” without using the word “Mad” as a lead-in. It’s the juiciest role she’s had in years and one that’s already generating Oscar buzz. 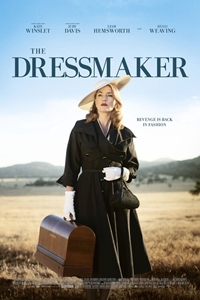 Scott Marks: It’s remarkable how well The Dressmaker plays off your last feature, The Young and Prodigious T.S. Spivet. Here are two period pictures that offer up unique surreal landscapes and give you the opportunity to play a pair of juicy, downright nasty mother figures. Coincidence, or does one detect a pattern?

Judy Davis [laughing]: You know, the Spivet film… I haven’t seen that film. I came in at the last hour because Kathy Bates fell ill. Kathy Bates was going to play that role. I was the savior of a desperate situation, I think. So I can’t actually … it was a wonderful script, actually, that Spivet script. But having never seen the film, I don’t know how it turned out.

To answer your question [laughing], I know it’s your job to draw those sort of analogies, but no connection like that has ever occurred to me.

SM: I don’t want to know anything about a movie before…

JD: You’re right! Hang on. You’re right because The Dressmaker is a fantasy. It’s like a fable. It’s not a slice of naturalism. It’s good that you point that out because that’s really the way to view it.

SM: I don’t want to know anything about a movie before going in other than who is involved in the production, so I generally check the technical specs on IMBD. For some reason that probably had something to do with the website listing it as a drama, I was half expecting something along the lines of the Albert Finney film, The Dresser, which, though brilliantly acted, is a bit of a stage-bound bore. The film eventually reveals a serious side, but for over half the running time the laughs came at a steady pace.

JD: I don’t think drama is the word that best describes the film. I’d call it a dark comic fable. It has comedy, but it’s black. I mean, one of these women cuts the Achilles tendon of her ghastly fornicating husband. [Laughing.]

SM: Jocelyn Moorehouse and her husband, P.J. Hogan, collaborated on the screenplay. Hogan’s My Best Friend’s Wedding earned him a place in my heart as the architect of “chick flicks.” Both are very talented directors, but only one received credit. How do this husband and wife team coexist onset?

JD: P.J. wasn’t on the main set. He very kindly … I’m not sure he actually got paid. He was the second unit director. It was very complex, all the stuff with the townspeople, a lot of that stuff he shot. He had to. The script was so dense, Jocelyn never could have gotten through it all on the main shoot. He was sort of down the hill filming the townsfolk stuff and we were up the hill doing the family scenes.

SM: To me, Mad Molly is at her maddest when talking back to the screen during a presentation of Sunset Boulevard. Do you still make regular visits to the cinema and, if so, have you ever told anyone to turn off their damn cellphone?

JD [laughing]: Do I still make regular visits to the cinema? What do you think I am? A hermit?

SM: I don’t know. A lot of people no longer make the effort, what with the advent of home theaters.

JD: Of course I still go to the flicks! It’s good to get a chocolate-coated ice cream. And it’s good to see movies with an audience and hear how they respond. Generally I find audiences very generous. Much more than me. I tend to be critical. So, yes I love going to the pictures, but I refrain from shouting at the screen.

SM: It’s good when you don’t stay in character.

JD: Mind you, the first David Cronenberg film I saw ... the one with Jeremy Irons as the twin gynecologists. What was it called?

JD: Thank you. I was pregnant when I saw that film and I did leave when she was giving birth to the maggots. I thought, “Oh, come on!” That might have been a noisy exit.

SM: After that you still agreed to work with him on Naked Lunch?

JD: It’s weird, isn’t it. But Cronenberg is very seductive. He persuaded me that it was the most fantastic project that one could be involved in. And it was. He had always planned to film in Morocco, which I thought would have been wonderful. But the Gulf War broke out and it became impossible because you couldn’t put reels of film on planes. Everything had to be opened and checked. So, instead of Morocco, we shot it in a studio in Toronto. The film changed dramatically because of that. It’s still good, but different.

SM: The Dressmaker is the first of this year’s films to arrive with Oscar buzz. You’ve received two nominations in the past, so it’s clear that you’re on the Academy’s good side. Correct me if I’m wrong, but you don’t impress me as the type who feels comfortable with all this awards stuff.

JD: It’s wonderful to get that kind of affirmation. When an actor gets an award or a nomination, I think those things are an acknowledgement of a lot of people’s work. When an actor’s on the screen, they represent a collaboration. What I’m not good at are awards ceremonies, and dressing up, and those stupid red carpet things. I can’t really pull that off.