The awkward and dangerous Tourmaline crosswalk 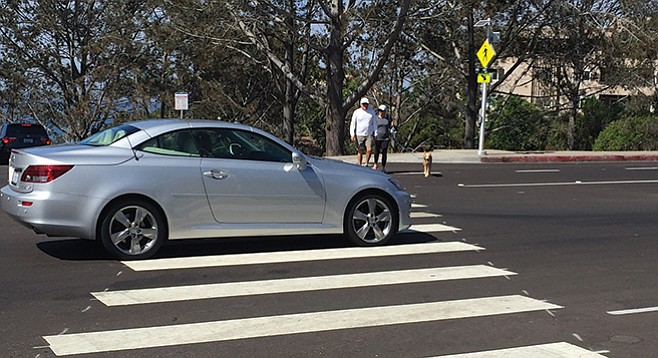 A couple of years ago the city put in a crosswalk at the entrance to the parking lot at Tourmaline Surfing Park. That is at the intersection of La Jolla Boulevard and Tourmaline Street.

When the crosswalk was first installed there were no flashing lights. Many cars did not even notice it was there until they were halfway through it. The city then installed poles on each side of the street with flashing lights. It is difficult for a surfer with a long surfboard to push the button. The pedestrian has to walk out of the way several feet to push it, and most of them do not waste the time to do that. The second problem is that even when the lights are flashing, many drivers do not realize they are for the crosswalk. Cars speed around pedestrians in the crosswalk.

Map of the intersection

Garrett, 29, lives in an apartment located at the intersection. “The poles are in the wrong place; you have to walk out of the crosswalk to push the button. And there are lots of blind spots because of the hill at Tourmaline.” Another Pacific Beach resident, Spence, 28: “People driving aren’t paying attention. I’ve seen mothers pushing baby carriages having close calls. It’s crazy.”

The La Jolla Light reported in an August 3rd article that the city will be installing a DecoBike rack at Tourmaline and La Jolla Boulevard.

The more markings and flashing lights you put the less the pedestrians pay attention. The only solution is signal lights and then the pedestrian needs to be vigilant.

Check out the crossing markings across first avenue in Coronado, at the landing. They are aggressive, but no one fails to see them.