The advantage of IB’s pollution 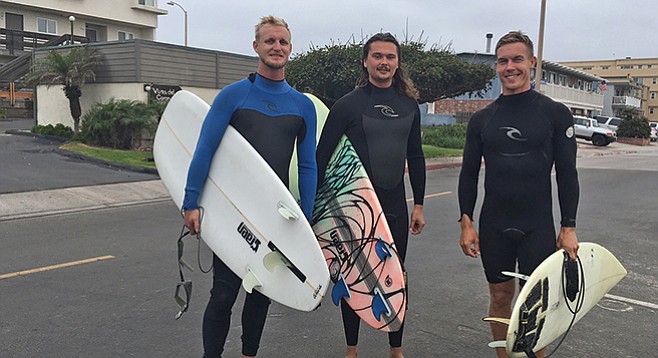 Mikial Tolmosoff, a visual artist, and Justin Mendhan, construction worker, both 28, have been riding waves together in Imperial Beach since they were 10 years old.

“My dad moved to Imperial Beach because of the surf. You can actually see the house I grew up in from here,” Tolmosoff says, craning his neck.

The pair met Walter Graen when they were 21 and since then, the trio has been surfing together in Imperial Beach and throughout Baja California.

“We surf every other day or so,” Tolmosoff estimates

“A lot of the surfers that live in Imperial Beach are here to surf and to travel to Baja to surf,” explains Tolmosoff of the I.B. surf scene.

“I stay there half the time and here the rest of the time,” explains Tolmosoff.

The Tijuana Slough is known for its massive break. Coupled with a rocky reef and heavy pollution from the Tijuana River, it can be dangerous and during the winter months it’s often closed due to pollution.

“I have had some injuries out here. Whenever I hit my head, that’s not cool. There is an art form to falling, so luckily I haven’t done that a lot,” says Tolmosoff.

“I have been surfing here since I as a kid, so I have built up my immunity, but I still get sick,” says Mendhan of the pollution.

“Some spots in San Diego are great for surfing but they are just too packed. I mean, when there are 100 guys out at Swamis it’s not so fun,” Mendhan says.

As for their boards, Graen is a shaper so he keeps the group supplied.“We get boards when he is feeling generous,” laughs Mendhan.

“I sponsor them,” Graen adds. His company, Graen Surf and Paddle is based out of La Paz, Mexico.