Contents of the Reader: Discuss

Not sure if your article was placed to generate letters to the editor or to remind me to take my blood pressure medicine. 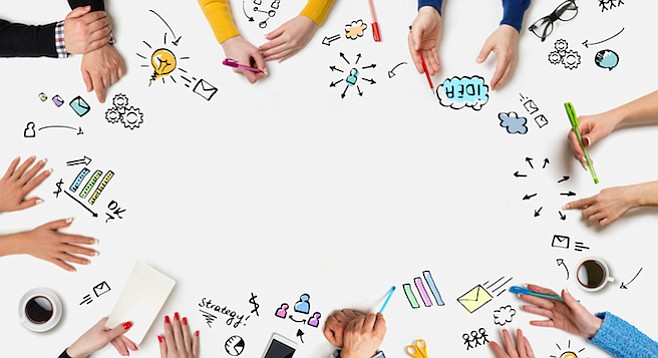 Overall, I enjoyed the article, “Burgers” (September 15 cover story). But, wow, a list of the burgers of San Diego and no mention of Canada Steakburger in lovely City Heights? It’s worth the trip for the fries alone. Then add the juicy burgers, the fresh toppings, and the affordable prices. Amazing!

I moved away from California for years, and when I came in they instantly remembered me. You can’t put a price on that level of warm customer service.

P..S. Did I mention the fries?

Your burger article appeared to be a somewhat thorough piece on where one might find a hamburger in town. My suggestion for a follow-up story might be titled “Be Kind to Animals, Don’t Eat Them.”

Dying to be Ticketed

Sheila Pell makes the same journalistic mistake as have reporters for KFMB, the U-T, and countless others, printing NCTD’s statistics as “facts” (“Ticketed on the Train Tracks”). Please do some research on the numbers of deaths related to the tracks. I’m sure you’d find the vast majority are suicides or substance abuse-related.

And if you’re going to dredge up the tragic Lou Terrell story, use the one fact that’s always omitted. He was walking with an unleashed dog. When it bolted, he had no way to control it.

The NCTD trots out their statistics and completely ignores the fact that tickets will do nothing to improve them. Someone intent on suicide is not too concerned about fines.

I read the article about plastic in the ocean and how Surfrider is holding discussions about it.

I went to Mission Beach on Sunday and Surfrider was giving out plastic containers to smokers.

I notice that all the Trump haters live in, like, Carmel Valley, Del Mar, Encinitas ... and all the people who deal with reality live where I live. It must be nice to be rich and have that kind of opportunity to espouse the whole global-warming thing, and that we should all ride bikes (“Stop the Irrational Bike Bias,” August 25 cover).

When you deal with the harsh reality down here in the hood, it’s a different story.

Not sure if your article, “Stop the Irrational Bike Bias” was placed to generate letters to the editor or to remind me to take my blood pressure medicine.

I am one of those with a bike bias with very rational tendencies. Is it irrational to think we should all be improving the public’s health, safety and welfare? My top ten rational points:

2) Our Transnet sales tax pays for a very large part of our local transportation, and as a cyclist and pedestrian, I pay this tax every time I buy something.

3) Most bike improvements do not take away vehicular capacity; they add to it by providing for other modes.

4) Widening roadways in areas like downtown is unfeasible, so why not add mobility capacity while preserving vehicular capacity?;

7) Shouldn’t safety of the public be an important priority, especially pedestrians and cyclists that are the most vulnerable?

8) Although most Americans may prefer vehicular mobility, not all do, nor should be made to.

9) The one percent discussed represents those that only use bikes for commuting to work, using a census method that keeps that number way down by asking only for the primary method of commuting to work and asking this in the middle of winter.

10) No one is going to take away a car-centric person’s right to drive; this is all about providing a choice to those that care about personal health, affordable transportation, sustainable energy use, lowered street congestion and, most of all, improved air quality and making a difference in preventing some climate change.

I won’t comment on the article’s many inaccuracies, such as the perception that changing from four lanes to three lanes creates congestion. It has been shown many times over that this reconfiguration has similar throughput since left turns are removed from conflict.

Journalism is supposed to provide multiple sides to every story. I have not seen such a one-sided article in many years, one that has not checked its sources or provided more than a negative opinion that is irrational at best.

I’m responding to Mr. Muga, who invited me to speak at their 9/11 event (Letters, August 25, “Invitation to Explain”).

I’d love to speak at your event. I charge $250,000 for 20 minutes. I will be voting for Hillary this year. If you want to get back to me, just go to the Clinton Foundation and leave a message. I’ll get back to you.

Does Well in Photo Opps

Kristin Gaspar’s taciturn refusal to allow Encinitas residents an opportunity to assess who to vote for, in the opinion of many, accurately reflects a cowardliness and a disregard for her constituency. She has been an ineffective mayor in her term here, though does outstandingly well in photo opps — never met one she didn’t like.

Her handler, Jason Roe, can almost be seen smirking at Encinitans in his highly disingenuous remarks about her schedule not allowing this! What could possibly be more important? A Rotary breakfast downtown? Heart surgery scheduling?

I call bull! I call Gaspar’s cowardice as sitting on a presumed lead, now that mayor Sam Abed of Escondido is out of the race. Has anyone noticed that Gaspar does not speak to this issue at all?

Gaspar is showing us what she’s made of right now, Encinitans. Her arrogance here is an amazing display of both chutzpah and disrespect to Encinitas citizens and to the election process. Know what you’re voting for, folks. Don’t be fooled by the imagery here. Look at the political integrity not happening here. Here’s a photo opp Gaspar wants no part of.

Stuck in the Middle

I don’t see an answer in this article (“Gripes over Clairemont’s New Bike-Lane Barriers”) regarding how the city plans to address the concerns about not having a shoulder on the side of the road so cars can pull over to the side in case of car trouble or emergency vehicles.