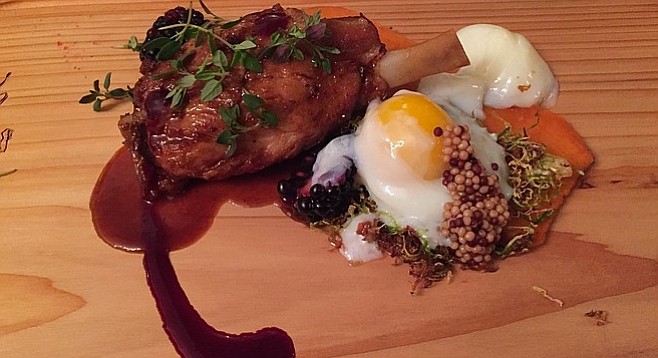 On the rare occasion David and I make a trek to Carlsbad, it’s usually to go to the European restaurant and store Tip Top Meats (primarily for products by the Hungarian brand, Bende, which is the only sausage and bacon David uses when he cooks). But we recently discovered another reason to make the drive, and it’s located right across the street from Tip Top: Green Dragon Tavern & Museum.

I knew nothing of the place when I walked through the doors of the expansive building (22,000 sq. ft), only that it was where we’d be enjoying a cocktail-paired multi-course meal featuring locally distilled Henebery Whiskey. It was during a recent visit to Sausage and Meat that David and I discovered Henebery, a family-owned-and operated distillery currently creating a rye based on an ancestor’s recipe from the 1800s. Their new distillery and tasting room in Vista should be open to the public before year’s end. After gushing over the smoothness and sweet-but-not-cloying notes of the precious liquid, a fellow bar-goer at S&M told us about the upcoming tasting and we quickly secured our seats at the table.

Standing in the exhibition room, I was still unsure as to what the “museum” part of Green Dragon Tavern & Museum was about. The guy assembling our welcome cocktail explained that it’s all about American history, composed of documents and artifacts from our Founding Fathers who met regularly at the original Green Dragon Tavern in Boston in the 1700s. The old pub was home to the Sons of Liberty and nicknamed the Headquarters of the Revolution by historians, as that is where major historical events, including the Boston Tea Party, were planned.

It was surreal for David, who is from Boston, to see so much of his hometown’s history here in SoCal. Apparently the collection was amassed by one man, who is referred to as the family-owned venue’s “benefactor.” Perusing the glass cases with a drink in hand, I got to see John Hancock’s John Hancock on an ancient lottery ticket, along with letters penned by Sam Adams and Benjamin Franklin. As our host for the evening would later remark, the Green Dragon Tavern & Museum is perhaps the only place where you can see an actual Sam Adams signature while drinking a Sam Adams beer. It’s a fascinating and beautifully designed exhibit, and the fact that its existence was a surprise made it that much more delightful.

After pass-arounds (a refreshing chickpea and feta salad served on a spoon, a puff pastry bite with gorgonzola cream and a hunk of braised oxtail) and that welcome drink, we were invited to a private dining room containing two long tables seating our party of 60. In addition to the museum and dining room, there’s also an open two-story tavern modeled on the original and another public dining room. The kitchen here focuses on a “historical dining experience,” by which I assume they mean they derive inspiration from menus of America yore. The regular menu includes New England–centric fare such as New England style clam chowder and Maine lobster rolls, along with colonial dishes like Shepherd’s Pie and Scottish salmon.

Our dinner did not include any items on the regular menu, but after glancing at it I’m eager to return and try a few specific items from the extensive selection. For us, the menu was fixed and prepared especially to pair with the cocktails. We began with a grilled peach salad (grilled peaches, Great Hill blue cheese, pork lardon, Riesling Vinaigrette, baby arugula, and watercress). I imagine the kitchen had been hectic because our greens were more like stems, but the classic combination of the sweet peach and sharp blue cheese was a crowd-pleaser.

I’m not a fan of foie gras; it’s a texture thing. But even though I gave the seared foie gras on my plate to David I did enjoy the savory cherry cabernet reduction and toasted hazelnuts with a brioche crouton.

The striped bass — served atop a tomato and basil sauce, Israeli couscous, and squash — tasted of a fresh summer garden by the ocean. The fish was perfectly cooked, flaky and moist, and the flavors of sweet, ripe tomato, and herby basil shined through in the sauces.

For a tasting dinner, the portions were oversized. But even though everyone around me complained about their fast-filling bellies, I noticed they were still eating. Next up, and where I slowed down, was the braised pork shank, served on a plank with a thin, soft slice of sweet potato, pickled mustard seed, crispy brussels sprouts (which added a nice salty crunch), a perfect egg, and blackberry ginger demi-sauce. The meat was lean and came easily off the bone. Including a dab of each of the pork’s accompaniments in one bite was an exercise in balanced satisfaction.

Our five cocktails with five courses was more like seven (we had that greeting cocktail back in the museum). We were given a straight pour as a baseline, along with a dense and delicious scone, prior to the peaches, our official first course. The straight pour was my favorite.

The guys at Henebery were not part of creating the cocktails this evening, and that seemed evident. This rye, with all its natural depth, begs to be served simply — either straight, with some ice, or in a Manhattan or Old-Fashioned. The bar failed by overdoing it, adding vinegar to one (which I actually liked, but when people learned “shrubs” meant “vinegar,” there were lots of pinched noses), a lot of bitters to another, with the overall error of too much cloying sweetness. The flavor of the whiskey was too often eclipsed by the tyrannical taste of syrup or bitters. The food was exquisite, but the mixology was off. The same happened when I first tasted it at Sausage and Meat — their cocktail featuring this rye was not nearly as good as sipping the stuff straight.

In line with everything else set before us, dessert did not disappoint. The plum/apple crisp with salted caramel gelato and toasted almond crumble made us wish we weren’t so full.

Here’s my takeaway: Go see this museum. It’s cool, and you’ll learn something interesting. Try Henebery Whiskey, but get it neat first, and then go from there according to your own taste. Trust your tongue. And based on what I tasted from their chef and the look of the menu, get thee to the dining room at Green Dragon Tavern & Museum. 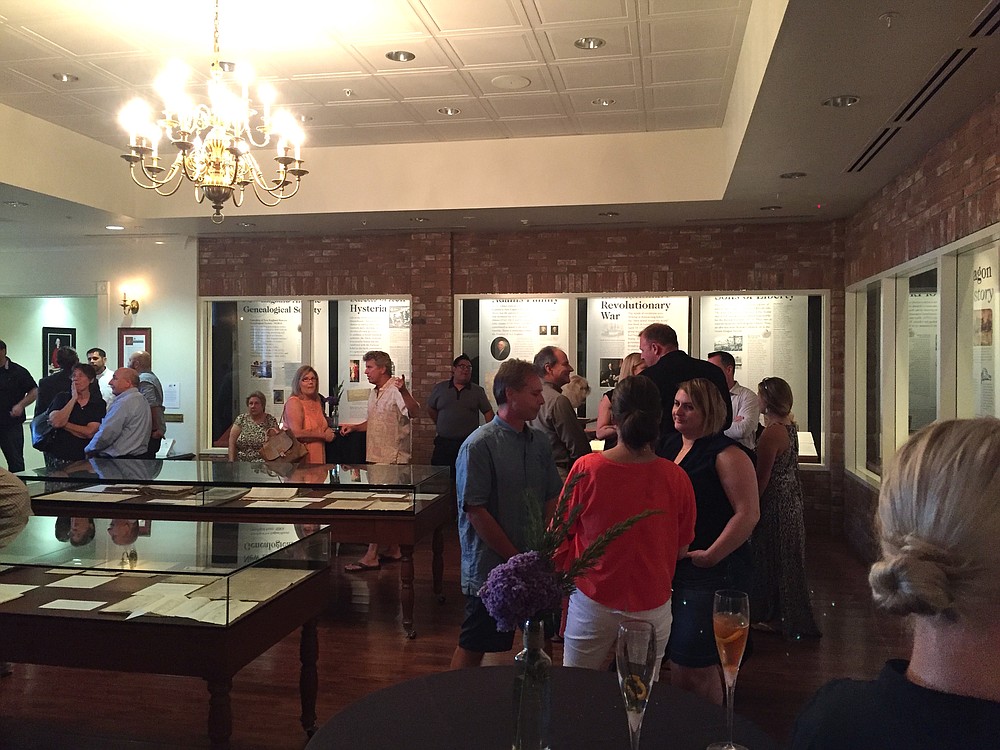 Mingling before dinner in the Green Dragon Tavern Museum 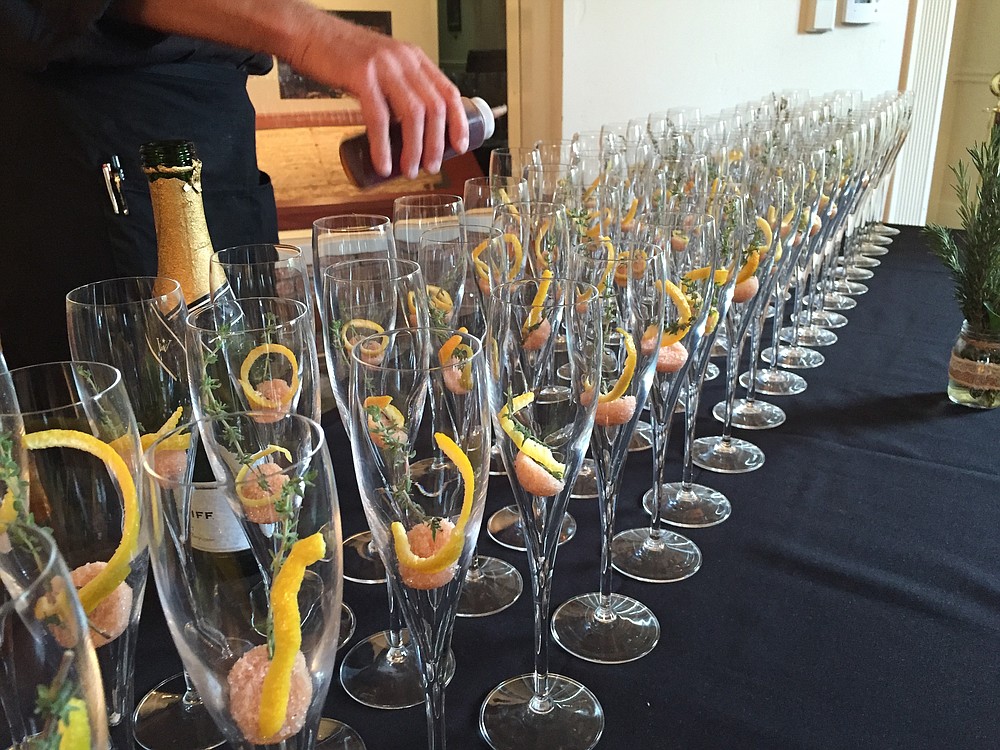 Greeting cocktails being prepped and poured 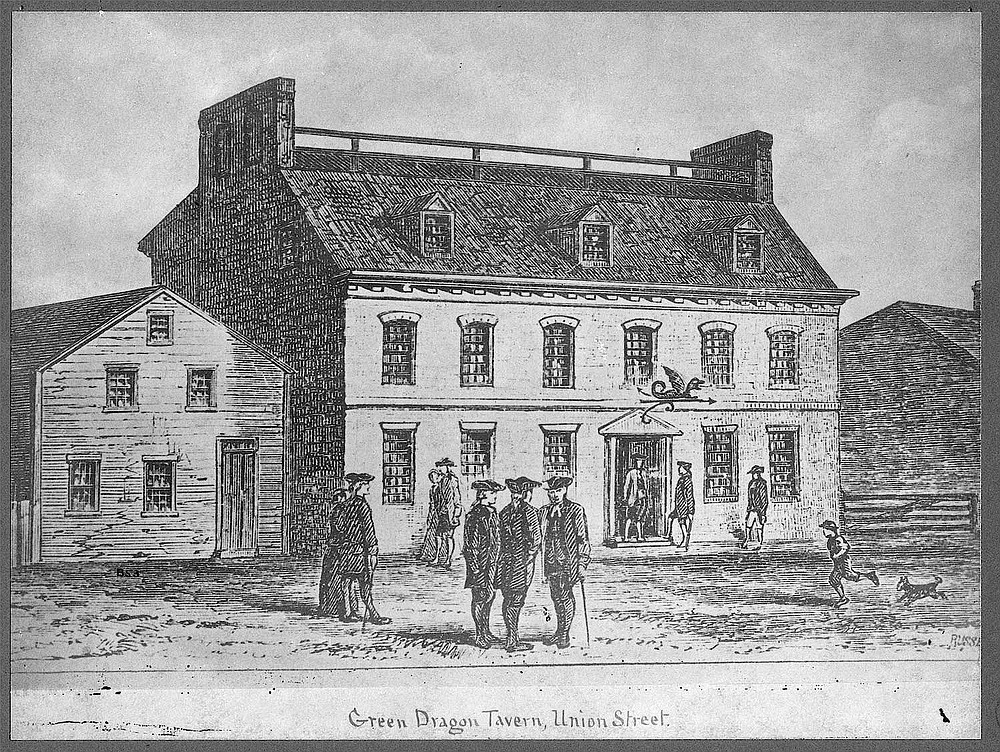 Sketch of the original Green Dragon Tavern in Boston 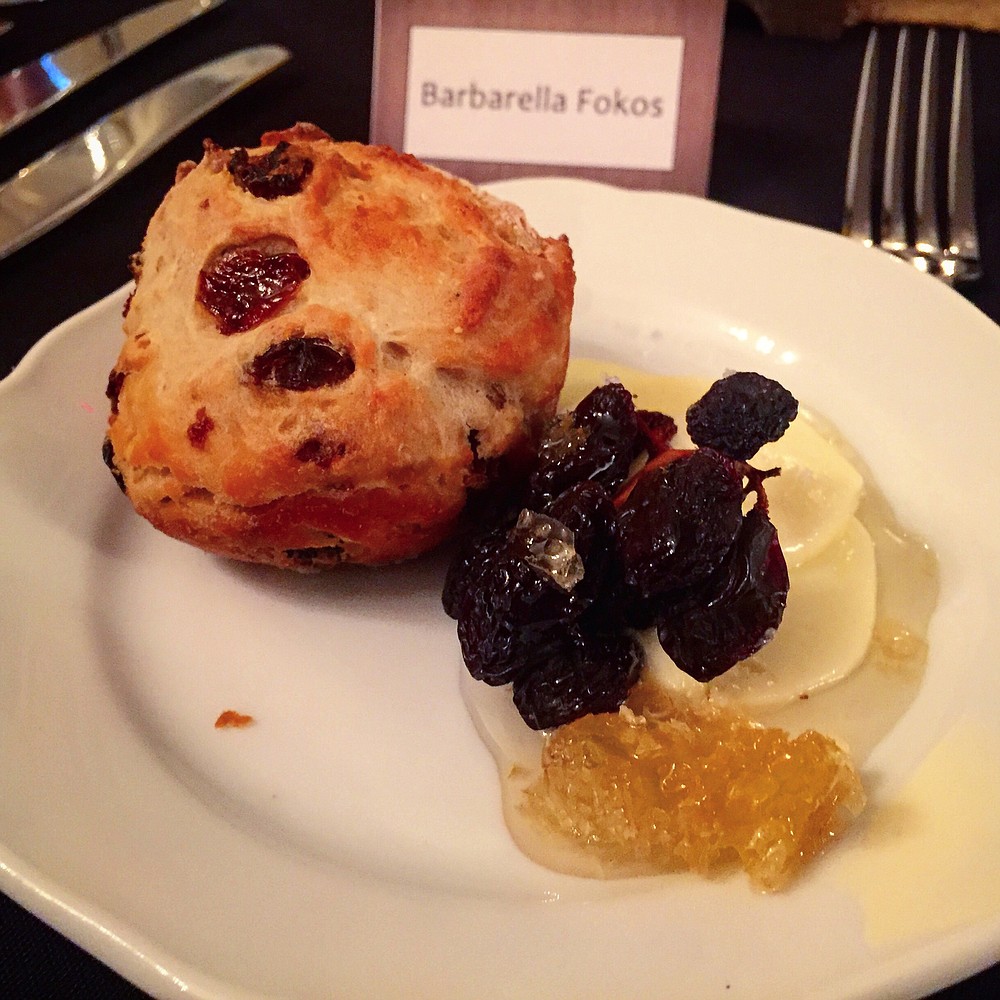 A dense and flavorful scone, served with dried plums, honey, and butter, all meant to bring out the notes in the whiskey 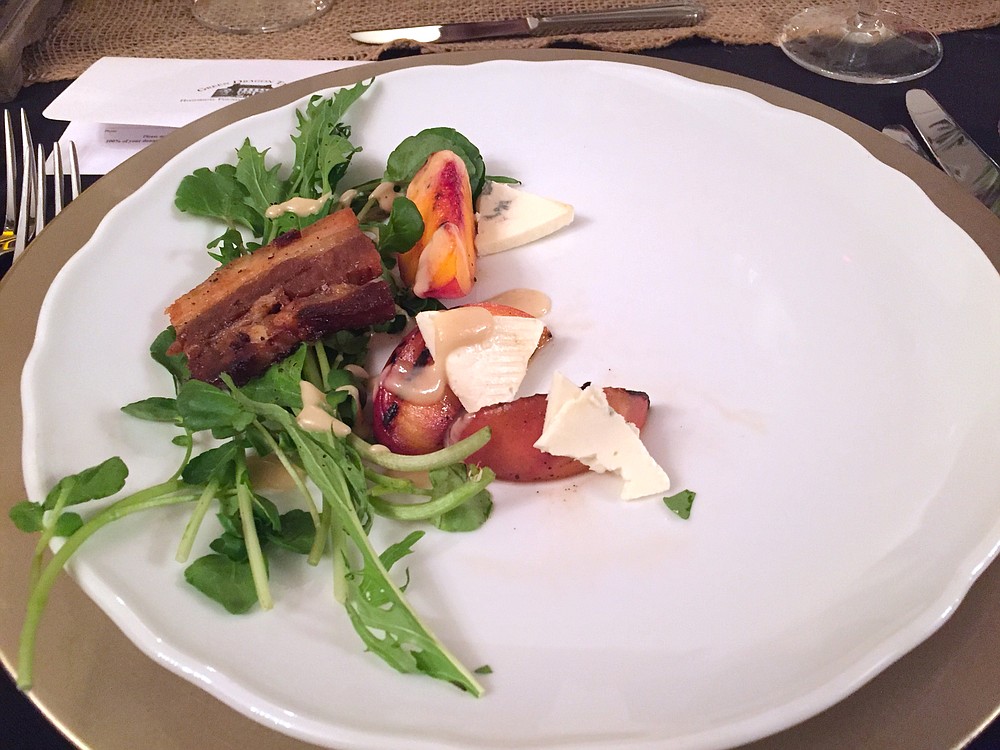 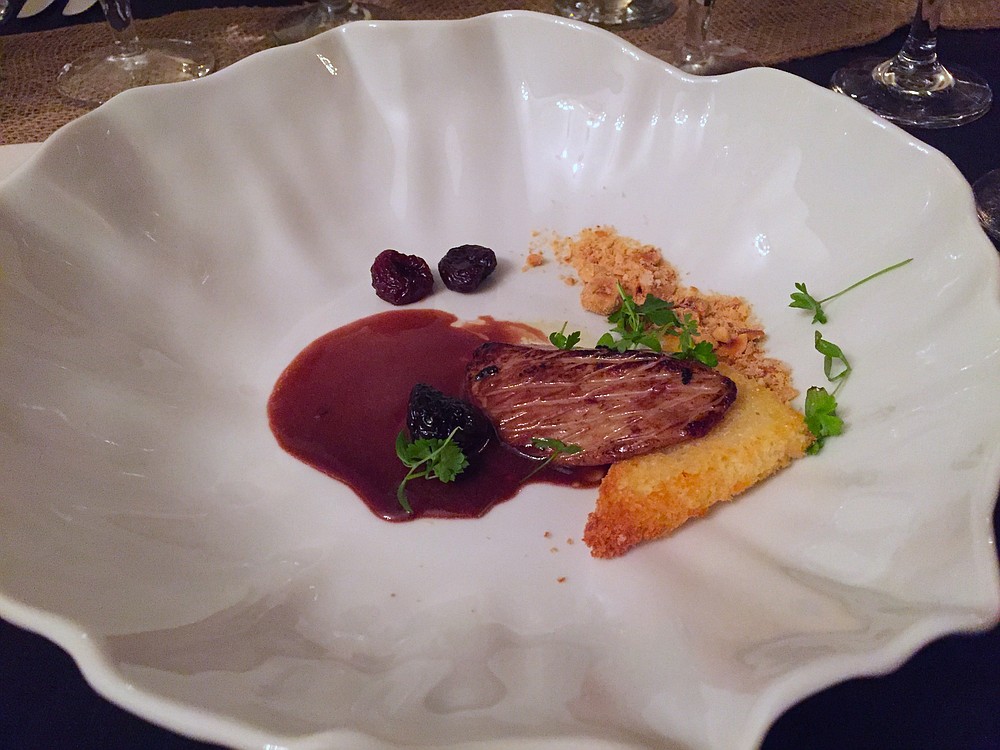 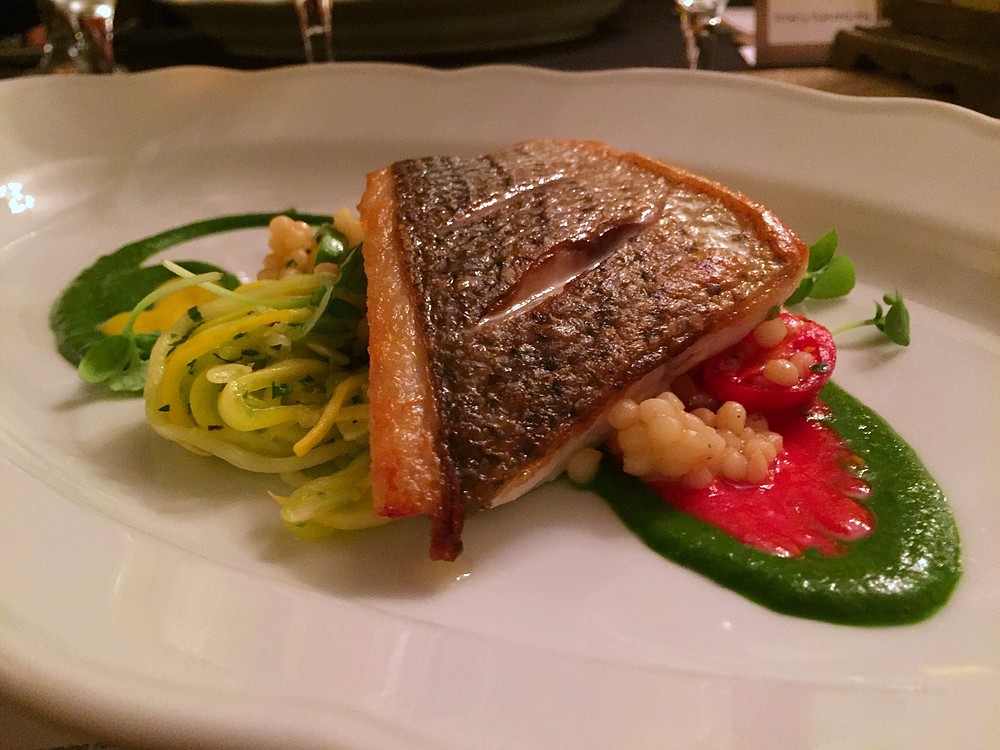 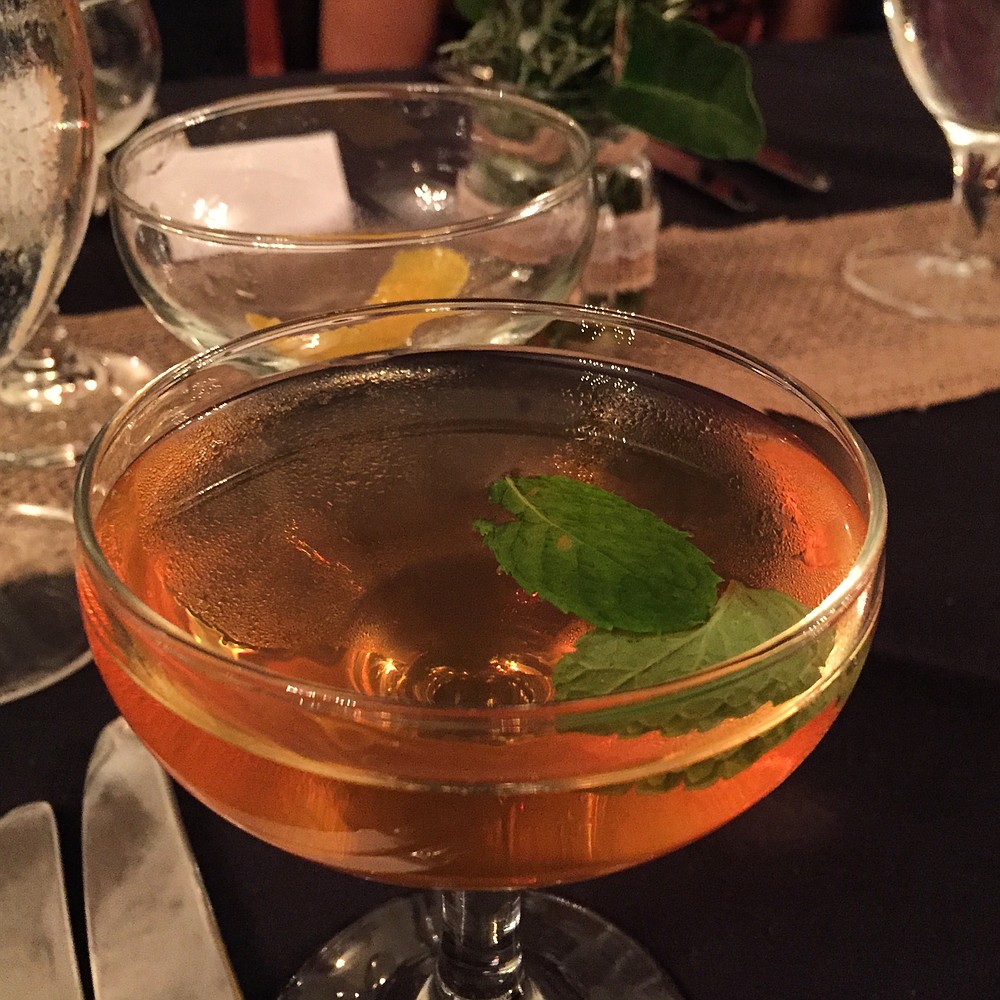 Cocktail made with Henebery Whiskey 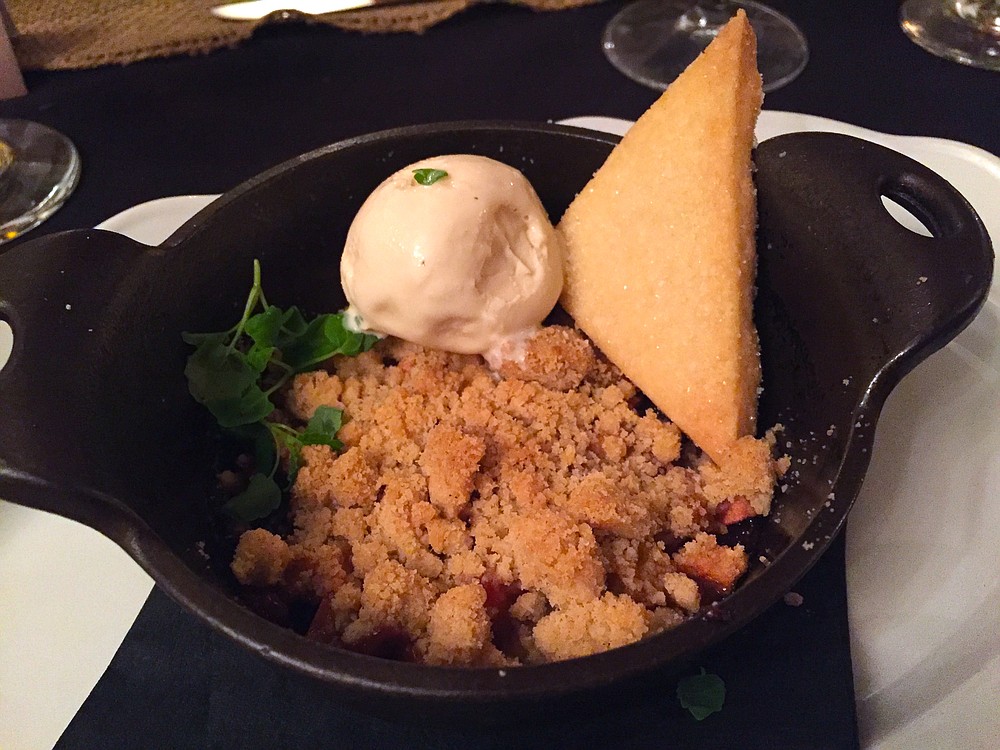