Hype wedged into a bun 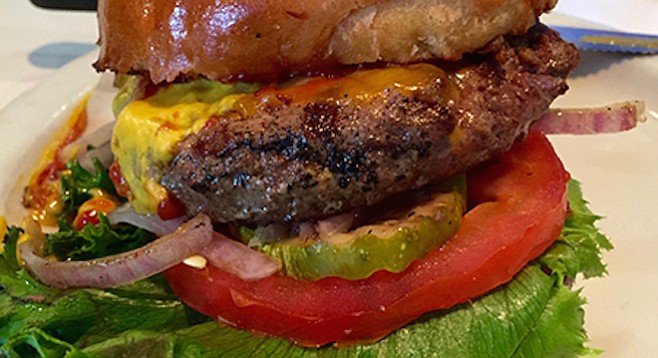 Salt separates the bland patties from the ones that sing hymns of meaty goodness. Thus, in the salty spirit, while my brilliant colleagues (each one infinitely more well mannered, and supremely more qualified than me) extol the virtues of America’s Finest Burgers, I present you a ranked list of overrated burgers. Louis CK might put it: Of course these are all tasty hamburgers. Of course they are. But maybe, and I’m probably wrong here, maybe they’re pure hype wedged into a bun with nothing but a limp lettuce leaf and a mealy tomato for company. Maybe. Think about it. After all, what’s the point in having Sacred Cows if you can’t periodically grind their chucks into profane burger meat?

The little lies we tell ourselves as we tuck into that animal-style Double Double, and think, It’s okay. This is different...not like those other fast-food joints. But, is it true? Was that burger, fries, and neopolitan shake somehow not 1500 calories of fat, salt, and sugar? Do we not consume it in our cars because we’re too lazy — sorry, I meant busy to visit a real restaurant? Even I, from here atop my gastronomical soapbox, often subdivide fast food into “In-N-Out and everything else,” as if some intangible burger magic makes our favorite drive-thru other than what it is: a heavenly grease indulgence sent by the burger gods to inflame our livers.

How can anyone naysay Burger Lounge? They compost waste and turn used fry oil into BioFuel! I might as well say (Saint) Mother Teresa looked silly in her wimple. This is the kind of indefensible position Donald Trump would occupy during the fallout from a televised debate on whether or not the Federal Secret Sauce recipe was imported from Kenya. And yet, for all the good vibes, there’s this little sneaky shoulder devil who keeps reminding me that, no matter how many Burger Lounge burgers I try, I never remember what they taste like. That can’t be good. I’ll just find my own way to hell, thanks.

If someone said the 50/50 burger — beef and bacon ground together in atherosclerotic harmony — was invented for an episode of YouTube food comedy Epic Meal Time, you’d probably believe it. After all, it sounds like something drunken Canadian bros would invent to amuse themselves during the endless darkness of the Alberta winter, and, much like Epic Meal Time, everyone should experience this once, and then never again. The ultimate irony is that, under the crazed American doctrine of “pork is instantly lethal if not cooked into oblivion” the medium-well 50/50 burger pales in comparison to the regular burgers at Slater’s, which are actually okay.

Professing a love for Rockyburgers represents the pinnacle of hipster sophistry. Ironically, the entire position rests on the premise that Rocky’s burgers transcend earthly burgerness through sheer humility and lack of affect. That’s insane. If that’s sufficient for greatness, I hereby declare 7-Eleven the best coffee in San Diego, because, man, you can just feel the authenticity there. (Fun fact: I adore that 7-Eleven blueberry coffee in the morning because hypocrisy.) Truth is, Rocky’s is a sports bar that serves burgers so extraordinarily ordinary they deserve to dwell forever in smug anonymity. Putting Rocky’s on anybody’s best-of list insults seedy dive bars everywhere.

People treat Hodad’s like it’s some kind of hamburger-shaped slacker conceit for all of San Diego, which I assume means, “overcrowded; overpriced; and teeming with surly, sunburnt Midwesterners on any day that ends in ‘Y.’” There’s a thing called the “sunk cost fallacy,” which, in hamburger terms, means that the longer you stand around waiting for a burger the more likely you are to keep standing in line despite the realization that no burger could possibly be worth so much trouble. Eventually, you conclude it was “totally worth it” in order justify all the time you spent standing in line. But, hey, that’s cool. We’re all fallaciously human. And the milkshakes are damn good.

Had the "Chuck Norris" at the Rabbit Hole on Adams ave. Very good! Lots'o burger and a chicken stuffed jalapeno pepper wrapped in bacon on top. Filling, tasty, and compliments a nice I.P.A very well.

In 'N Out, though, is the best burger deal. Not the best burger, not by a long shot... but for what you get, it's a fantastic deal. You can pay a little less for a much worse burger; or a lot more for a better one, but In 'N Out occupies a sweet spot on the price scale!