That sacred union of beef, bun, and other junk 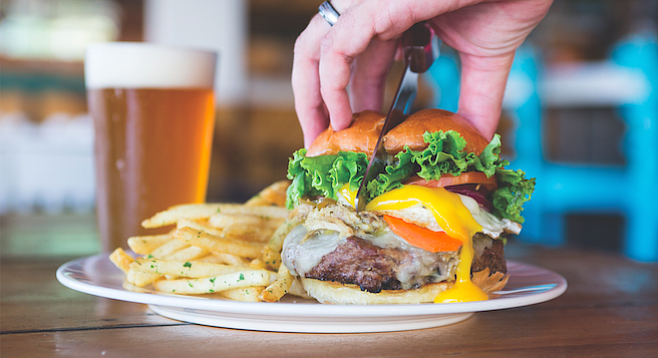 The hamburger’s toothsome alchemy has enchanted appetites everywhere since first materializing during the late 1800s in Connecticut, Wisconsin, Oklahoma, Texas, New York, San Francisco, or Germany, depending on whose historical account one is to believe. These days, the word is synonymous with comfort-eating, and San Diego is home to more than a few such noteworthy pleasure patties. Hold your breath. Make a wish. Count to three.

It makes sense that the hop-addled minds behind Bottlecraft would put an emphasis on beer at their much-ballyhooed North Park eatery. Their 30 taps highlight West Coast brews along with over 300 bottled beers. Chef Amanda Baumgarten (as seen on Top Chef) has designed a compelling menu of buns built with wild flourishes such as deviled yolk spread, BeerBQ sauce, and fried green tomatoes. At a sturdy $16, the Waypoint Burger features aged white cheddar, pulled pork, roasted garlic aioli, spicy house pickled veggies, and a sunny-side-up egg. It’s every bit as delicious as it sounds (and costs).

Station Tavern’s story dates back to the early 20th Century, when the location served as a stop for the trolley line. Designed by local architect Lloyd Russell, Station boasts a dog-friendly layout replete with one of San Diego’s best beer-sippin’ patios. Their burger is a classic 1/3-lb. Angus chuck patty with lettuce, onion, tomato, and pickles on an eggy bun. Bling it out with bacon, a sausage patty, avocado, kraut, a fried egg, jalapeños, caramelized onions, or pepperoncinis. The amazing spicy black-bean burger is not particularly spicy but is made with red peppers and whole beans sauced with lime-cilantro aioli. 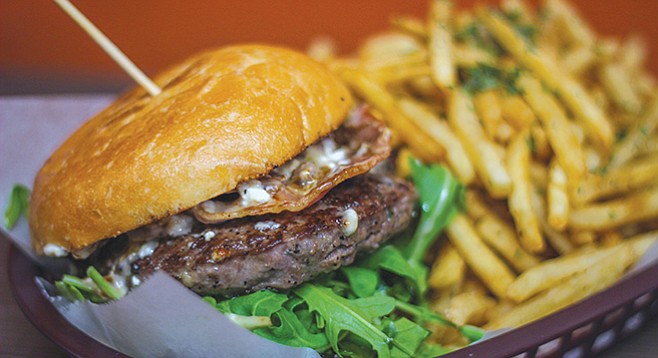 The joint is standing room only with two small tables outside, but the menu packs big flavor into the modest locale. At $8–$9 a pop, the roadside gourmet burgers and sandwiches come with your choice of fries or salad. Try the Moroccan fries for something, uh, twisted.

The Balboa Bar and Grill

Balboa’s burgers are so popular among the nearly 10,000-member strong Facebook group Eating and Drinking in San Diego that even a mere mention of the place has become faux-pas. It’s all for good reason. These things are redonks. Balboa’s namesake burger comes with a 1/3-pound 70/30 beef patty, lettuce, tomato, onion, and house aioli on a fresh bolillo roll baked in Barrio Logan. Cooked to medium-rare, the patty is juicy and pink in the center. Chase it with some garlic fries and one of Balboa’s seasonal craft cocktails. The best part? This bangin’ burger goes for $5 during happy hour.

Gender-neutral bathrooms with “It’s Pat” on the door. Postmodern art that simply reads “SHOTS.” Michael J. Fox from Teen Wolf. It’s not a UC Santa Cruz dorm room, it’s the most recent venture of the folks behind burger hubs Waterfront and Harbor Town Pub. Poke in on a Monday for the $10 select beer and Kiss Burger, a straightforward but saliva-churning stack of 1/3-pound beef, grilled onions, house sauce, greens, tomato, and pickles. Or go on Sunday and roll the dice to get up to 66 percent off your tab. Their 33 taps spew $4 specials weekdays from 3 to 6.

The international Smashburger franchise is doing a pretty good job at this fancy fast-food thing. 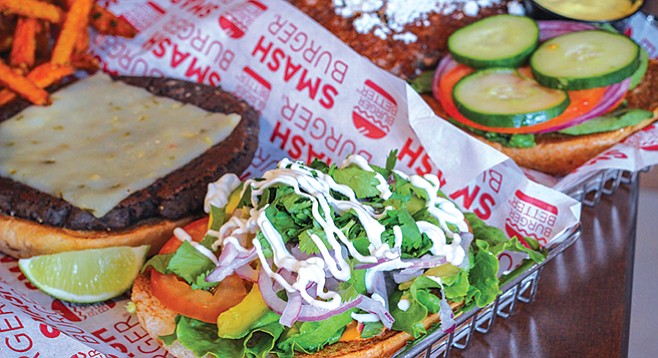 Their regionally inspired San Diego Burger appropriately features avocado, cilantro, pepper jack, lettuce, tomato, onion, sour cream, and chipotle mayo on a telera roll. Served with a wedge of lime, the Cali-Baja creation is fresh and invigorating, approaching California burrito status when you pack it with Frank’s Red Hot fries. Or just build your own with ingredients such as guacamole, applewood-smoked bacon, sauteed crimini mushrooms, truffle mayo, and chipotle buns.

Health types will appreciate Pure Burger’s offering of fresh-ground “100% Organic, Grass Fed, Free Range locally sourced, never frozen Beef.” They even go so far as to assure us that their french fries are gluten-free and cooked in non-GMO rice bran oil. All this translates into good ol’ fashioned burgers made with top quality, no-nonsense ingredients. The House Burger puts seven ounces of moo with two slices of Tillamook cheese (cheddar, Swiss, or pepper jack) on your choice of white, wheat, or lettuce wrap (“gluten-free”) bun. And yes, they have gluten-free buns, too.