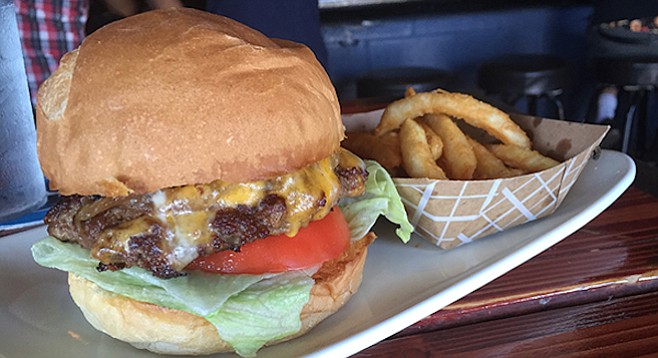 Much as football replaced baseball, I believe hamburgers long ago ousted hot dogs from the traditional trinity of Americana: baseball, hot dogs, and apple pie. Apple pie has probably been replaced by Oreos. Lamentably, we Americans are too busy thumbing tiny screens to be bothered with rolling pie dough. Baseball, possibly the world’s most boring game, was in bad need of replacement. No sadness there. Hot dogs I still love. But much like soccer, which I also love, they aren’t really American. Sausages are European by nature. Big slabs of beef — though they be ground, formed into patties, and put on buns — are as American as football and Oreos.

I’m told this tiny hamburger heaven — the ordering/eating area is about ten-by-ten feet and has only four metal stools — is going to open a second, larger location a couple of miles east at Jamacha Road. I begrudge nobody the fruits of their hard work, but I could almost wish it weren’t so. There’s something romantic about a place so small turning out burgers so good. 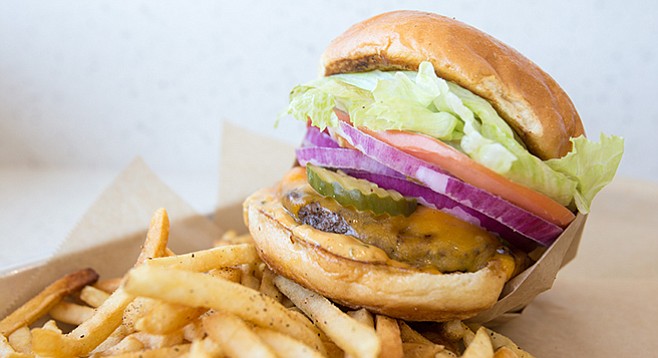 The $7 Funky OG nears the pure platonic form of hamburger. No improvements could be imagined. One tastes beef, good beef. Not salt. Not grease. The lettuce, red onion, pickle, and spongy bun enhance but do not overpower. They have a menu of specialty burgers, pork sandwiches, fries, and dogs, too.

Charley’s is the soul that In-N-Out lost when it added McDonald’s-style dining rooms to what was a local chain of funky little drive-thru/walk-ups. It’s crazy to me that a line of cars often wraps around the In-N-Out at Massachusetts and Broadway when Charley’s lies a few blocks to the east. It’s fun to drive through this old-timey red-and-blue burger shack. You get a pre-dinner show watching the crew hustle in the tiny glassed-in kitchen hut. The burger comes in a sesame-seed bun bearing an inoffensive amount of thousand-island dressing. Fresh shredded lettuce and thinly sliced white onions add crunch and piquancy. A few pickle slices supply a touch of saltiness. The tight yellow paper wrapping makes one-handed burger management a snap. It’s drive-thru burger perfection for $3 ($3.35 if you want cheese).

This joint sits at the eastern terminus of the Orange trolley line. The menu features 37 burgers from basic to non-beef to gimmicky. I tend to stick to the Classsic ($6). Why gild the lily of a perfectly cooked medium patty, thinly sliced purple onion, leafy lettuce, pickle, and tomato on a brioche bun? Instead of burdening my burger with pastrami, potato chips, and eggs — though buddies tell me that combo, called the Hangover ($8), is delicious — I like to pair it with a local brew from one of Anny’s taps and watch the East County sunset on the busy patio out front.

It’s kind of a pub, kind of a sports bar, but also an all-ages venue. There’s a well-stocked full bar, but better news for burger lovers are the 21 taps of local beer. I found the Karl Strauss Dos Californianos Mexican-style lager with agave and habanero complemented my Hills Burger well. At 10 bucks, 11 with cheese, it’s the eponymous pub’s entry-level number — a thick patty so soft and juicy that the condiments on the plank-and-steel table aren’t needed. Normally, I’m all for the basics, but here I prefer the Bouffant Burger ($12) — named for the hair salon next door — which is served on a croissant and topped with avocado, chipotle sauce, and a fried egg. Warning, the crunchy fries here cause addiction. 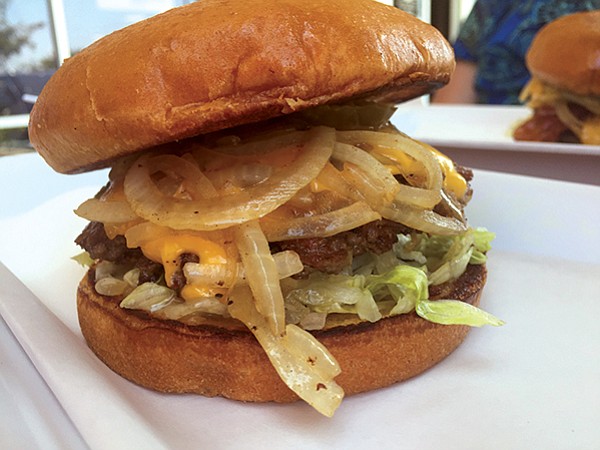 Across one street from a junior college (Southwestern) and another street from a high school (Bonita Vista) is a smart place to open a burger joint. Also smart, bucking the trend of gimmick burgers and offering five basic burgers at great prices: Classic cheeseburger ($6), Classic with bacon ($7), Giant Classic, Small cheeseburger ($3) and the strangely named Double Small cheeseburger($5). Their buttered brioche buns might be the best I’ve had in San Diego. The Classic Cheeseburger is a stomach stretcher (I can only imagine what the Giant looks like) and so good that at $6, it might be the best burger value in all of San Diego. You can pay thrice that for inferior burgers in more fashionable parts of town. 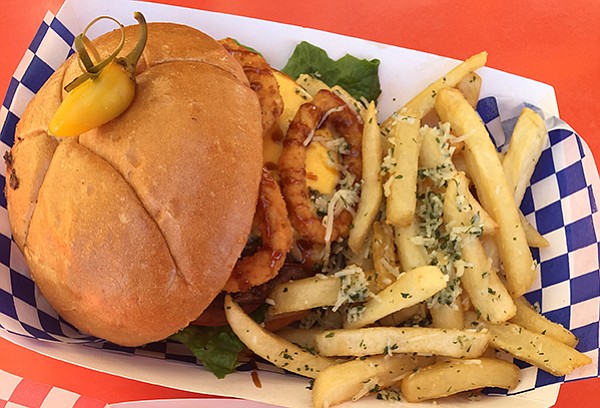 I can’t speak for the hot dogs and shawarma, having had neither. But I could speak for hours about the burgers. Despite the burger-joint decor, these aren’t fast-food hamburgers. Be prepared to wait. But if anything were worth waiting for.... The basic Jordan’s Burger is $7, but this is a place where I like to get gimmicky, because they do it so well. Who knew lime and cilantro would work as well as they do on the Avocado burger ($9)? Cilantro also appears in the Mexican burger along with queso fresco and sauteed jalapeños($8.50). I love the grilled pineapple and the teriyaki aioli on the Hawaiian ($9).