Was Guns 'N Roses worth the wait?

After 23 years, a packed Qualcomm stadium screamed to think so 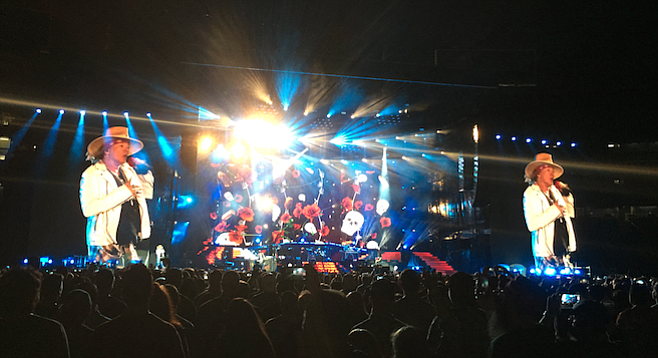 “Do you know where the fuck you are? You’re in the jungle, San Diego!” Axl Rose screamed as he and his Guns N’ Roses bandmates launched into “Welcome to the Jungle” at Qualcomm Stadium, the last stop on their 21-city North American “Not in This Lifetime” tour. It was the first time since 1993 that Rose shared a stage with lead guitarist Slash and bassist Duff McKagan.

"Welcome to the Jungle" 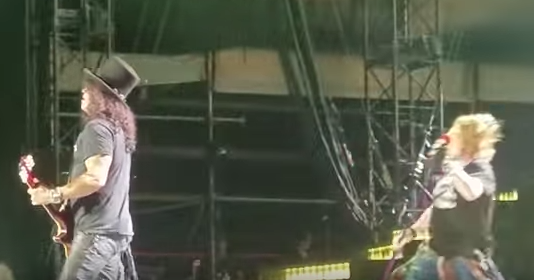 Perhaps nodding to how crazy this reunion was, the sold-out show opened with the Looney Tunes theme. The generous, 26-song set that followed jumped from hits (“Paradise City”), to rarities, to numerous covers, including Pink Floyd’s “Wish You Were Here,” during which Slash and rhythm guitarist Richard Fortus shared a nuanced duet.

Frequently unleashing his trademark serpentine sway, Rose sounded best when his yawp was sandwiched within a heavy song like “Civil War”; he was less convincing on ballads such as “This I Love,” a surprising inclusion from Chinese Democracy that was so harsh he blamed technical difficulties.

Slash fared better, displaying skillful fretwork on such songs as “Love Theme from The Godfather,” which segued into a jaw-dropping solo and “Sweet Child O’ Mine,” one of many songs from the band’s landmark 1987 debut Appetite for Destruction.

Was the nearly three-hour sonic assault, with its high points and imperfections, worth the wait?

During the band’s encore, as they played “Patience” — something their fans needed plenty of the past 23 years, eight months, and several days — the answer was a resounding, ear-ringing yes.