Autumn color, a new moon, and a conjunction

Venus and Saturn get close this weekend 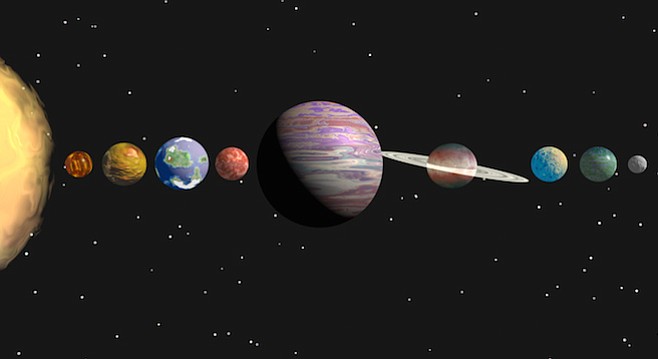 Conjunction between Venus and Saturn — Spot the beautiful sight of Venus and Saturn's close encounter on Saturday, October 29, as they pass within less than three degrees of each other after sunset in an event known as conjunction. At around 6:30pm after dusk, catch the pair in the southwest horizon. Venus appears the brighter of the two, and Saturn will be to the slight upper right.

New Moon October 30 — A dark moon before the chilly winter completely sets in presents excellent opportunity for stargazing. Find many of the bright autumn and winter constellation objects in the night sky. Bright naked-eye objects from reasonably dark locations include the Pleiades star cluster and Orion Nebula rising in the east at around 10pm.

Autumn Color in San Diego County’s mountain areas reaches its greatest intensity in late October and early November. The forested heights of Palomar Mountain arc especially colorful right now. Black oaks on Palomar’s rolling uplands will be exhibiting bright yellow and brown hues for the next few weeks. Cuyamaca Reservoir, although hard hit by the fires over the years, remains a worthwhile leaf-peeping destination. The shimmering leaves of the Lombardy poplar, an Italian import that has taken root at the south end of the lake, delight the eye with their golden radiance.