Novo Brazil busting out the brews 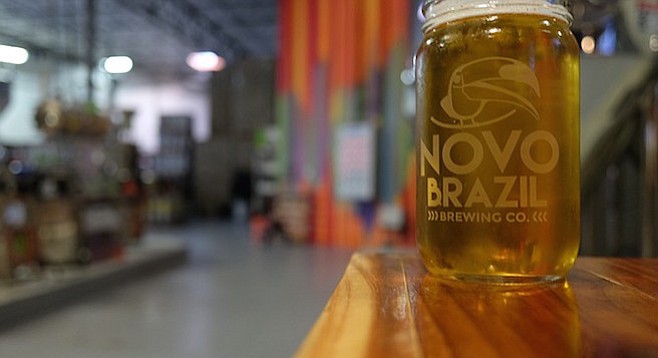 South of the 54 and east of the 125, Novo Brazil Brewing Co.'s Eastlake Chula Vista location has always seemed a little far removed from the rest of San Diego's brewing scene to explain its 1400 barrels of fermenting capacity. Now, with 18 months of fine tuning under its belt, the Brazilian-owned brewery is making moves to bring its beer to a wider audience, including a plan to open three satellite tasting rooms.

"Novo Brazil is open for little over a year, but we considered that we opened, like, four months ago," says recently hired general manager (and assistant brewer) Mauricio Lima. "This was a great year for us with all the awards, and now we think that we are ready to put our beer out."

Those awards include a bronze at this year's installment of the prestigious World Beer Cup, and five medals from the far lesser known World Beer Awards. The brewery has turned those accolades into distribution deals to send Novo bottles and cans to five states and counting, plus a few points international. "We're already selling to Mexico a lot, Canada," notes Lima, "Now we have orders from Japan, Hong Kong, and Italy."

However, while its distribution is growing, Novo's biggest investment in the next year will be to better establish itself as a local brand by opening as many as three taprooms, all within South Bay. "For sure we're going to expand," Lima says, "Which one's going to come first, we still don't know."

The team is currently working on satellite locations in Imperial Beach, National City, and downtown Chula Vista. "The main thing, we're doing it all in this area. We think we need to be strong in our own backyard first, before we go adventure anyplace else."

Each of the potential sites has planned or ongoing development projects, particularly the downtown area around Third Avenue in Chula Vista, which is rapidly on its way to becoming a beer-centric neighborhood. Chula Vista Brewery and Thr3e Punk Ales are currently completing build-outs in the historic business district, while bar/bottle shop Third Avenue Ale House should be joined by Biere Café sometime in 2017.

It would be "Muito Bom" if they moved next door to Brasil By the Bay Restaurant behind the Sports Arena (or the Whatever - The - Hell - You - Call - It - Arena).

Feijoada and beer. What a combination! Imagine the gas produced. Global Warming increases with a new funky odor.