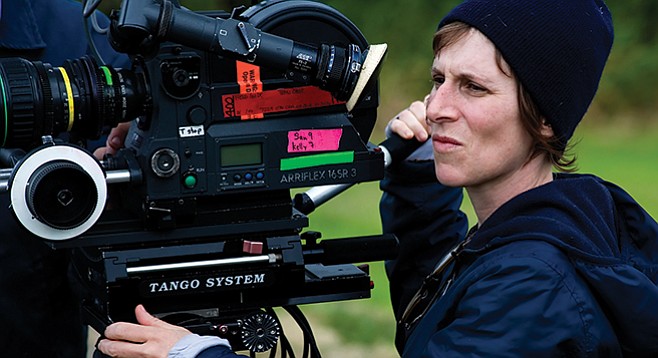 Seconds after the email offering an interview with Kelly Reichardt crossed my desk, a reply in the affirmative was sent. Hopefully I made the best of our brief time together.

Scott Marks: Can you give me one of your earliest memories about going to the movies?

Kelly Reichardt: I grew up in Florida. My dad was very into The Pink Panther movies. I remember going to the drive-ins in Miami where there’d be four screens and the screens on either side of you would be R-rated. The instruction would be to only look forward and not look to the screens on the side, which was very hard not to do.

The first film I saw that made a real impression on me was on television. I saw What Ever Happened to Baby Jane? at my grandmother’s house. My grandfather used to put a piece of masking tape on the carpet which was called the TV line. You weren’t allowed to sit in front of the TV line. Growing up in Miami...the film ends with that scene on the beach. Seeing the beach in black-and-white...it made the beach seem so ominous to me. It was the first time that it occurred to me that I was seeing something that I see all the time, but in a different way. 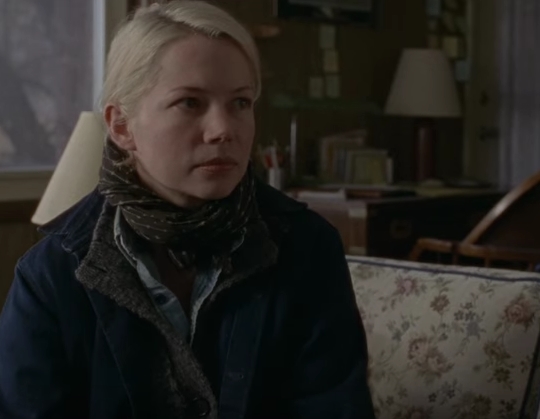 SM: Does your pre-production process include researching other films, and if so, what films were consulted during the making of Certain Women?

KR: I teach film. I’m always deconstructing them with my students, looking at pieces. One of the beginning points for designing Certain Women, we were working off of Milton Avery’s paintings for our colorscape. We looked at a lot of Alice Neel photos, especially for the Laura Dern section. As for films, I was thinking about — less in a filmmaking way, but in a character way — Mary Tyler Moore’s character in Ordinary People. That character has always stuck in my mind. It’s such an amazing performance, how full-on Mary Tyler Moore embraced that role. It was a woman too scared to live close to her emotions. There’s not a lot to love in that character, and she does it so bravely. Ultimately, I feel a lot of sympathy and empathy for that character.

The end of that film really does hit a note of “finally she’s gone and the men can enjoy their life.” I always felt the ending of that film was a little disappointing. I thought of that character, but at this point in life, you’re kind of in a constant engagement with film. It’s harder in the case of Certain Women to say exactly what films...it was more about being in the place and wanting to figure out how to use that space and translate the way time is experienced.

I could maybe just say a word about Peter Hutton, who I taught with for ten years up at Bard and who passed away this summer, and also Chantel Ackerman. Those are two filmmakers...the way they approach time in film, and deal with time and also space, and the way they frame their films. They were both hugely influential filmmakers to me. I’m so sorry to see both of them gone.

SM: Great to see you provided Altman staple Rene Auberjonois with a plum role. He will always be remembered fondly for his role as the flighty bird lecturer in Brewster McCloud. The quail call wouldn’t by some chance be a tribute, would it?

KR: I really try to stay in the movie and the characters and not think of things in any outside way. Likewise, I loved him in the Altman films. I loved his bartender in McCabe and Mrs. Miller. I often use that scene in my classes when I’m teaching, so it was fun to finally get to work with him.

SM: Lily Gladstone’s performance is a revelation. The strength and quiet dignity she brought to her character was remarkable. How did the two of you hook up? 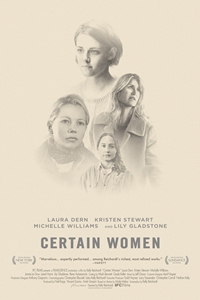 KR: One of the directors of Winter in the Blood — I can’t remember if it was Alex Smith or Andrew J. Smith — she was working with Rod Rondeaux, who was in Meek’s Cutoff, and I was asking him about this part, and he told me to look up Lily Gladstone. Her name had come up a couple of times. I was already in Montana, and I was so fearful that I wasn’t going to be able to find this person. She heard about us also and sent us a tape of herself doing a scene. She has such great instincts. I wrote her and gave her a few little ideas of another way to go about it, and she re-filmed herself and sent it again.

That character is not Lily Gladstone. She’s such a natural that you think that must be who she is. She’s actually doing something. She’s a really good actress.

SM: You always give your characters interesting little bits of business to do, in this case having Kristen Stewart wipe her mouth with a rolled up napkin that still had the silverware in it. Where did that come from?

KR (laughing): From the brain of Kristen Stewart.