Good reasons to avoid costumes that are in poor taste 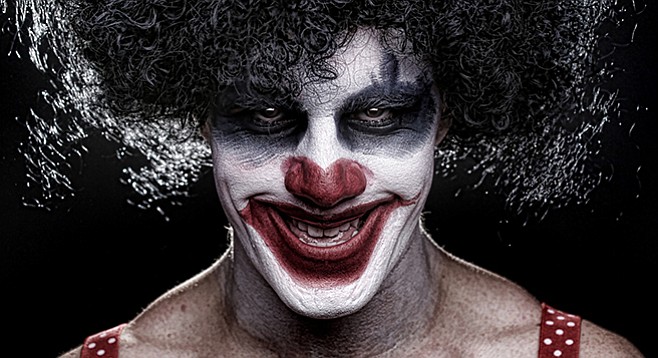 My fave, the pop-culturally appropriate Hipster Halloween Costume Rundown. This year, the easy choice is scary clowns. I’m not sure if the whole “clown attack” thing is real or not, but I do know that a Connecticut school district would ban clown costumes at Halloween this year, which is a bit like forbidding cranberry sauce at Thanksgiving dinner because somebody’s aunt read in the National Enquirer that cranberries are an alien life form intent on world domination.

Twenty-sixteen gifted us a bevy of potentially in-poor-taste costumes that I know a lot of you will be tempted to try. Here are a few of them, and the good reasons you hipsters should think long and hard before going to the office party ironically dressed as...

You Obviously Shouldn’t Because...this could not possibly contain less happiness. The only thing sadder than shooting one of nature’s coolest primates is sitting idly by while a 400-pound ape smashes a toddler.

But Then Again...it’s a lot harder to dress up as an internet’s worth of Facebook trolls armchair quarterbacking a damned-if-you-do-damned-if-you-don’t moment for Cincinnati zookeepers.

YOSB...there’s something odious about resurrecting a thing we probably shouldn’t have ever been talking about in the first place. Also, you don’t have the pecs. Sorry.

BTA…I know you’ve been wanting to make one of those yellow, skin tight, tear off shirts since Wrestlemania IV, and this may well be your best and only chance!

YOSB...just because you can beat up a kitten doesn’t mean you should.

YOSB...complicated political absurdities are just too hard to capture with papier mâché, and having to explain your costume is just going to get more and more pitiful after each successive beer.

BTA…if you can pull it off, you might be a Halloween Costume God(dess).

YOSB...that shit is terrifying. Please don’t make me see this at a party. You’ll kill my appetite for artisanal spiced whisky cocktails.

BTA...the message about how we’re all going to die in horrible car crashes if we don’t stop driving like lunatics is totally on point.

Trump With a Box of Tic Tacs

YOSB...the man was talking about how to perpetrate sexual assault, and one does not simply laugh with his friends about sexual assault.

BTA...dressing up as Sexual Predator Trump (now with karate-chopping P*Y-grabbing action!) might just be the stirring indictment of rape culture modern america has been looking for. Doubly likely if you’re a sharp-witted woman. Still, probably not, but maybe. Don’t say I didn’t warn you.

Ryan Lochte With a Can of Spray Paint

YOSB...actually, I can’t think of any reason why this guy doesn’t deserve derision at Halloween parties nationwide.

Don’t forget, I want to see your hipster halloween costumes. Email me after the holiday and I’ll try to give you a shout out, or at least send some solid gold-ish [email protected] your way.