"Banning their use is the best solution." 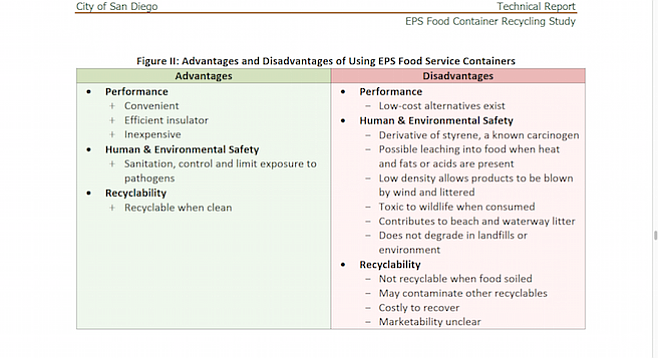 Polystyrene food containers will continue to end up in San Diego's landfills, according to a report to the city council this week.

The containers are too likely to contaminate the other recyclables with food waste and there isn't much of a market for the recycled material, the consultant's report said. 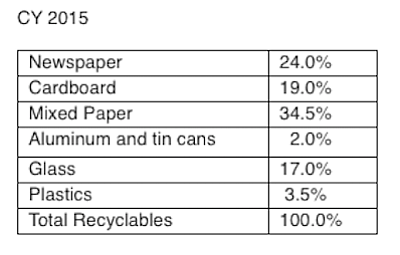 Breakdown of recyclable materials collected in the city's blue bins in 2015. The three fiber commodities — newspaper, cardboard, and mixed paper (magazines, junk mail, etc.) — are 77.5% of the material.

The city Environmental Services Department had identified the food containers as one of a number of materials that had the potential to be recycled and sought more information on how it would pencil out. The department already diverts more than 67 percent of the trash it collects away from the landfill and to recycling; under the Zero Waste goals set in 2015, the trash haulers are aiming for 75 percent by 2020.

By comparison, in 1995, about 39 percent of trash was recycled, city recycling manager Ken Prue said.

"San Diego was aggressive about recycling then," he said. And even though population has grown by more than 200,000 people, the total tonnage of trash we generate has remained at about 1.5 million tons a year.

"We're already recycling the items that make up the large part of what can be recycled," Prue said. "Now we're looking at the smaller items. We work by weight — it comes down to where there's opportunity." The city does recycle larger pieces of polystyrene, including the styrofoam forms used as protective packing for products such as printers and TVs, but not styro "peanuts."

Prue said that residents recycled about 46 tons of such packaging last year. That's less than 1 percent of all trash and recycling, by weight. Because of the costs of setting up to recycle food trays, the city would lose about $290,000 in revenue that it normally recovers from recycling, the report says. The trouble with styrofoam containers is that the material doesn't break down on its own, experts say, and it often ends up as litter.

"These containers just can't be safely handled," said Genevieve Abedon of Californians Against Waste. "That's why banning their use is the best solution."

The group estimates that 155,000 tons of the containers end up in California landfills each year.

"Because they're contaminated with food, they can't really be processed — and they're likely to contaminate other valuable recyclables," she said. "We encourage people to bring their own to-go containers."

Contamination by food is a big problem — especially when it comes to paper, Prue said.

"Paper streams — that's newsprint and magazines and cardboard and regular paper — having any type of contaminant reduces the value of the material and the processors can even refuse it because they can't reuse it," Prue said. "Our contracts are based on the highest quality recyclables with the lowest possible contamination and we're looking for the highest revenue."

Why not just encourage restaurants and fast-food joints to switch to other disposable or compostable containers? Relying on packaging that says a material is compostable is a mistake, according to Abedon.

"Not all containers are truly compostable, no matter what the packaging says," Abedon said. "Unless they are certified by the Biodegradable Products Institute, which is the gold standard, anyone can make any claims they want."

One of the problems of trying to recycle the food containers is that there is no reliable market for post-recycled polystyrene, according to the report. While Dart and the packing institute have said that recyclers can get 8 cents to 10 cents a pound for it, buyers are scarce and conditions are clear: “NEPCO, maker of picture frames, and Timbron, maker of architectural molding, are the only known companies that use reclaimed EPS to make their products. Both companies stated in letters circulated by Dart that they can only use EPS that is clean, i.e., free of contaminants and food residue,” the report says.

Last year, Solana Beach banned styrofoam food containers, over the objections of a handful of restaurants and the California Restaurant Association. Encinitas appeared to be on the same path a year ago, but set the matter aside for further study after restaurant owners complained about the additional costs.

About 90 municipal governments in California have banned the food containers, Abedon said. EDCO, which handles recycling for La Mesa and other smaller cities, does accept the food containers, emphasizing that they must be clean. The director of recycling there says they "probably break even" on the recycling, though, he said, "the program isn't cheap."

The solution is to add a 5 cent CRV for every "new" container and then they will be cleaned off and recycled just like Aluminum cans and plastic bottles are!

I'm sure the restaurant industry will whine but the fall back position should be for the City to add a special fee to all food that uses these containers (like there is for paint, tires and auto batteries to make sure they get recycled.

Beware of solutions that call for 'just one more fee/tax'; especially in California where all fees and taxes are transferred or otherwise loaned to the General Fund and rarely used for the purpose one would expect. Education and recycling is a much better avenue to pursue, containers can be rinsed before disposed of and our brain-trust can be engaged to discover recyclable uses for Styrofoam containers (plastic bags too). There are lots of things I don't like but that doesn't give me the right to ban and tax.