Along comes a cider 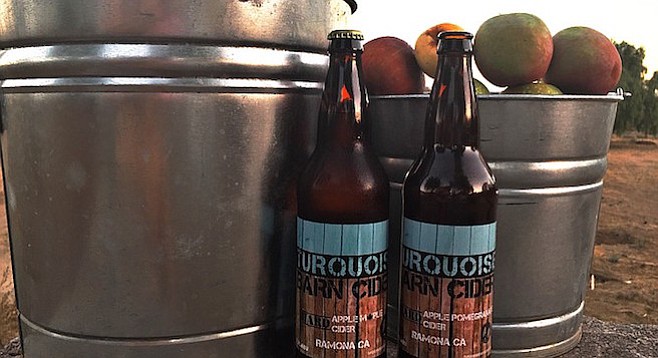 While he worked at it several years, Neil Kennedy never considered himself a great homebrewer. "I was always really mediocre at making beer," he says, and being an Escondido resident meant he couldn't exactly talk himself into thinking otherwise. "Living two blocks away from Stone, it was always easy to get some of the best beer on the planet."

However, when he discovered cider a couple of years ago, Kennedy's home-fermenting efforts fared better, to the point some he'd shared it with came back asking for more. "People within the industry were excited and supportive," he recalls, "even wanted to buy some."

So he moved on from making beer and developed cider recipes instead.

"I started adding other fruit to it," Kennedy says. "I played with it a little bit and was really able to manipulate it a lot better than beer." His third batch of cider became the basis for a pomegranate take offered as a core product when he launched Turquoise Barn Cider in March.

The namesake barn sits on a nine-acre property Kennedy's in-laws own in Ramona. Pete and Patty Lavelle had been planning to sell the old chicken farm, but as Kennedy started getting serious about making cider, they started a family business instead — with Pete as president and CEO, Patty as CFO, and Sarah Kennedy (née Lavelle) as director of marketing.

About 500 apple trees grow on the Ramona property, enough for some, but not all, of their cider production. Kennedy blends the home-grown apples with product from the Pacific Northwest. In addition to pomegranate, the cidery offers a maple version year round and has issued seasonal flavors Apple Pie à la Mode and Pumpkin Spice. For winter, Kennedy is working to develop a salted-caramel-apple flavor. He says this one's a little more complicated, but it could be more so.

"I was amazed how diverse and interesting and even weird cider is around the world," he explains. Like beer, some cider makers experiment with use of wild yeasts and bacteria to add funky flavors. Thus far, Kennedy's keeping it simpler. "We are definitely a sweet cider," he says, "but I wouldn't put us all the way to dessert cider."

Unlike beer, making cider requires a winemaker's license. Still, depending on which ingredients he's working with, Kennedy uses White Labs' English or California Ale yeasts to produce ciders measuring around 7 to 9 percent alcohol by volume — lighter than most wines and a little stronger than most beers.

Due to the cost of improving the property to code that would allow beverage service, Turquoise Barn does not yet offer a tasting room. Instead, the family kegs and hand-bottles to self-distribute to a burgeoning list of local accounts, including Urge Gastropubs, The Local restaurants, and more than a dozen mostly North County liquor stores.

The Kennedys and Lavelles do plan to grow the business eventually, including a tasting room in Ramona or more central to town. But for the moment, Kennedy is content to make cider after clocking out of his engineering day-job. "You can't really have that bad of a day making booze," he says.