Another water-main break at the border 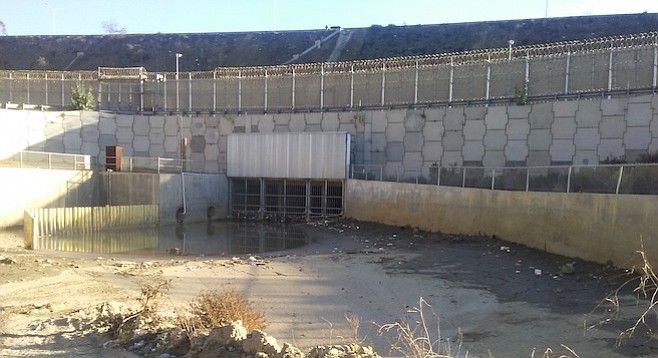 A broken pipe in Tijuana spilled clean water into Goat Canyon on Tuesday (November 29). The potable water spilled into the canyon through ten-foot-in-diameter drainage culverts for about three hours before Mexican authorities got it repaired.

The water-main break happened in Las Playas, according to International Boundary and Water Commission operations manager Steve Smullen. He got word of it around noon, he said.

Normally, when water comes across the border, it isn't potable. The sewage pipe that broke in Los Sauces/Yogurt Canyon earlier in November continues to send "cloudy water" into Yogurt Canyon even now, according to a commission report.

The Tijuana River also flows after any heavy rain storm, and Mexican authorities almost always shut down the CILA pump station that diverts river water for treatment in dry weather because the sediment in the storm water can damage the pump.

The river crosses the border south and west of the Dairy Mart bridge in a concrete channel and heads north into the county and state parks, turning west about three quarters of a mile from the border. Water — dirty or clean — also comes through culverts at other low points, including Smuggler's Gulch, at Goat Canyon and at Yogurt Canyon.

Smullen says that potable water lines break "a couple of times a year." One clean-water break occurred a few years ag at a water tank up in Las Laureles canyon and by the time the water reached the border, it was full of silt dragged out of the canyon. The silt jammed up the IBWC wet well at the Goat Canyon pump station, and Mexican authorities sent people to clear the wet well, he said.

While knowing that water is in short supply, this spill may have had a salutary effect, namely that it washed a bunch of accumulated crap out of the gulch and river valley. Since it seems that most of the flow in that river that comes into the US is contaminated and filthy, a little turnabout is welcome.