A hike down in Maple Canyon 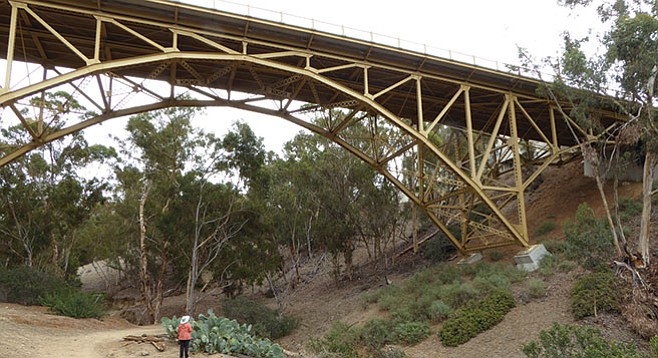 An early start is highly recommended for prime parking, less traffic, and lower temperatures for this interesting walk below the Quince Street and First Avenue bridges that spanned Maple Canyon to allow access to streetcar routes.

Start the walk at the eastern end of Quince Street and continue across the wooden trestle bridge, built in 1905 with a construction cost of less than $1000, that allowed easier access to the then–Fourth Avenue trolley station. After crossing to Fourth Avenue, retrace your steps while viewing the Maple Canyon Trail as it goes under the bridge.

Turn right on Third Avenue and then right again just after the Maple Canyon Open Space sign. Follow the dirt path shaded by eucalyptus trees down past the Quince Street Bridge. There is a mixture of coastal sage-scrub and chaparral plants along with nonnatives along the trail. Prominent native plants include two members of the sumac family — laurel sumac and lemonadeberry.

Laurel sumac (Malosma laurina) grows in frost-free areas where early growers used healthy plants as an indicator that the area would be favorable to both citrus and avocado trees. Laurel sumac leaves are lance-shaped, up to four inches long, and look like taco shells with sides coming together in orientation to the sun. In late spring and early summer, there are conspicuous large panicles — much-branched inflorescence — of small flowers with five white petals and five-lobed green sepals.

Lemonadeberry (Rhus integrifolia) is an evergreen scrub with dark green, leathery, oblong-elliptic leaves that have serrated margins. White to pink buds and flowers are clustered at the end of branches, mostly from February to May. Distinctive drupes somewhat the shape of cornnuts have a sticky coating that, as the fruit matures, turns web-like with the fruit becoming red-orange in the late spring or summer. The coating has a tart taste, thus the name “lemonadeberry.”

Both laurel sumac and lemonadeberry are related to mango and poison oak, so people may be allergic, though they are not known to have urushiol oil as found in mango rinds and poison oak resin canals.

Once past the Quince bridge, the dirt path is smooth and at times next to a seasonal stream bed. Plants seen here include palms, oaks, wild radish, nasturtiums, and elderberry, with prickly pear cactus along the canyon sides. 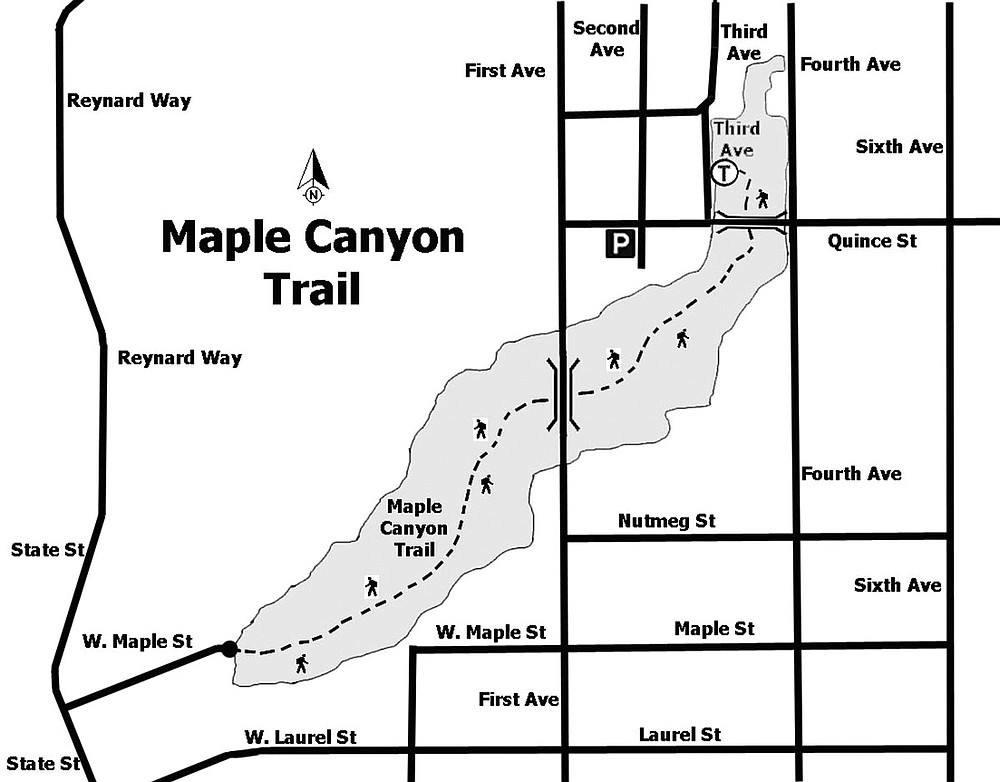 Further down, the trail passes under the First Avenue Bridge that is still the city’s only steel-arch bridge. It was built in the Midwest then shipped to San Diego to be reassembled in place. The bridge underwent renovations, finished in 2010, that included seismic retrofitting and restoration of the bridge to its original 1931 appearance.

Toward the end of the trail, there is evidence of plantings of native plants and a banked area called a detention pond, designed to hold water temporarily to allow for drainage. Once reaching the gate, either turn back or walk down W. Maple Street, stopping to view the mid-century Statehouse before turning west on W. Laurel Street then south on India Street to tour Little Italy before returning.

Hiking length: approximately 2 miles out and back.

Difficulty: Moderate with elevation gain/loss of 200 ft. Dogs are allowed on leashes. Trekking poles help along the steep areas near the trestle bridge and on the return trip. There are no facilities at this trailhead.