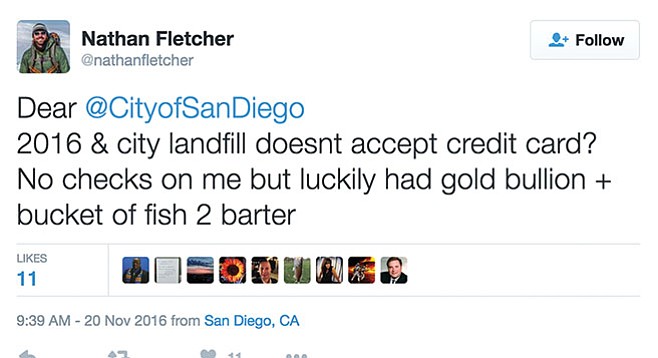 Onetime Republican assemblyman Nathan Fletcher, who switched his registration to independent when the local GOP declined to endorse him for San Diego mayor — and later flipped to the Democrats after he went to work for Qualcomm, founded by billionaire Democrat Irwin Jacobs — is taking a tool from the Twitter kit of president-elect Donald Trump. Now being talked of as Qualcomm’s candidate for county supervisor to replace the termed-out Ron Roberts, Fletcher went up on Twitter recently to complain about city disposal practices.

“Dear @CityofSanDiego,” tweeted Fletcher, “2016 & city landfill doesn’t accept credit card? No checks on me, but luckily I had gold bullion + bucket of fish 2 barter” A quick response was tweeted by city hall, where Republican mayor Kevin Faulconer has been, like Fletcher, a major beneficiary of campaign cash and fundraising support from Qualcomm execs. “Working on system upgrade for credit card payments at fee booths,” said the message. “Thx!”

Fletcher, who during his makeover into a Democrat split with wife Mindy Tucker — a former top media aide in the administration of GOP president George W. Bush — also tweets frequently about his current significant other, Democratic assemblywoman Lorena Gonzalez, and she reciprocates. “Watching him speak never gets old,” said one recent post.

Gosh, I sure wish Mayor Sunny were as responsive to years-long complaints from City constituents who have to hold their noses against stench when visiting once-scenic-now-stinking La Jolla Cove. Along with departing City Council representative Sherri Lightner -- who admittedly has much less power than the Strong Mayor -- Hizzoner Kevin Faulconer has been AWOL on fixing this disgusting state of affairs. It's a lot worse than a policy of no credit cards at the dump.

As for Assemblywoman Loretta Gonzalez's hilarious comment about being enthralled by her boyfriend's speaking skills, well, it's charitable to call that proof of love being deaf as well as blind. And by the way, we don't want pseudo-Democrats Nathan Fletcher OR Tony Young for County Supervisor either.

If I am not mistaken, she fought for pay increase, for a handful of NFL cheerleaders in California, all the while hundreds of thousands of Californians were subjected to wage theft. Calderon finally took some action only to be indicted. At any rate, neither one of these two should be in public service.