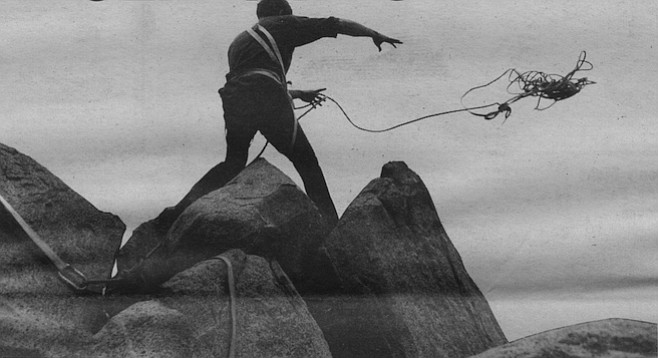 Some millions of years from now, the San Jacintos will look the way the White Mountains in Vermont do now: soft and rounded. The Sierras of Yosemite are granitelike quartz diorite, like the San Jacintos. But glaciers carved Yosemite’s steep-walled canyons, domes, and cliffs; the steepness of the east side of Mt. San Jacinto is due to a large fault that parallels the San Andreas fault. Climbing Tahquitz is very much like climbing El Capitan in Yosemite. 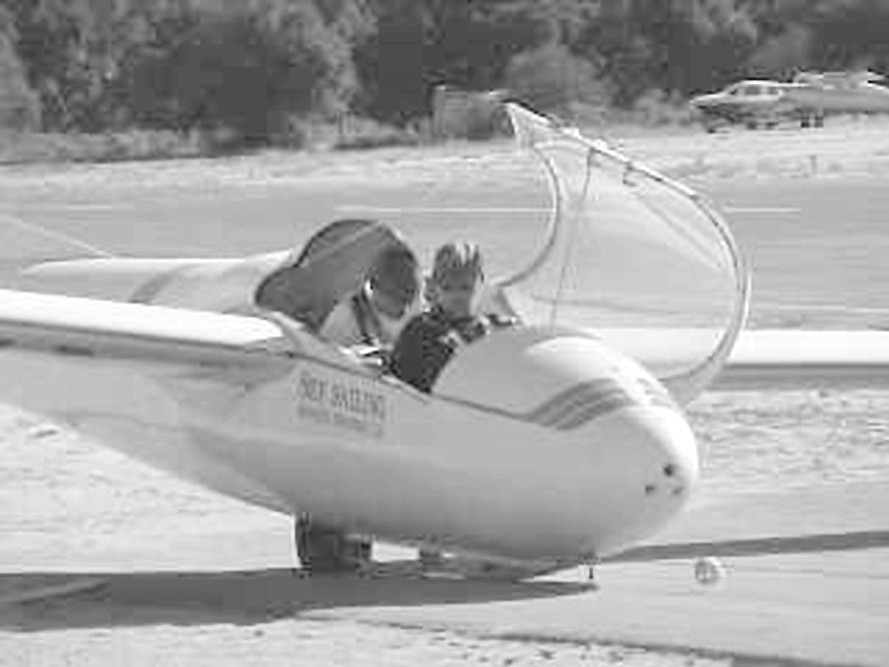 "Now follow me through on the controls as I turn to Lake Henshaw…” I can feel him put in left stick and pedal.

The tow plane pulls us up at about 400 feet per minute in a slow right turn. I’ve got my right hand on the stick, my feet on the rudder pedals, and I can feel Willat moving them on his duplicate controls in the backseat. Below us, Highway 79 snakes its way north toward Temecula and south to Santa Ysabel. To the left and straight ahead, the mountains loom up. 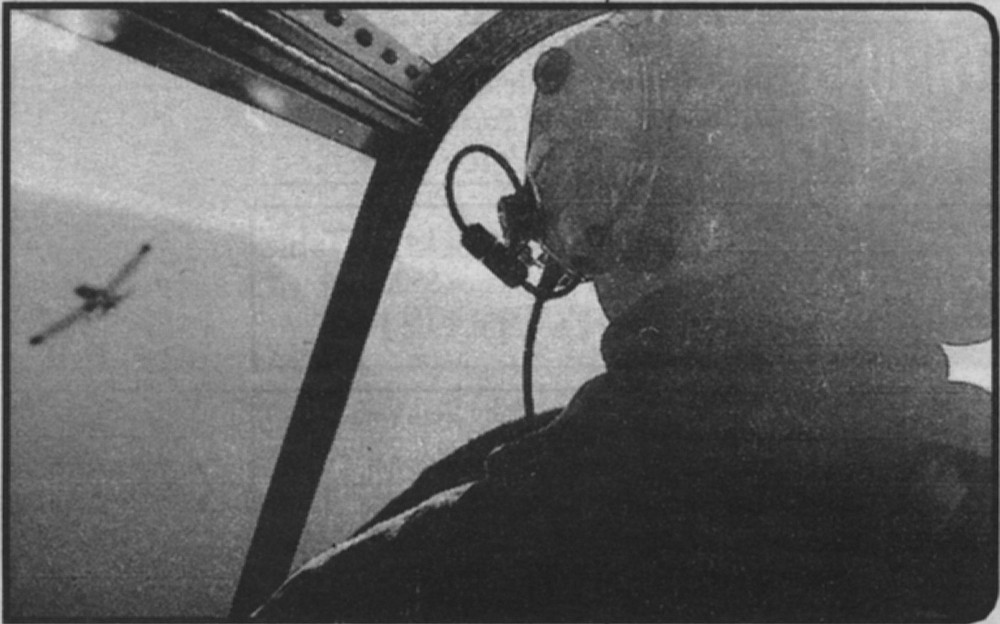 The author takes flight. “That was great,” Matt says. “Now let’s have a dogfight.” 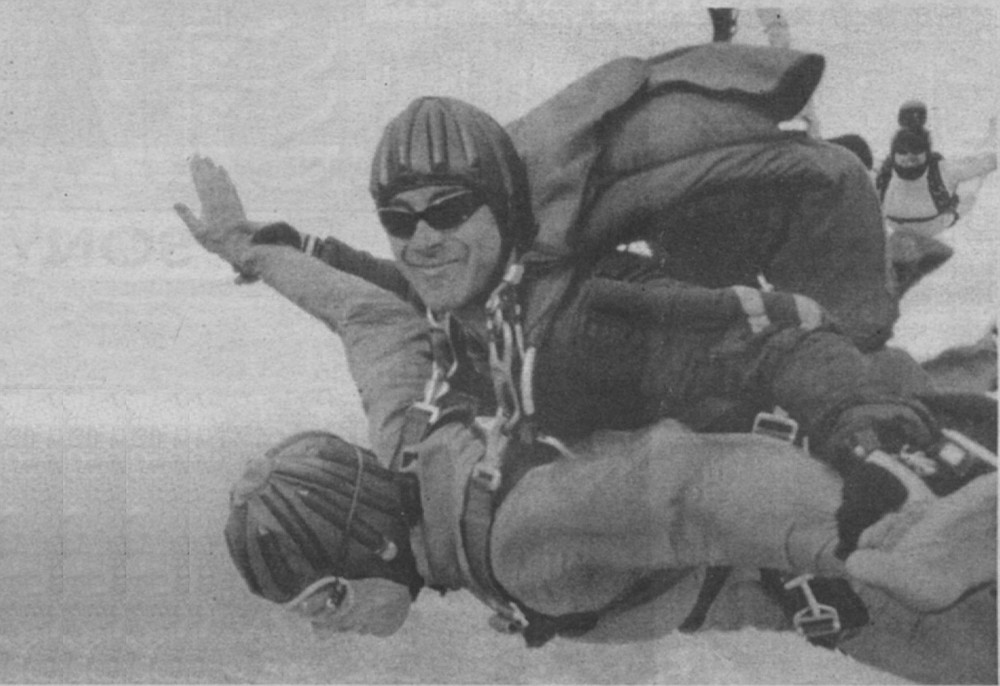 The author (face down) and Tim Ige. "I grab my jumpsuit, where I think the ripcord handle should be, but it’s not there."

After half a minute of falling, Tim reaches around and waves his hand in front of my face. I grab my jumpsuit, where the ripcord handle should be, but it’s not there. I pat all around the spot, but I can’t find it. I lean forward, trying to see it, but the flapping fabric hides it. I start to feel the beginnings of panic in my gut when Tim reaches around and pulls the cord for me. Robb Field. "The straps on the elbow and knee pads had been tied into knots by previous renters."

The camaraderie among skateboarders goes beyond advanced skaters tolerating beginners and into the realm of solidarity. “Totally,” he said, “because there’s an us-against-the-world feeling. It’s the last kind of rebel-spirited outlaw activity that hasn’t sold out. Surfing…sold out. Snowboarding... start at the beginning of the season, and you’re a pro by April. There’s much more of a dedication and a cultural vibe with skateboarding. And part of that is because skating is not for everybody.” Rumors would arise of an empty private swimming pool somewhere, and the skaters would show up with brooms and plastic bags to make the place ridable.

Skaters found that they could understand this kind of mock ritual violence. Self-abuse was the skater’s way of knowledge, and they flashed their scabby elbows and lacerated shins like credentials. You started to see skateboarders with mohawk haircuts or black pompadours, ragged jeans, chain wristlets, and high-topped basketball shoes. They talked about ‘‘shredding’’ and “ripping” and “thrashing” and “grinding” as though their sport was mass murder instead of riding a wooden board with plastic wheels. Diver approaches garibaldi: “I reached out for it and saw its thick orange lips purse in reaction, then blow. That mysterious bumping sound!”

It was September 14, 1974. A buddy and I submerged at 11:03 a.m. off Alligator Head west of La Jolla Cove in twenty-five feet of water on a sunny and flat day. As we swam around the point toward the small rock reefs off Boomer Beach, we spotted a large gray shape about 300 yards offshore bobbing along the bottom in the light surge; we approached slowly and saw that it was a dead dolphin. Most people imagine someone who says ‘dude’ a lot.

“When P.B. [Surf Shop] started to take their skate department more seriously, Larry Gordon of Gordon & Smith decided to go into manufacturing, and this is also when I won the first major contest of San Diego. All this was happening while the urethane wheel was proving itself with precision bearings, and Bennett Trucks were beginning to roll off the assembly line. In early 1975 the first World Contest was held in San Diego.”