Jason Lee isn't a kid anymore, so who's taking the next surf-rock set? 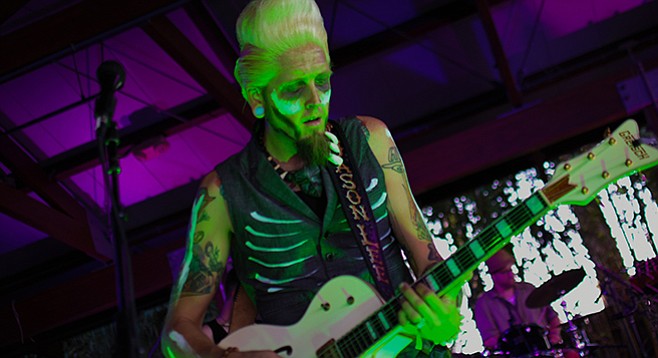 Local surf rocker Jason Lee and his bandmates are putting the finishing touches on their sophomore release, Monsters and Mai Tais, due out in Spring, 2017. Featuring members from both of his bands — the R.I.P. Tides and the Black Tides — Lee describes the concept album as “very emotional but super high energy. Think a whole day at Disneyland and hitting all the rides!”

Jason Lee and the R.I.P. Tides

...live at the Arizona State Fair

A resident of Bonsall, Lee has been playing San Diego bars for 20 years. Lee formed the R.I.P. Tides in 2004 and released their debut album on Dionysus Records in 2014.

“A few years ago we needed an outlet to play some of the softer material we were writing,” he says, “so the Black Tides formed as a side project that could play high-quality bars and corporate events without blowing your face off like the R.I.P. Tides do.”

Made up of eight members (including go-go dancers), Jason Lee and the R.I.P. Tides are known for their supercharged performances. At this year’s Tiki Oasis, for example, the band played a late-night, three-hour show in one of the Crowne Plaza Hotel’s rooms. “We just cranked up the amps as much as we could and went all out. We want to put on a wild show, even if it’s just a room party.”

When Lee isn’t busy recording or performing with the Tides, the guitarist can be found working in the Kiesel/Carvin Guitars custom shop or writing retro rock and orchestral scores for TV networks, including A&E, Discovery, and Spike. “I’ve done everything from Shark Week to Duck Dynasty.”

After two decades in the music business, Lee has done all he could to advance instrumental surf rock, but he concedes that it’s up to his successors to take it forward. “The surf-rock genre is at a high right now. It’s taken years for it to build back up, but I see even more future potential in surf now,” he says. “I’m not the young kid on the block anymore. We need to look to newer acts that will create a ‘fourth wave’ in surf music years from now.”

Catch the Tides at Til-Two on November 19.