San Diego lifeguards in winter – what do they do? 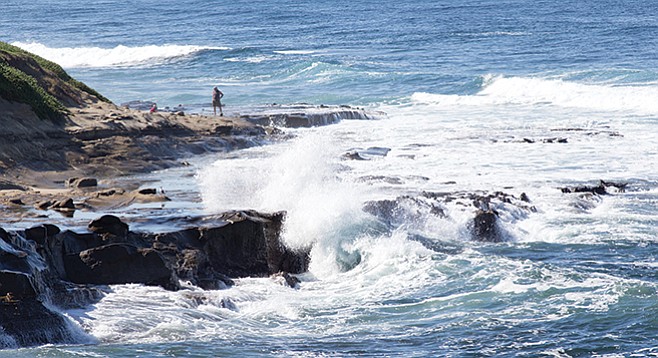 Tanned bodies, shimmering sand, and a touch of glamour. That’s the life of the lifeguard, right? But as I stand in the lifeguard tower just south of Casa Beach in La Jolla, the images of shlock television are hard to see. There’s a storm coming, and Amber Prestegard hopes she won’t have to rescue tourists unprepared for 59-degree water and large swells. With a no-nonsense demeanor (probably “tough as nails,” I’m thinking) but sans a tan, she looks more than capable of effectuating a foul-weather rescue. 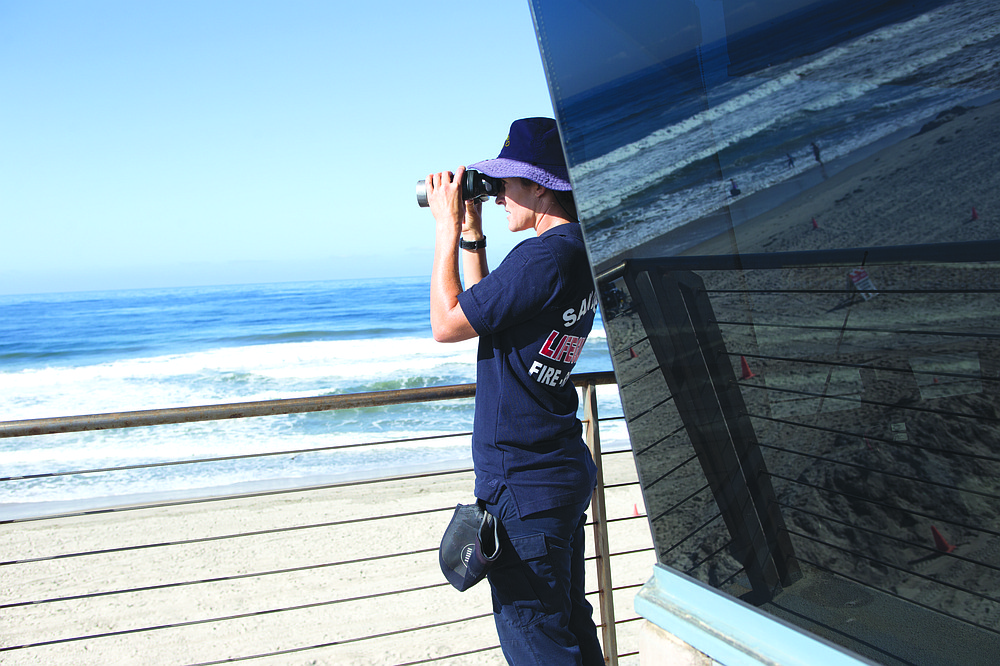 I’m here on an overcast Thursday morning in early March. Things are pretty quiet right now in La Jolla, so quiet in fact, I’ve even found a place to park. Prestegard, 34, who started at Huntington Beach in Orange County, has been guarding the sands of San Diego for 16 years. You’ll find her at Casa Beach adjacent to the pinniped feces preserve sometimes known as Children’s Pool.

While there are fewer rescues during the winter, they tend to be hairier and scarier for both the hapless and the hero.

I ask Prestegard, “If you need to rescue someone, how long does it take you to get to the water?” With nary a trace of boastfulness, she answers without hesitation, “Five or six seconds.” As I look down from the tower, which is a cozy plastic pod with a million-dollar view, the water seems pretty far away. To reach it, you’ve got to fly down a set of narrow metal stairs that lead to a phalanx of jagged rocks and a steep path to the surf. I surmise that even the most nimble among us would need at least a minute or two, but to a lifeguard, that’s an eternity.

San Diego lifeguards’ territory extends from Sunset Cliffs north through Black’s Beach, with 9 main stations and close to 30 seasonal towers. For the lifeguard, it’s all about numbers. “During winter,” notes Prestegard, “thinner staffing means longer response times, maybe up to five minutes instead of one; it can turn a routine rescue into a critical one. In the off season, we call it our ‘skeleton crew,’ when there are minimal lifeguard personnel to protect certain stretches of beaches.” But she reassures me: though a bit slower to arrive, help is on the way. “All beaches are staffed with at least two permanent guards throughout the winter at the main stations: Ocean Beach, Mission and South Mission beaches, Pacific Beach, North PB, La Jolla Shores, the Cove, Casa, and Black’s.”

Although the San Diego Lifeguard Services defines “winter season” as October 1 through March 31, the calendar is often trumped by the vagaries of weather.

“San Diego is a destination spot for vacationers, very weather-dependent during winter,” Prestegard elaborates. “In the off-season when you have four-foot-plus surf and temps in high 70s to low 80s — which we’ve had in January, even — it overwhelms us at times with just permanent staff. The seasonals are often still working in September and early October, but not usually during November through March.”

(“Summer” in local lifeguard parlance, runs from April 1 through Sep 30; the peak season starts on the second Friday in June and runs through Labor Day weekend. The permanent lifeguard squad is100-strong, with 200–250 added during the summer.)

“If something goes down and we don’t have enough people, we’ll question ourselves, ‘Could we have had more personnel on the beach?’ Let’s say there’s a swimmer or a surfer going out in a rip current at the San Diego River in O.B. In the summer, we’d usually have a Tower 5 or 6 guard on that stretch of beach, or if not, a truck patrolling it. In the winter, though, we’ll respond from the main station, which is by Newport and Abbott, so we have to drive the truck on the beach all the way down to the San Diego River, hop out, and swim to the victim. It could be five minutes longer.”

For the beachgoer, off-season can offer solitude as well as danger. I ask Prestegard, “Are there days when you might be almost alone on the beach?” “Sure,” she laughs, “on some really windy, rainy days, on some of the pocket beaches like Marine Street, Wipeout, and South Casa [in La Jolla], it’s pretty deserted. If it’s stormy, there are fewer people on beach. When the ocean is like ‘Victory at Sea’ with whitecaps, you don’t see too many people in the water or even walking on the beach or on the boardwalk.”

“During the summer, we’ll have at least two or three people on a critical rescue, but if it’s a critical rescue during the winter, we might have just one initially, with a jet ski or a boat coming to back them up. In winter, it’s boat rescues, flipped vessels due to high surf and big swells. We get some kayakers who are weak paddlers trapped by high surf at the back of La Jolla sea caves, and sometimes people clinging to outriggers capsized in the Mission Bay channel.” Prestegard adds, “Off-season brings tourists, often weak swimmers. But there are also the stronger, avid swimmers; we recognize the regulars. They swim, summer or winter, with fins. La Jolla Cove remains active because it’s all over the internet; people still want to swim to the ¼-mile or ½-mile buoy.”

San Diego’s most hazardous beaches in the winter? 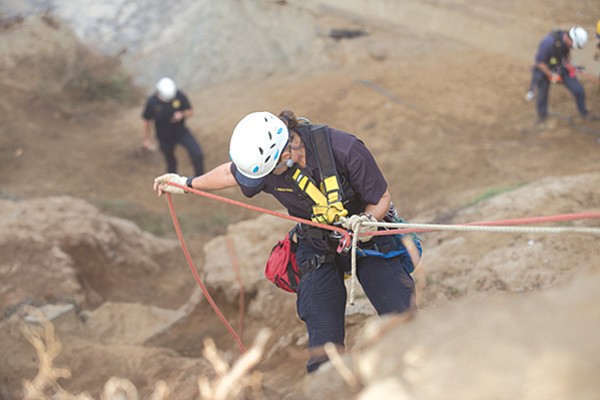 “Sunset Beach can be quite dangerous because you have to enter from the cliffs, scurry down some rocks and jump into the water. There are boulders underneath, and depending on the tide, if you don’t jump right, you can bottom out. But every place can be dangerous during large surf; it all depends on the time you’ve spent in the ocean and how comfortable you are with your ability.”

According to Prestegard, many of the most dramatic rescues aren’t in the water but take place on the cliffside paths that wind down to Black’s Beach. After a rain, as the slip ’n’ slide factor ramps up, hikers go down, occasionally requiring intervention. Even as mud, booze, bad shoes, and bad judgment conspire to leave the hapless hanging, Prestegard notes that the San Diego Lifeguard Service is ready with training and tools.

I ask, “Do you find that people do foolish things that cause you to rescue them?” 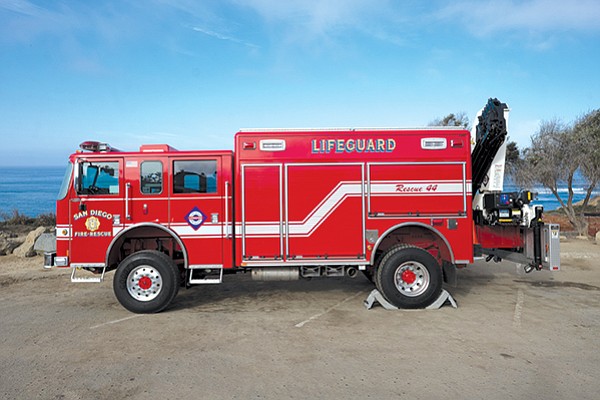 “All the time; that’s why we have a job. During the winter, we get some crazy cliff calls; after it rains, it can get pretty dangerous at Black’s. We have a new vehicle, Rescue 44, that we’re training on; it looks like a fire truck equipped for rescue with a boom which lets us go up the cliff.” As for the typical water rescue, she says, “We use either a swimmer or a jet ski. If we have the jet ski in the water, that will go first. If not, we’ll respond from our truck on the beach and either swim out with a can [flotation device] or take a rescue board.”

Is it riskier for lifeguards during winter?

“Sure, you’re always taking a risk when you enter the water in large surf, but that’s what we train for. We train a lot more during the wintertime. This morning, before I started my shift, I swam 1800 yards at the La Jolla High pool. We have a training day every other Wednesday: scuba diving; cliffs and ropes training; river rescue training; boating training at the dispatch tower; personal watercraft training; CPR; EMT training; Rescue 44 operation training; and training on Marine 3, which is our new fireboat.”

Before I leave the pod and leave Prestegard to her watchful solitude, I focus for a moment on the cold swells pounding the rocks. “One more thing: do rescue swimmers wear wetsuits in the winter?” 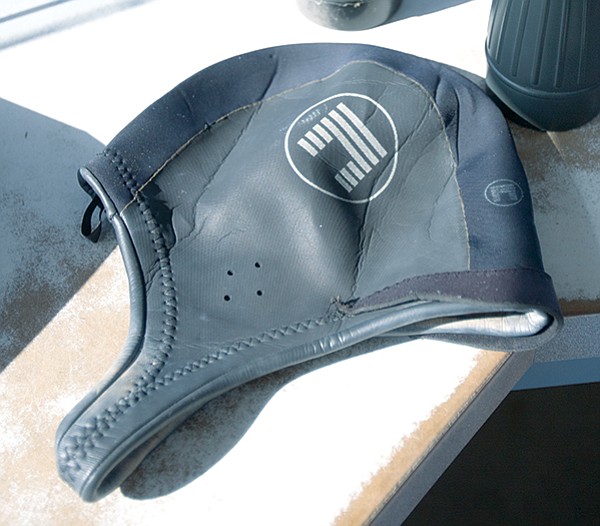 “It depends if you have enough time to put on a wetsuit before you enter the water. You lose 90 percent of your body heat out of your head, so a lot of us have a kind of cap which goes over your head. You just throw one of those on. We call ’em ‘squid lids.’”