Dizzy's is a state of mind 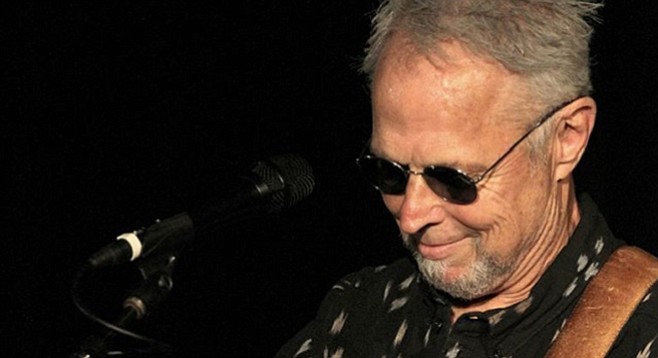 “I’ve been here four and a half years,” says Chuck Perrin, the one-man operation behind Dizzy’s, currently located on Mission Bay Drive at the San Diego Jet Ski Rental. “The building has been sold. I have a few more shows scheduled in November, but the clock is ticking.”

This is the third move in 16 years for Perrin, who started hosting shows in 2000 at the Culy Trucking Warehouse by Petco Park before moving to the San Diego Wine & Culinary Center in 2007. “I’ve actually still got stuff booked into next year, because it’s hard to stop a moving train — even though I’ve tried to slow things down because I knew this day was coming,” Perrin explains after a Joshua White concert on October 28.

“Since I found out about the sale I’ve been looking in earnest for a new location — and for the time being, I’ll be doing some shows at the Musicians Union [1717 Morena Boulevard]. They have a hall down there and they’ve been wanting to do some outreach into the music community and entice younger people to be more involved.”

Perrin was hoping to establish a long-term commitment with the union, but there has been some resistance. “It’s not an easy transition, because there are certain members that don’t think Dizzy’s has a place there. Some of them think that the idea of Dizzy’s undermines what they are trying to do. But a lot of them work here — so it’s complicated. Dizzy’s has always been about having a place where musicians could work on their projects without the burden of commercial pressure.”

Regardless of where he sets up shop, Perrin believes the idea transcends the location. “Dizzy’s is a state of mind. It’s amazing that it’s lasted all of these years, considering it’s not a business. I don’t own anything — I’ve never had a regular place or paid regular rent. I just set up as a pure collective — the shows belong to the musicians — they set the parameters. All I do is facilitate it and parcel out the receipts at the end of the night. It’s kind of an illusion, really.”

Perrin hasn’t given up on a permanent home for Dizzy’s.

“I had this vision of adding a second story to the Musicians Union building that would have a view of the bay and have a club upstairs. We could crowd-source and try to raise the money. I even have an architect who is willing to design it. The place could be run by a nonprofit board and I could pass it along so it could run in perpetuity. They are building the trolley right by the Union Hall, so people could come from out of town and go to where the music lives in San Diego. I still have that dream.”