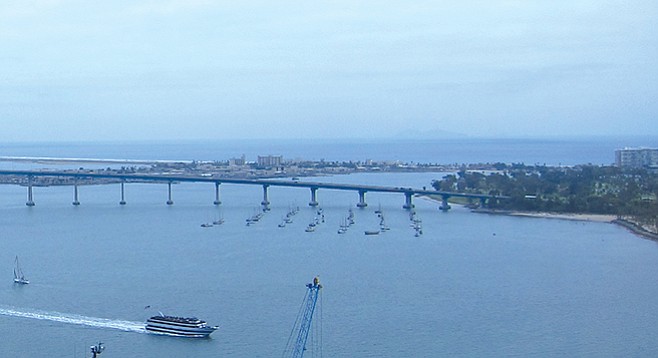 More accidents are waiting to happen. That’s what residents say as Caltrans and the California Highway Patrol investigate why a truck flew off the San Diego-Coronado bridge and landed in Chicano Park on October 15.

Toni McGowan, a traffic-safety advocate in Coronado, considers the accident “the direct result of a long-term pattern of neglecting the speed limit on the bridge.” (The driver was reportedly both drunk and speeding.)

While speeding may be the problem, the solution is a higher wall, Barrio Logan neighbors say. They look up at a bridge with a 34-inch rail and see nothing to stop the next airborne auto.

“I just don't understand why they are doing an investigation and wasting time, when there are four people that were killed,” says Tommie Camarillo, chair of the Chicano Park Steering Committee.

It’s happened twice before: vehicles flying off the bridge, one landing in, and another near, Chicano Park. In 1992, a sailor fleeing patrol cars at speeds over 100 mph went over the rail, and in 2003 another sailor plunged, landing near the park.

“Caltrans is aware of five vehicle departures from the bridge,” says agency spokesperson Cathryne Bruce-Johnson. That includes the recent tragedy, and accidents in 2008 and 2004, she says. Also, Caltrans has “anecdotal information” of vehicles going over in 1999, and another sometime prior. A Caltrans fact sheet says the concrete rails are meant to provide unobstructed bay views — and keep cars on deck:

“Designed with safety in mind, the railings are wide at the bottom and narrow at the top to redirect vehicle wheels back to the roadway with little or no damage.”

As for a maximum vehicle speed the rail was designed to redirect?

“Caltrans is investigating this data,” Bruce-Johnson says. But even if the rail were made higher, speeders could still crash on the bridge — in a confined space where other cars might quickly pile up. In fact, McGowan was advised by the highway patrol that there is no safe place to pull over cars on the bridge. The posted speed limit is 50 mph, which many residents say is ignored.

McGowan sought CHP data on the number of tickets written for bridge speeders between 2009 and 2015; she says she found it hard to get answers locally. Eventually, McGowan got the info from Sacramento. With the 90,000 cars per weekday on the bridge, the ticket data was minute, she says.

To put the numbers in perspective, she contacted the chair of the Coronado Transportation Commission, Patrick Garahan, who calls the ratio of tickets to traffic “infinitesimal, something like .0004 percent of cars being ticketed for speeding over five years.”

When neighbors pushed for enforcement, they uncovered a “jurisdictional quagmire,” McGowan says. The highway patrol regulates traffic on the bridge and are stationed at the toll plaza — but mainly address pedestrians, even though they see the speeders on camera, she says.

Coronado police cover the bridge only to the city sign near the toll plaza, and San Diego police deal with jumpers but not speeders in their city jurisdiction of the bridge, a stretch that extends to its touchdown in the Barrio and Logan Heights, she says.

“I also addressed bully drivers,” McGowan says. Dare drive the posted 50 mph and you will be aggressively bullied, she says. Pulling drivers over on the bridge might cause an accident, but the CHP is unable to do so once cars reach Coronado jurisdiction.

Bruce-Johnson says the CHP Multidisciplinary Accident Investigation Team is investigating the October crash to decide what safety measures are needed. When their report is done, Caltrans will take further action, as recommended. “Caltrans is also conducting its own investigation to determine additional next steps.”

As the work unfolds, Caltrans will keep the community apprised of next steps, Bruce-Johnson says. “We plan to update community leaders and other interested parties in the neighborhood by late November with any new information.” A completion date has not been set.

It is difficult if not impossible to ticket speeders on the bridge because there is no place to pull over the drivers without blocking a lane of traffic. As for airborne vehicles it is only a matter of time before it happens again. The K rail design is for the average car and if the vehicle is larger and has a higher profile, pick up trucks, mid size trucks, vans, etc., the K rail is less effective. One has to question the wisdom of building anything below the bridge but as there is a park and other buildings the railing design should have been sufficient to stop ALL vehicles from going through over no matter the size or speed of the vehicle.

It's an unsafe location. Close the park, for the children!

Hard to fault the bridge designers. The park was built after the bridge went in. The local residents had to wait for a law to be passed allowing parks to be built in underpass areas. Besides, 100 mph pursuits and two drunk drivers can defeat any built-in safeguards. Bridge history is at chicanoparksandiego.com.