Does it fare better the second time? 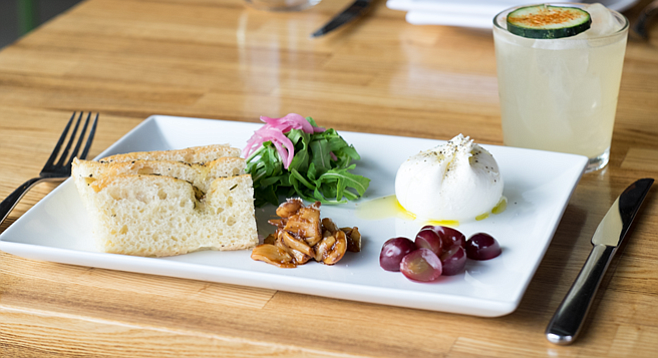 When I first saw the sign for Trust restaurant, I rolled my eyes a little. Was this yet another one of those hippie-dippy joints where each self-important dish has its own 1984-style doubleplusgood name? 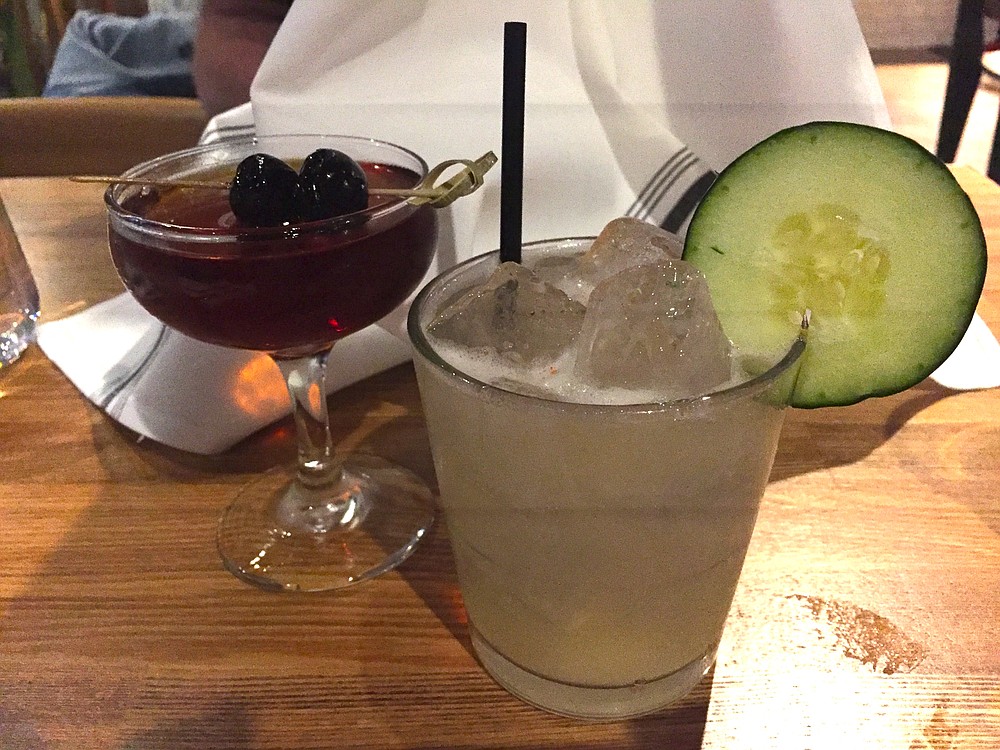 A Manhattan and the spicy Trust Cocktail

After stopping in one afternoon just for a look around and a refreshing and spicy cocktail made with jalapeño tequila and firewater bitters, I breathed a sigh of relief. The menu was diverse and interesting, described by the restaurant as “urban rustic,” and the staff was welcoming and unpretentious. 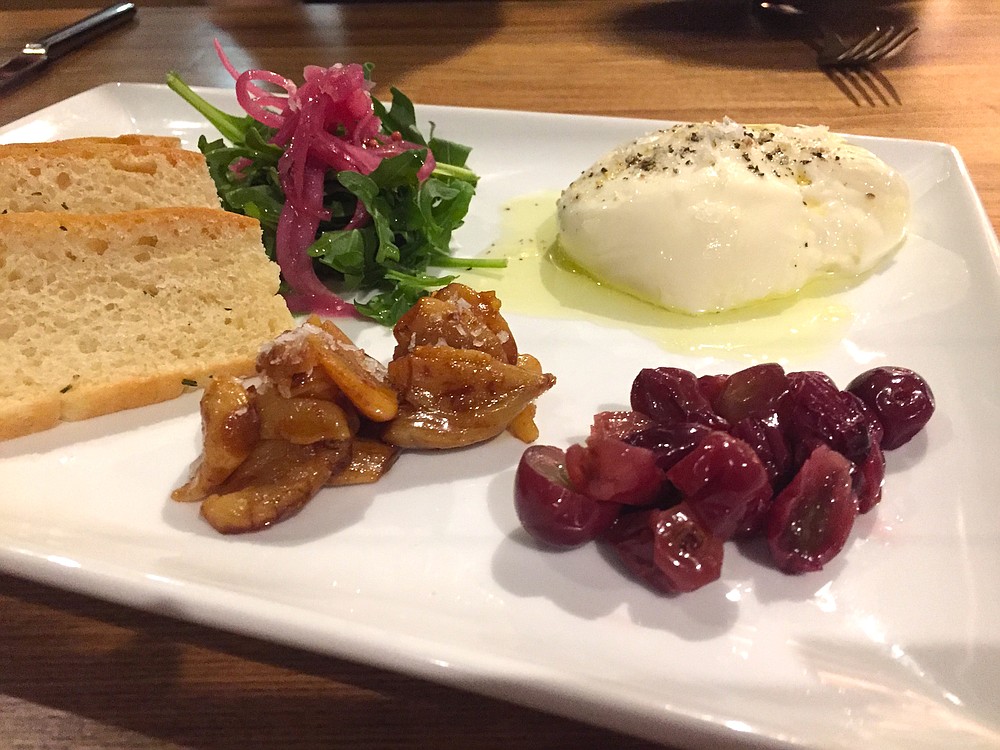 David and I made it in for dinner on a Tuesday night, and the place was packed. We were able to grab the last available table. Taking in the menu, the first thing I noticed were the unusual ingredients being used in otherwise familiar dishes. These are the ones we gravitated toward, beginning with the Burrata, which came with sweet garlic, pickled grapes, house focaccia, arugula, and sea salt ($14). This was my first time tasting pickled grapes, which I’d only just begun to hear about (namely, in an episode of the last season of Top Chef). I expected it to be vinegary, but instead it was a bright, almost tart sort of sweet, which was an excellent complement to the burrata and its generous sprinkling of sea salt. The sweet garlic was made so by the sweet vermouth in which it was pickled. Each item was presented separately, allowing diners to assemble their own flavor combinations. The combo of the pickled grapes and burrata was our favorite. 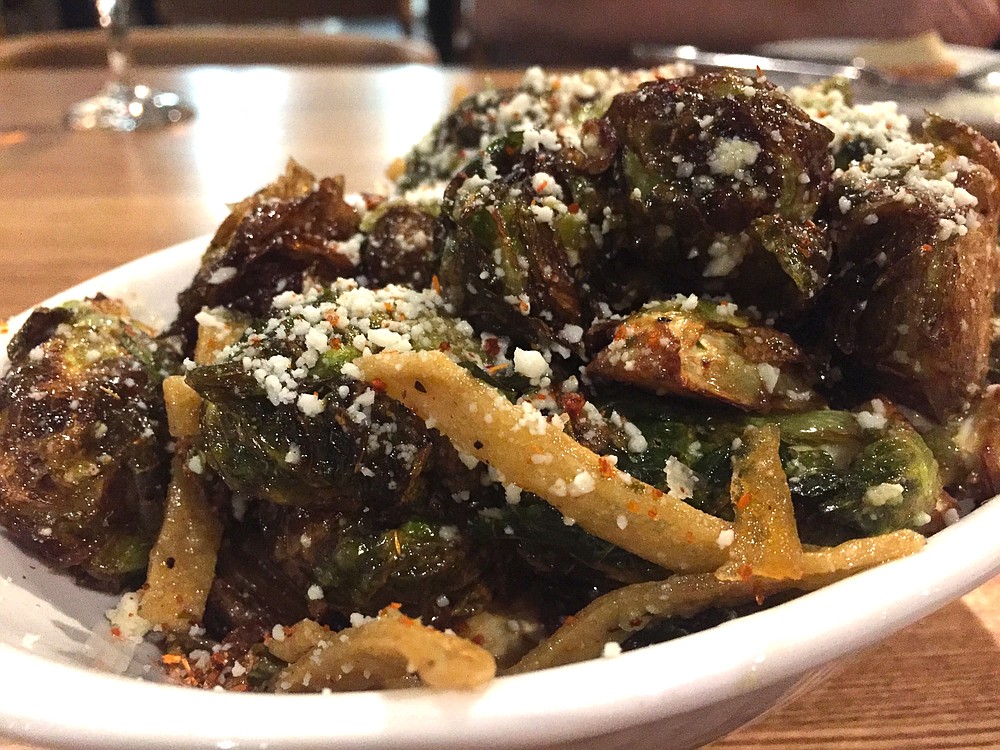 I’ve been over brussels sprouts for a while, especially as we’re well into spring and approaching summer, but when I saw the preparation my curiosity got the best of me. This version ($10) came with tortilla strips, jalapeño vinaigrette, cotija cheese, and tajín. The masa flavor and satisfying crunch of the thick corn tortilla strips complemented the sprouts in a way that made me wonder why this wasn’t the way sprouts were always served. David has vowed to try this at home. We learned from our server that chef Brad Wise found inspiration for this dish after a late night of drinking and a bag of salsa verde–flavored Doritos, which made us like the dish that much more. 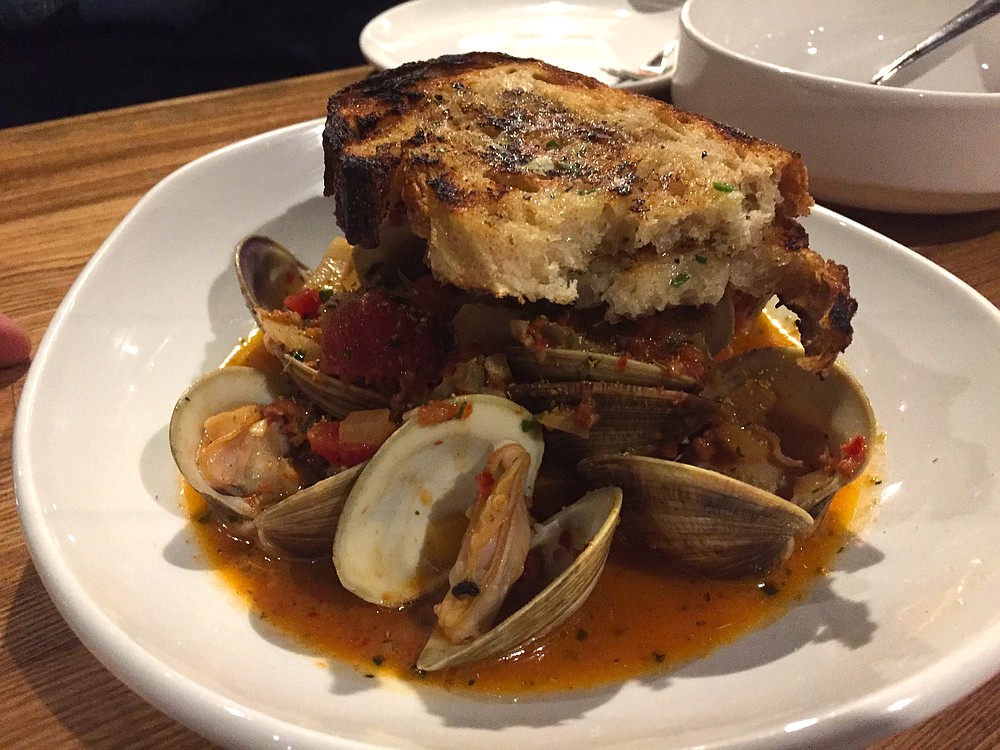 David ordered the Steamed Clams, with housemade ’nduja salami (a spicy, spreadable pork salami), fennel, wine, herb butter, and grilled bread ($14). I’m not a fan of clams. It’s a texture thing. But I did taste the sauce and found it to be spicy and savory, more meaty than briny, and I gladly accepted David’s offer to share the bread so I could sop some up. 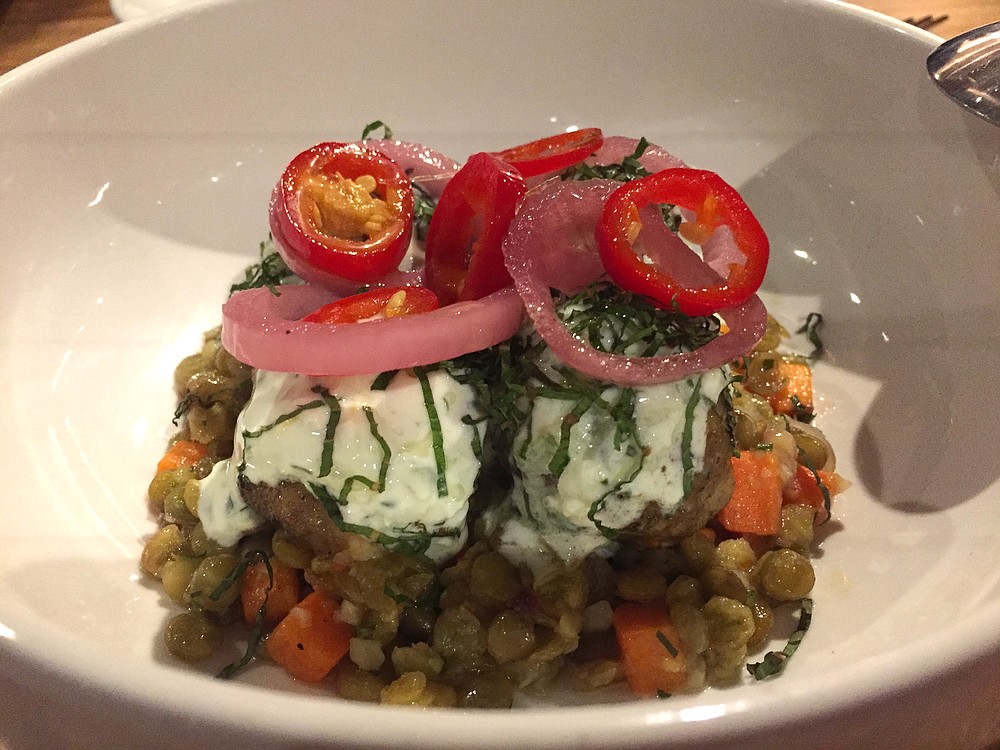 I’ve been on a Mediterranean kick, so I ordered the Wood Grilled Lamb Meatballs ($16) with lentils, tzatziki, pickled shallots, Fresno chiles, and mint. Though all the ingredients melded well, and I appreciated the blend of hot chiles, cool tzatziki, and sweet pickled shallots, something in the dish was overly salted, which eclipsed what would have been a perfect combo. 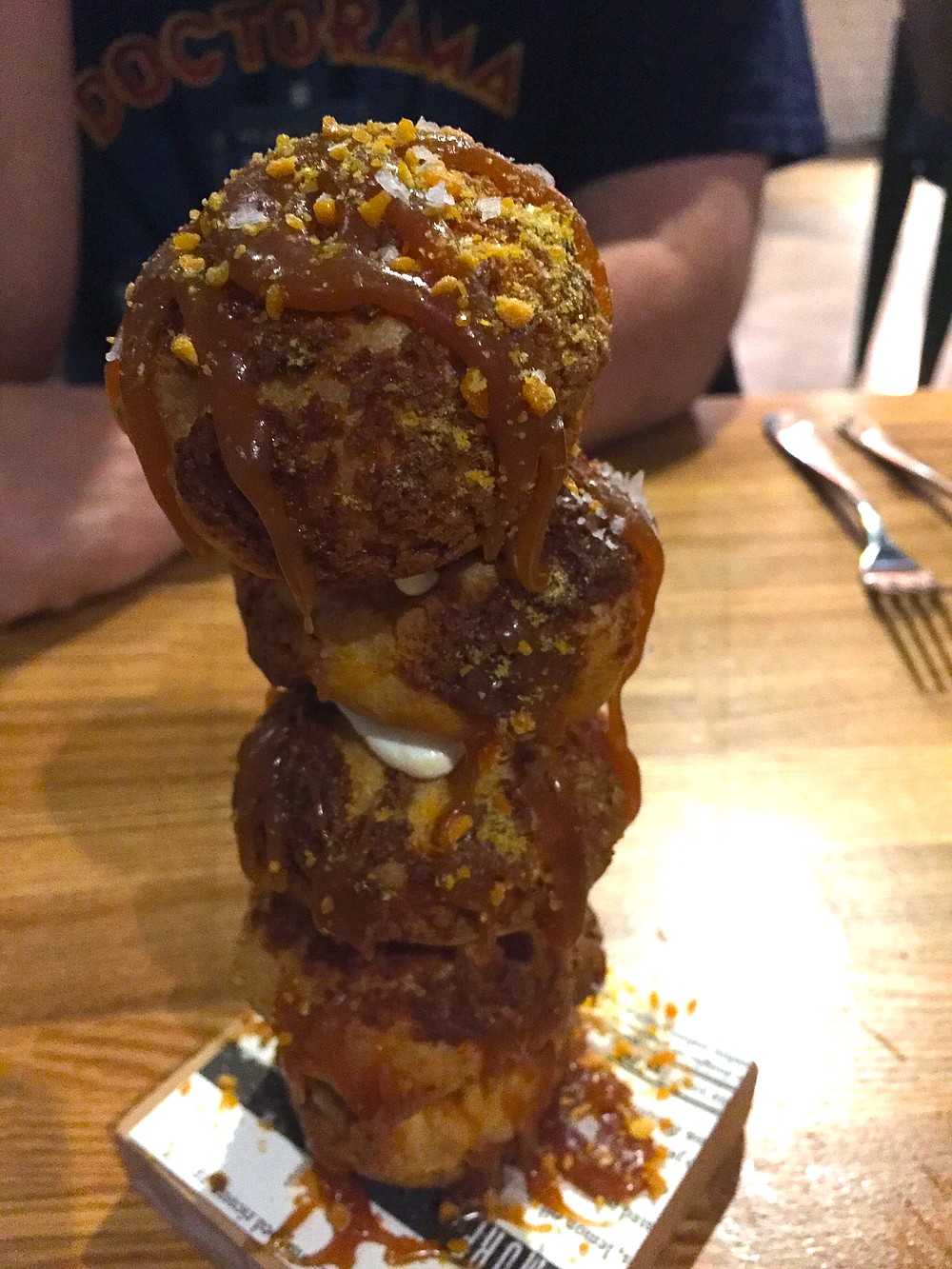 A tower of profiteroles

For dessert, we ordered the Profiteroles — a tall tower of them, each filled to the brim with fresh, cool banana cream and the whole stack showered with caramel. We managed to split only one and brought the rest home to enjoy the following day. David pointed out how unusual but nice it was to have these puffy pastries filled with banana cream rather than the typical vanilla.

There’s a weekend brunch on the patio overlooking Park and Robinson and many other creative flavor combinations that we’re excited to sample. When we return, we’ll be sure to bring a crew so we can taste around the menu.

Doritos salsa verde where my favorite when I was a kid.

But one time I was riding the bus when I was like 11 (in Querétaro) and I ate a large bag.

Barbarella, did you tap your Trust funds to pay for that meal? ;-)

What an affair! I was still swooning over the pickled grapes when I wrote the mandatory 20% tip on the $128 tab. Yes, Trust reached out to try and mitigate their first negative review in The Reader. Perhaps the meal was 'on-the-house."

Funny you should mention it, but they did offer me a free meal to get a "better" perspective on the restaurant. I didn't take them up on it, but don't be too scandalized by the offer. That's actually pretty standard behavior for restaurants these days. That's what they do to handle angry Yelpers.

I don't think Barb got my invite ;)

I don't blame Trust. But I think they need to come down to earth. Perhaps it's high rent, but those menu prices are in the stratosphere. When restaurants ask those kind of prices before they earn a reputation for good food, they are going to earn the reputation for being overpriced and overrated. I'll be keeping my eye on the Yelp reviews. My prediction is Trust will be dust in a year.