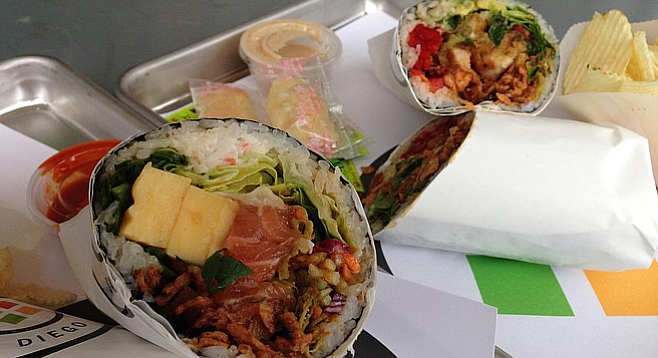 This may be the most of-the-moment restaurant opening San Diego will see in 2016. Convoy Street’s new Pokirrito manages to capitalize on two current fast-casual trends at once, combining poke salad bowls and sushi burritos. Consider the fact it was opened by expanding ramen chain RakiRaki, and we might have to call it a trifecta.

Sushi burritos seem like a natural fit for this town, and when I wrote about the ones offered by Hillcrest’s Rolled Up a couple of months back, readers on social media started shouting out a number of sushi restaurants that have gotten in on the action. Which is cool, but if I’m at a sushi restaurant, with a legit sushi chef, I want sushi — not some mash-up dish. I won’t go so far as to call a sushi joint serving sushi burritos a red flag, but I do think it diminishes the concept. Sequester it to a separate shop, however, where there’s no expectation that hundreds of years’ worth of traditional knife technique will be honored, and I’m all for it. 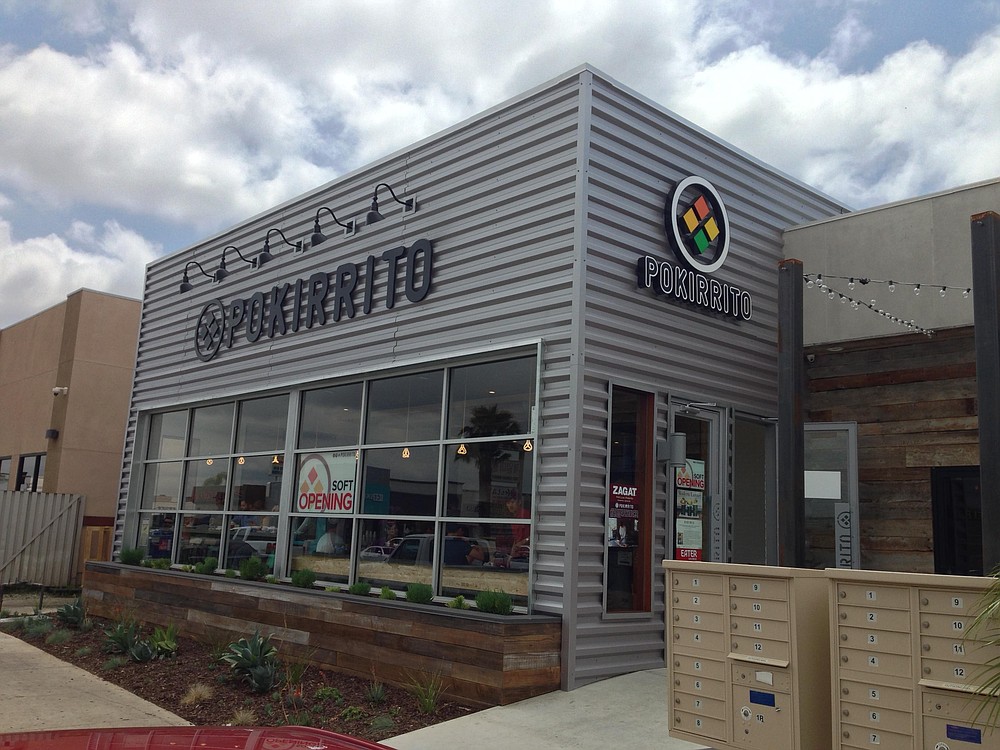 Like Rolled Up, Pokirrito has a funky machine that adds a thin layer of rice to a large sheet of seaweed, raising the question: which came first, this machine or the idea for a sushi burrito? Either way, it works, and if anything the burritos rolled at Pokirrito are bigger than I’ve seen elsewhere — about the circumference of those cardboard coasters served under every pint glass at your local brewery. The list of offerings includes raw ahi and salmon, though I was surprised to discover most of the options featured cooked fish or meat. So I tried two: the Mauna Lani with salmon and the Maui Sunrise, made with karaage chicken.

The fried chicken one also features fried ginger, ginger avocado, red bell pepper, tempura battered jalapeños, butter lettuce, and fried lotus root chips. It leaned a little heavy on the ginger for my taste, but the karaage chicken itself was good, and the ensuing crunch of all the fried elements balanced nicely against the nori and rice wrapper.

The Mauna Lani, on the other hand, was perfect. It also included the lotus chips, which would make a great and interesting crunchy snack on their own. There’s also crab meat, masago fish roe, tamago omelette, the fried jalapeño and butter lettuce, and broccoli slaw.

I can’t say the latter added much to the overall flavor or texture, but with all those other ingredients it didn’t need to do anything but allow me to feel like I’d eaten a helping of cruciferous vegetable. Obviously, the salmon was the star here, and I would have loved more of it. But all the components of this particular sushi burrito worked well together to create a thoroughly satisfying lunch for 12 bucks.