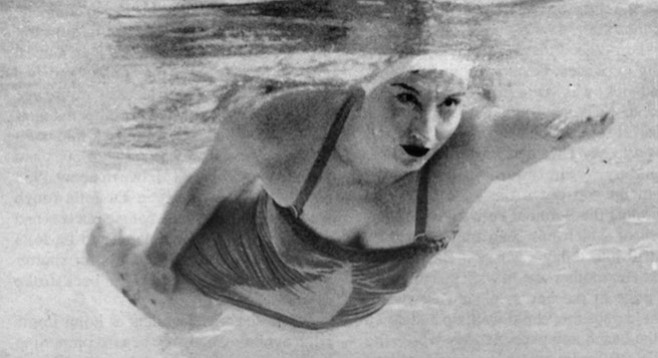 Florence Chadwick in and out of the water.

When she was six years old, her parents enrolled her in a swimming class at the Mission Beach Swimming School.... [A]fter a few months she entered her first competition.... The race was over in a matter of minutes and Chadwick was humiliated; she finished last. Several months later she raced again, this time in a pool in San Clemente. Again she finished last. 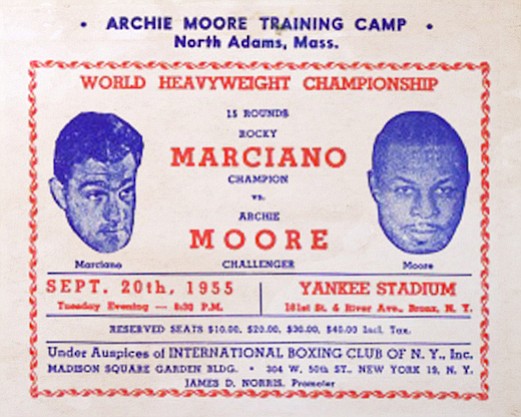 A few rounds with the Mongoose

Although Moore lost that 1955 heavyweight title fight to Marciano in a ninth-round knockout (re retained his light heavyweight title), boxing enthusiasts still debate the match. In the second round, Moore dropped Marciano with a right uppercut to the chin, and the referee started counting. But he continued counting after Marciano struggled to his feet, which Moore claims was a violation of the rules. 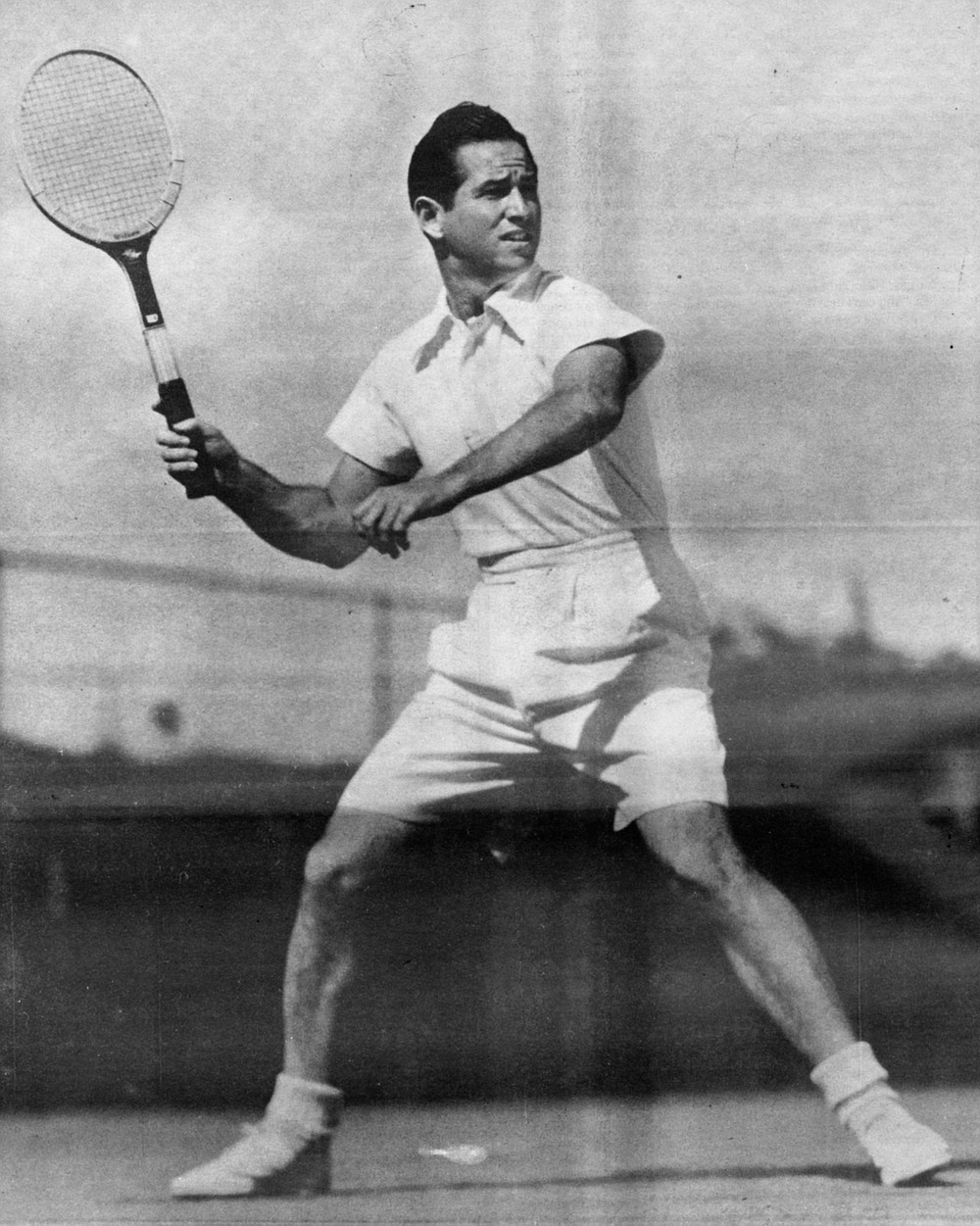 Bobby Riggs, circa 1940. "The grass-court circuit started at the Nassau Bowl on Long Island, then we went to Boston for the Longwood Bowl, then to Seabright, then to Southampton, then to Rye, then to Newport, then the national double at Forest Hills — "

Bobby Riggs, the legendary tennis hustler, has a hundred bucks that says he can beat you. Somehow.

The legs may be long gone, but at 67, the tennis trickster can still outhustle the best of 'em. 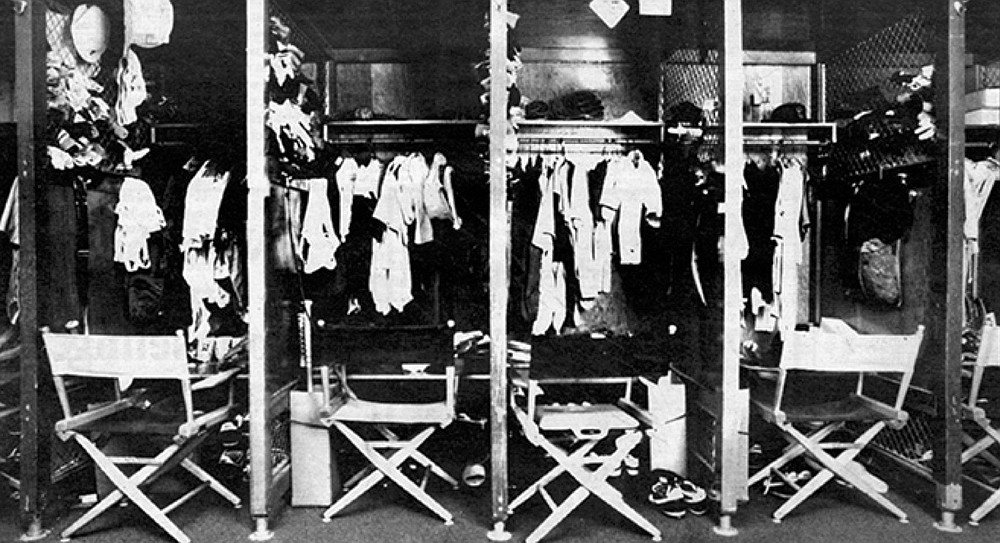 For sheer grotesquery, though, nothing tops the “jackelope” head mounted on a plaque in pitcher Goose Gossage’s locker.

Inside the Padres' lockers

Tony Gwynn sat in a canvas-backed chair and peered into the wooden cubicle in front of him. “What’s in my locker?” he asked, repeating the question that had been posed to him. “Well, here’s a rubber stamp that says “Tony Gwynn’ on it. I’ve never used it. Here’s a ball of putty that I squeezed to strengthen my arm when I hurt it earlier this year. And here’s a media guide from the All-Star game. Other than that,” he said, scanning the walls and shelves of the locker, “I’ve just got the usual bats, gloves, underwear, and shoes.”

Gwynn had overlooked several items, though, including a container of Skoal tobacco, an orange plastic spittoon, and a bag containing a record album by the O Jays. 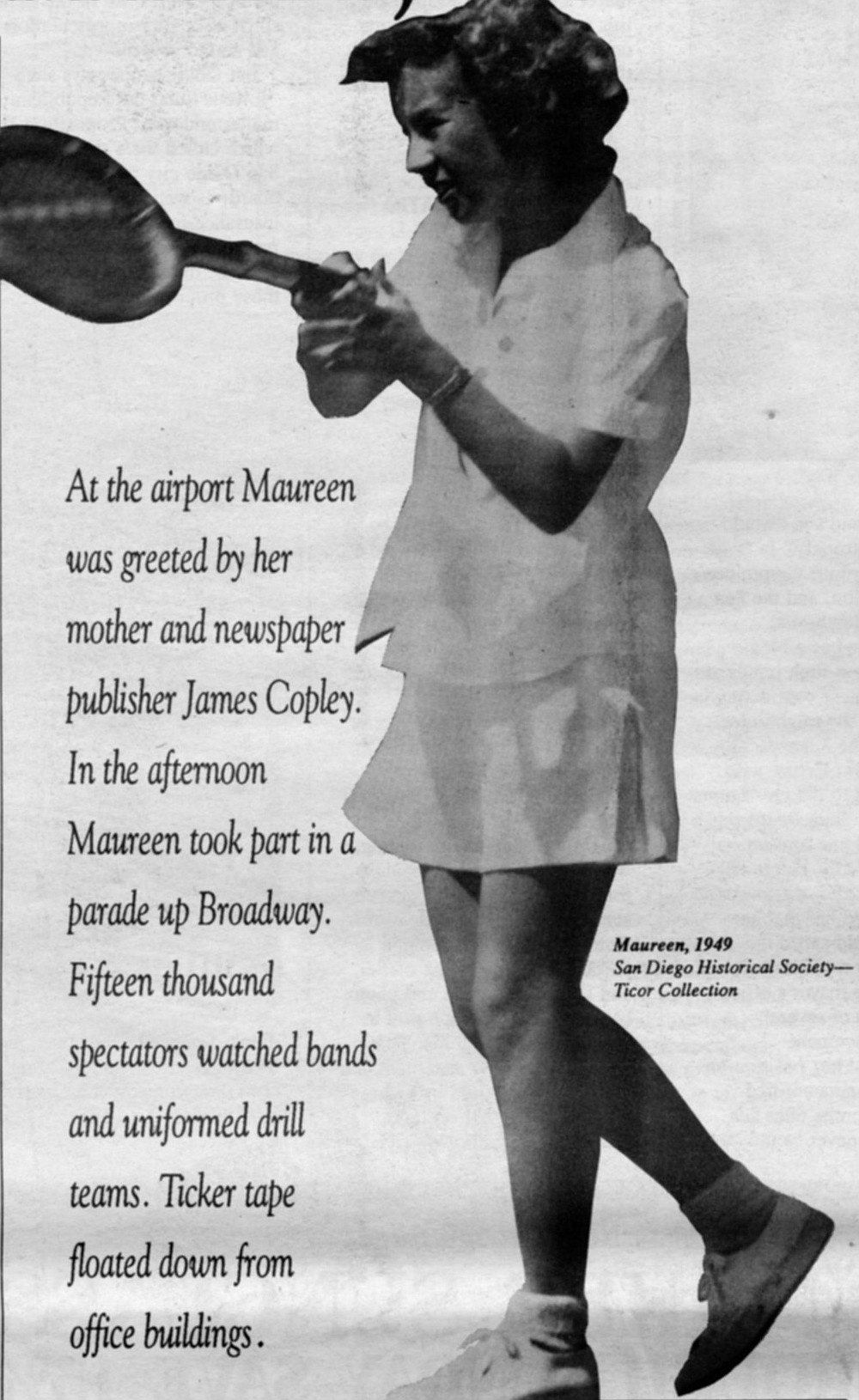 Maureen, 1949. The 1958 personal injury sum was the highest personal-injury award up to that time in San Diego and made Maureen unpopular with some San Diegans. "Many people," she said, "could not understand why I should have won an award in court. I had not been crippled."

In 1949, when Maureen Connolly was 14, she traveled to Philadelphia, where she won the 18-and-under National Girls' Championship played on grass — a surface on which she had never played before. She repeated her victory in 1950 but passed up the tournament, for which she was still eligible, in 1951. Instead, after graduating in June from Cathedral High School, Maureen went east, with Nelson Fisher's wife Sophie as her chaperone, this time to play only in women's tournaments. Two years earlier, Eleanor Tennant had made the prediction that Maureen would be the American champion before she was 17. It would be fulfilled in September. 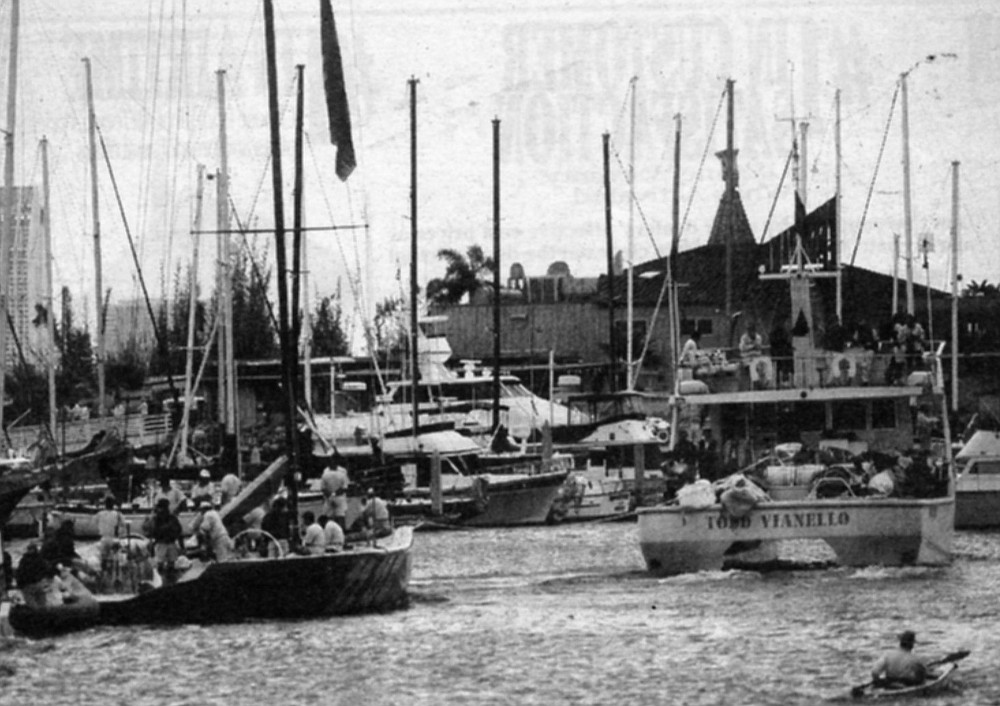 Moro di Venezia towed into San Diego Bay. "He hadn't been at the buoy anchor chain more than 15 minutes when here comes a big powerboat with a flying bridge and Il Moro under tow."

A stirring saga of sea studs.

Through mouthfuls of sashimi, Jack told me how a retired SEAL officer and CIA operative had recruited SEAL Team guys, past and present, for a screwy but potentially profitable commando op: to recon the underwater hulls — and especially the keels — of the 75-foot racing sloops that were being prepared in various boat basins and marinas of San Diego Bay for the 1992 America's Cup. 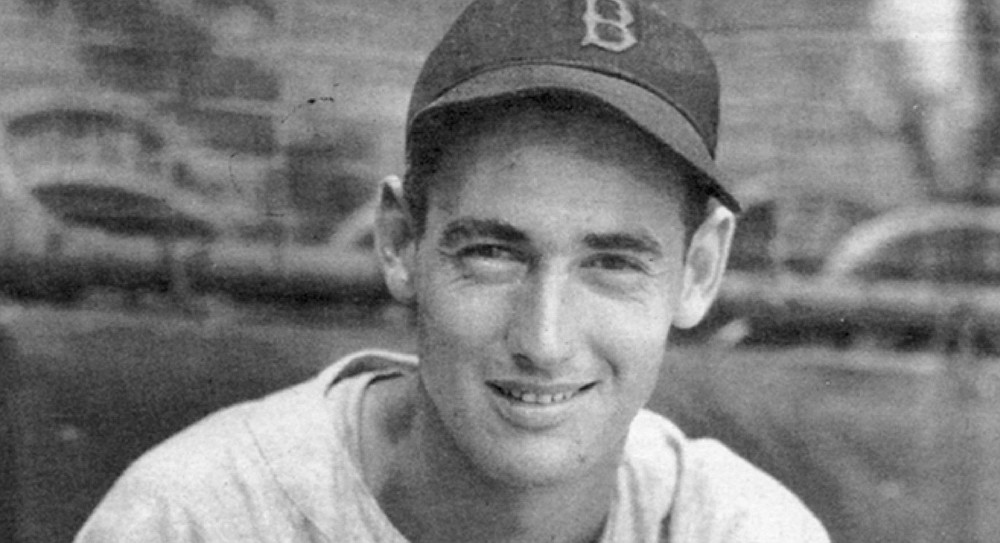 Ted Williams, 1941. "In 1939 my mother and father separated and there was more grief, so I just stayed away from San Diego."

Out of North Park

There was much dissatisfaction in those early depression years. Even as a boy, Ted was a tall, rangy, awkward, remarkably thin lad. He was a nail-biter ("right down to the quick") and highly strung. He confesses in My Turn at Bat to having a "large inferiority complex." Loud, he was also shy — one can cause the other. "Even later, when I first started signing autographs," he later wrote, "I'd hold my head down." At about 12 years old, when Ted's interest in baseball really began and he started staying at the park all day, coming home at noon only for fried potatoes ("That was my lunch"), he saw opportunity for little else to make him happy. 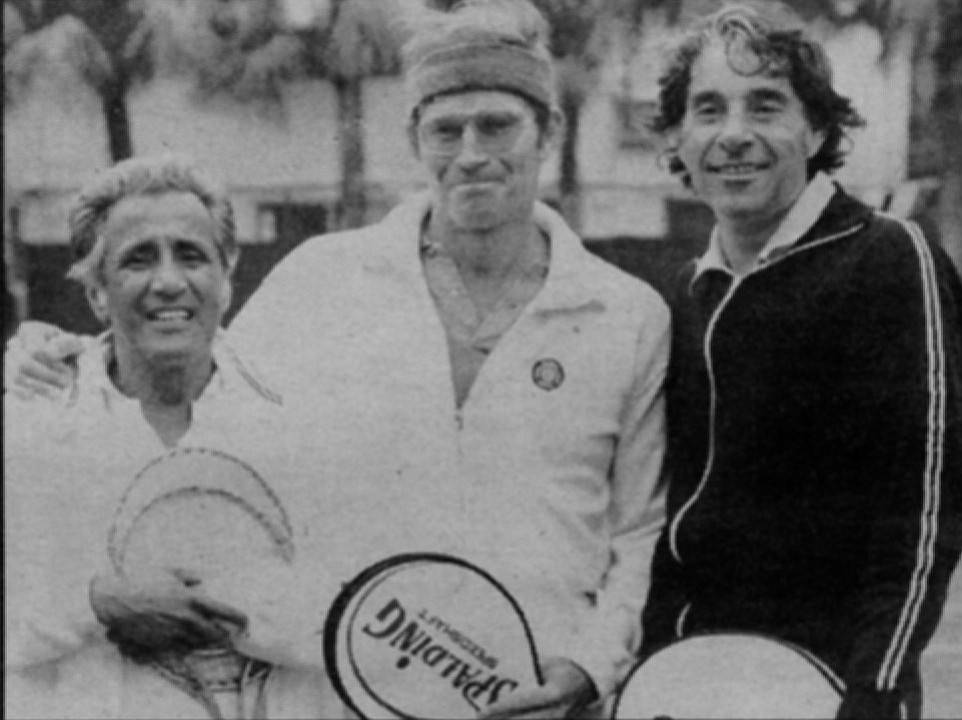 Pancho Segura with Charlton Heston and Pancho Gonzalez. Gonzalez was often moody and uncooperative with promoters and even his fellow players. Segura was able to cajole him into enjoying and appreciating the sport.

The Tale of the Brown Indian and the Stupid Sissy Sport

By the time he completes his 65-minute walk he will have covered five miles through the hills surrounding La Costa Resort Hotel & Spa, his place of employment for the past 24 years. He has raised two children, filled his garage with three Mercedes, and gained the highest level of respect from five decades of his fellow practitioners. These days, he earns as much in two hours as his father made in an entire year.

The man is Pancho Segura, tennis player, coach, a sort of "pro emeritus" at La Costa, and most of all, lover of a game that bills itself as "the sport for a lifetime." He is to tennis what ex-Charger coach Sid Gilman is to passing, what Ted Williams is to batting.